The high mountains of Colorado’s Elk Range are among the finest peaks in the Rockies. With Wilderness designation, these protected mountains are rugged, steep and aesthetically pleasing. Crystal clear streams, pristine alpine lakes and lush green vegetation are common sights.

The scenic beauty of the Elk Range is mostly due to its unique geology. There are two very distinct geological types of rock that are clearly evident in the Elk Mountains, the tertiary intrusives, and the stratified sedimentary. The whitish, gray rock of the tertiary intrusives is responsible for the sweeping, skinny ridges that connect point-to-point, evident in Snowmass Mountain, The Beckwith’s, Capitol Peak and the Chair Mountain massif. Second, the stratified purplish-red, sedimentary rock of the Permian age, evidenced in mountains like Cathedral Peak, Teocalli Mountain, Pyramid Peak, Maroon Bells and "Willow Peak."

Over the years, the Elk Range has have remained in respectably good shape, however some of the northern trails are beginning to show some over-use. Thanks to the Maroon Bells Snowmass Wilderness, we can visit large sections of mountainous terrain knowing not much has changed since early exploration.

Mountaineering in the Elks

The Elk Range has six fourteener’s and four centennial thirteeners. Indeed these mountains are some of Colorado’s most beautiful. However, beauty doesn’t necessarily translate into good climbing. The Elk Range has a reputation for loose and crumbling rock. Like most mountain ranges, some peaks are more dangerous than others; good routefinding skills are of paramount importance. Furthermore, most of the centennial peaks require top physical conditioning and good climbing skills. Only one of six fourteener’s has a walk-up route to the summit. In the Elks, the use of a rope can be more of a hindrance than a tool for safety. The potential for rock-fall is always nearby.

The combination of abundant snowfall and generally steep and narrow valleys, makes access to these mountains a serious obstacle during winter months. Many of the valley slopes are ribbed with dangerous avalanche paths, which limits winter mountaineering to only the most daring and adventurous souls.

If you choose to spend time hiking and climbing the Elks, expect a different experience every time out. The experiences here vary: mostly epic, but occasionally bad. So play it safe and everything will work out fine.

First, The following Overview map is interactive. Second, you will need highspeed internet to utilize this feature; it may take a few seconds to download. The numbered quads correspond to the viewable areas on the Overview map. Once opened, the thumbnails are set up to expand to show level 5 TOPO detail. Expand the image by clicking on the "Expand to regular size" (original size)icon on the bottom right of the image. 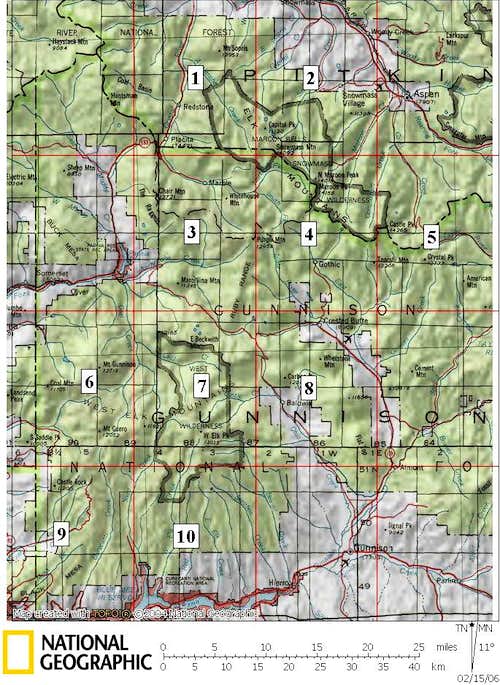 Unnamed, Ranked Thirteeners of the Elks

An officiall USGS Topo of every unnamed, ranked thirteener in the Elk Mountain Range. 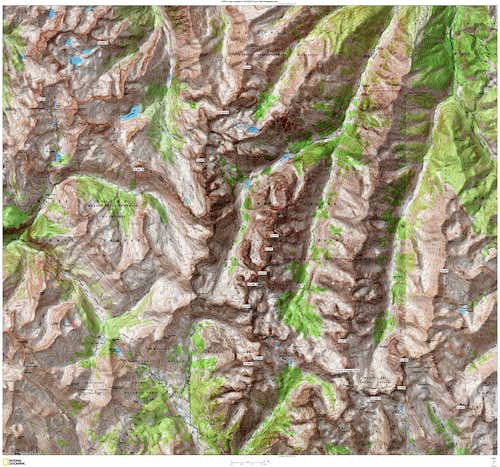 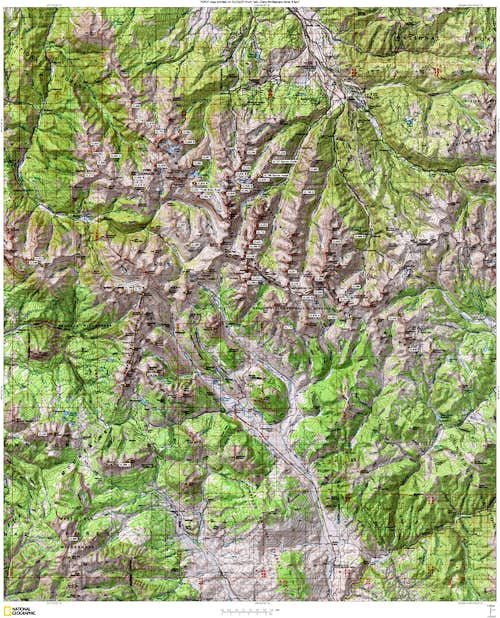 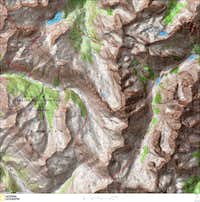 Hey Kane, just fyi, this is also called the more generic "Four Passes Loop" by trail runners and is considered to be among some of the most difficult and challenging of trail runs.

It's possible to do a slight variant on the route suggested - one that allows you to take greater advantage of the fabulous views from the Cathedral-Hayden ridge. Start from the Cathedral Lake trailhead. From Electric Pass Peak, head N directly along the ridge towards Hayden Peak. There are a couple of slightly dodgy segments on the ridge - bad rock and considerable exposure on the Conundrum side - but it's easy enough to get over to Pt 13,540. Then drop down E along the shoulder before heading down to American Lake. Not once, and I've done the route 5 or 6 times, have I succeeded in hitching a lift along the road back the Cathedral Lk trailhead parking lot... Not the best of finishes to an excellent walk that starts and finishes among the summer crowds but boasts an exhilarating centerpiece.