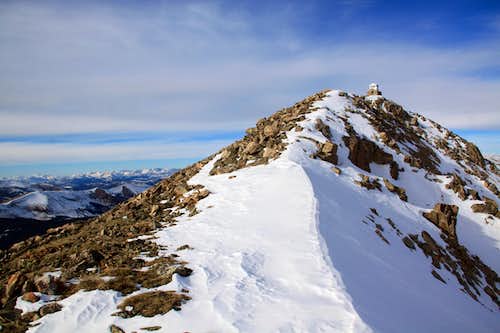 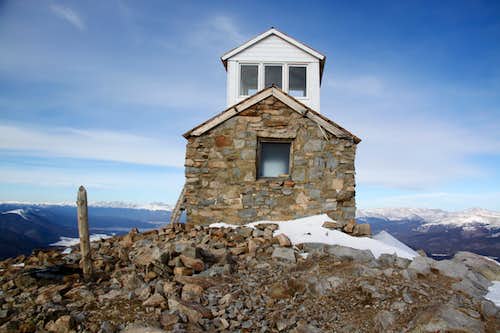 Fire Lookout
Fairview Peak is low 13er located in the western part of Sawatch Range of Rocky Mountains. The peak is pretty isolated and and does not combine well with other ranked peaks. It does offer amazing views in all direction and the summit has a historical building giving it an interesting outing. The building is the highest fire lookout in North America! and it was constructed in 1912.
The route finding is obvious - there is a trail all the way to the summit. During the summer one can drive pretty far up and make it a really easy trip - a couple of hours. The Fairview Peak is kid and dog friendly. I can imagine kids exploring the Fire Lookout building and having fun.
It is also a relatively safe peak to hike in the winter with a long approach via Terrible Mountain Road (the road did not seem that terrible at the end of November 2017). However, expect a long approach on foot during the snowy time - I think I hiked 7 miles on the snowy icy road at the end of Novemer, making it a nice outing (14 miles RT).
The route is oriented towards south, so the snow melts earlier. The road is shady and in trees, expect the snow to last. I found it covered with icy snow and I was able to drive only a short distance past the tiny mountain community of Pitkin. I think this would be a pretty safe mountain to ski during the winter.
Colorado Rank: 472
Parent Lineage: Line Parent: Tincup Peak
Proximate Parent: Henry Mountain
Isolation: 4.57 miles
Class: 1
Nearby Peaks: Fairview Peak is pretty isolated and does not combine well on foot with other 13er, but one can drive over to Fossil Range and hike Henry Mountain.
Fairview Peak History: Fairview Peak Fire Lookout is a stone hut (only one room) built on the summit of Fairview Peak. The Peak is located in the Fossil Range Recreation Management Area outside Pitkin. The lookout is the highest fire lookout in North America. There was a telegraph line was constructed from the town of Pitkin to the top of the peak, a distance of approximately 10 miles. The tower was manned at least until 1916. In 2008, the U.S. Forest Service began the restoration of the fire lookout. 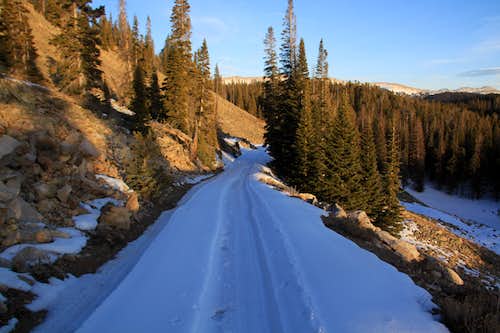 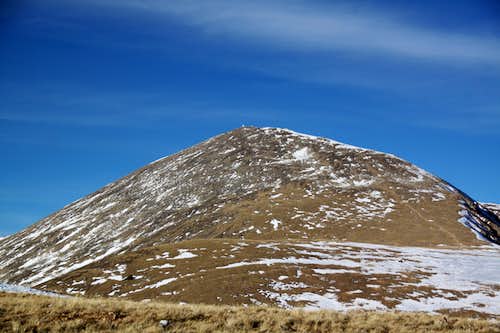 Fairview Peak as seen from Terrible Mountain
From Gunnison drive 12 miles east on US 550 and turn onto CR76 at Parlin. The road is marked for Ohio, Pitkin, Tincup Pass. Continue to the small town of Pitkin (a really small place, population 66, do not expect to find a lunch there).
Turn left onto 3rd street in Pitkin, and after about 100 meters, turn right onto a dirt road going up a hill. (I had to ask after taking a couple of wrong turn in the town). Continue on this dirt, but not bad road (would recommend 4WD high clearance vehicles). You may see a sign for "Quartz Creek Properties". The road enters a forest and steadily climbs up. I parked about 3/4 miles into this road due to icy snow and very slippery conditions, but I would imagine this road being passable to the Terrible Road during the summer (tons of cabin developments high up there). After a few miles, you will come to a split in the road: 766 going right, and 770 going left. Follow 770 as it makes its way across a boulder field and eventually into some cabin development. I was not able to drive this road since it was covered with icy snow and higher up deep snow, but route finding after I got onto this road was easy. It appeared that higher up there were places to park and possibly once could even continue driving past Highline Drive Road and Terrible Mountain Road to just below the summit of Terrible Mountain, 12100 feet.

There is no red tape. Driving the road, parking and hiking are free.

Summer is obviously the easiest time with an option of driving 4WD road up to Terrible Mountain.

There are some primitive campsites along the road. A developed campgrounds would be close to Pitkin community.
Quartz Creek Campground is 3 miles past Pitkin on CR 765.