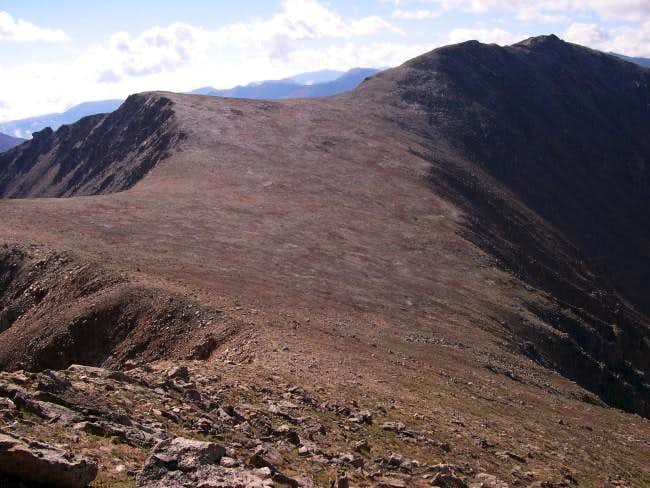 Surrounded by steep and rugged slopes; with broad, gentle ridges extending out from its 13,823-ft summit, Colorado's 95th highest peak “Lackawanna Peak” mirrors its neighboring terrain to a tee. Located deep in the heart of Colorado’s great central Sawatch Range, this relatively unknown mountain should be famous for one quality; it’s summit view. I can’t imagine a better place to view three of the five highest fourteeners in Colorado. In addition to the spectacular views of Mount Elbert, Mount Massive and La Plata Peak, “Lackawanna Peak” provides unabated views of several other notable mountains like Casco Peak, Frasco Benchmark, French Mountain, Mount Oklahoma, and Grizzly Peak. All of these mentioned peaks are within a 7 mile radius of this fine mountain. Including “Lackawanna Peak,” all nine of these Sawatch Centennials (Colorado’s highest 100) reside within a 14-mile vicinity of one another, making this sector of Sawatch Range one of the highest concentrated areas of mountains over 13,800-ft in the Continental lower 48.

As Colorado 82 meanders its way west to the highest paved pass in the nation, Independence Pass; it first weaves its way under “Lackawanna Peak’s” steep, south and west faces. Because of the neighboring paved road, this mountain supports a variety of short and interesting routes. These hiking routes can and should be combined to make interesting “loop” routes. In particular, an ascent up the Northwest Ridge and a decent into Lackawanna Gulch makes for a perfect tour of the mountain.

During my visit to Lackawanna Gulch, I was really impressed with this heavenly little basin. Today, I can still visualize a perfect unspoiled alpine landscape with wide open tundra, and a pristine, crystal clear tarns. These fond memories make Lackawanna Gulch a favorite of mine; and an area that I would highly recommend visiting. 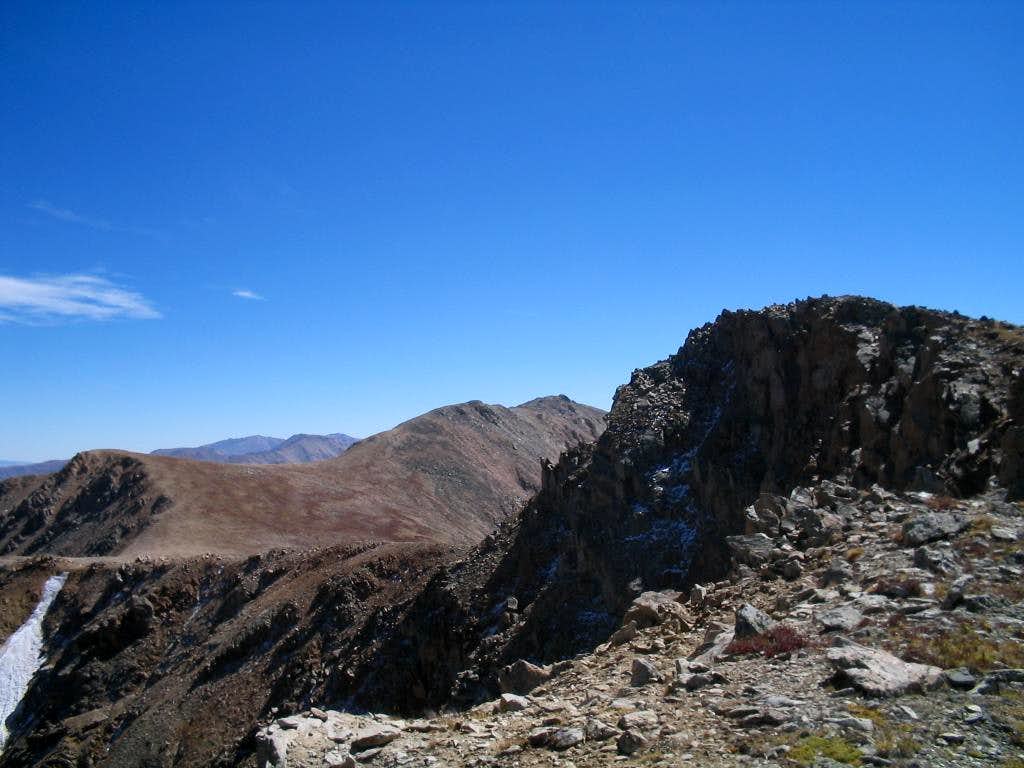 Connected to "Lackawanna Peak" is another unnamed summit, PT 13,660B. This peak is an unofficial summit with only 280' of vertical rise from the connecting saddle with "Lackawanna". If it was ranked, it would qualify as one of Colorado's Bi-Centennial (Highest 200) peaks. It currently sits as a "soft" rank between 168 and 169.

The term "soft rank" is applied to summits of this nature because there is no elevation of the summit or of the saddle between the two peaks indicated on USGS topographical maps. Both the summit elevation (13,660') and saddle elevation (13,380') are interpolated based on the nearest contour. The rise between the two could be 300', it could be 260', but without an accurate survey it is unknown. Thus this lonely peaks sits unranked in the shadow of its bigger neighbor.

The summit of PT 13,660B is located just under one mile to the northwest of "Lackawanna". When climbing "Lackawanna" via the Northwest Ridge route people often make a stop on PT 13,660B's rugged summit block en route to its taller neighbor.

This is the view most people see of PT 13,660B as they reach the crest of the Northwest Ridge route on "Lackawanna": 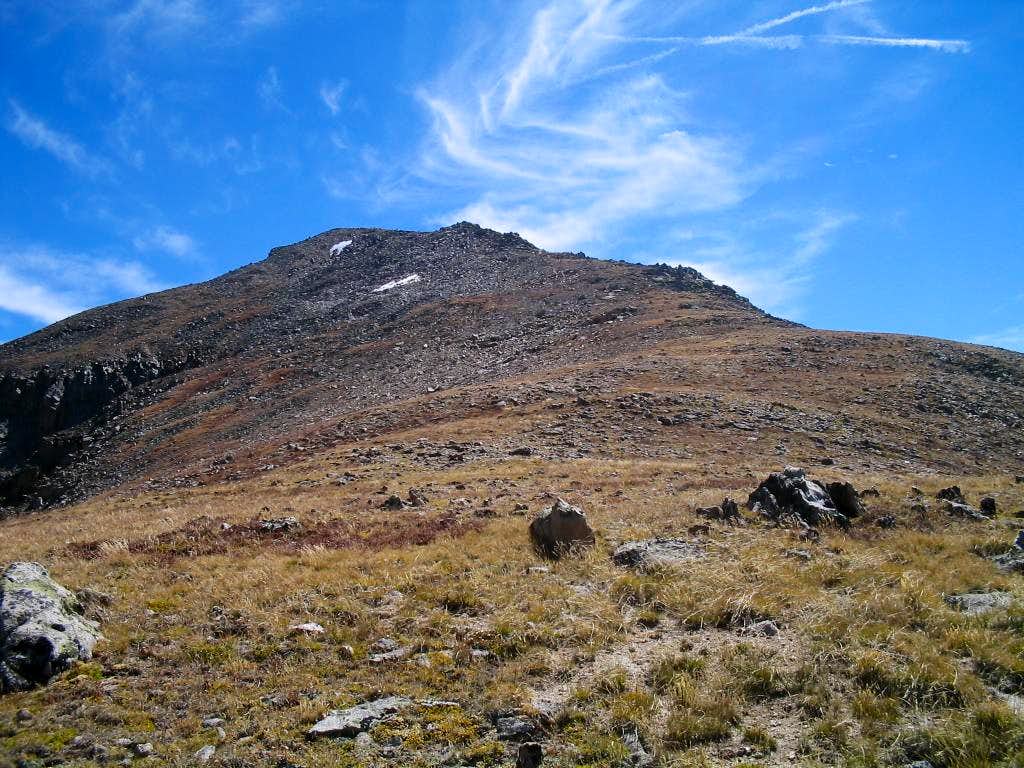 This trailhead is at 10,780-ft and provides access to Mount Champion, Casco Peak, Frasco Benchmark, French Mountain and “Lackawanna Peak.” This would also be the starting spot for an intriguing unnamed, pyramid shaped summit just northwest of Frasco Benchmark that had my attention for much of my day.

From the junction of Colorado 82 and Hwy 24, go 19 miles west to a major switchback in the road. From here there is a parking area on the right, close to the North Fork of Lake Creek. This trailhead is only 4.2 miles north of the Lake Creek Trailhead, which is the starting point for the standard route of the popular fourteener La Plata Peak. The
winter road closure is about 2.2 miles south of this trailhead.

The neighboring area to the north enters the Mt Massive Wilderness, however, "Lackawanna Peak" is not within the wilderness boundary. There is a kiosk for the self-permitting system employed at many Colorado wilderness areas. I filled one out for good measure anyway, but they are not necessary to climb "Lackawanna Peak".

Important! From the parking lot, you must cross Lake Creek to begin your approach to Lackawanna’s standard route. Through June, the North Fork of Lake Creek might be impassable due to heavy spring run-off; a 4wd ford might be your option, or else backtrack down CO 82 to below where the road crosses the creek.

Camping in the Twin Lakes area is plentiful. Considering the popularity of the area I will assume that an early arrival time to the campgrounds directly off of hwy 82 would be a good idea, especially on the weekends. You can actually car camp at the Willis Gulch TH if that’s your thing. The Parry Peak Campground is only another mile or two west on 82, I believe it is now up to $14.00 a night, however. Go another 2 miles west on hwy 82 to the Lake Fork TH for the standard approach of La Plata Peak and turn left on FR391 and go about 1 mile south on the semi rough dirt road and there is some camping there as well, no charge. Make sure to avoid camping on the private property in the area. There are a few places to stay in the tiny town of Twin Lakes, a bed and breakfast and some nice cabins seem to be the ones that I remember.

There are plenty of available campgrounds off of U.S. 24. There are some campgrounds on the west side of CO 82 if you are approaching from Aspen as well.

Independence Pass is closed annually during the winter months. Typically the closure runs late October/early November to Memorial Day. The road is closed approximately 2.2 miles below the North Lake Creek Trailhead. Current status on Independence Pass can be found at CDOT's website.

The Mount Massive Wilderness area to the north requires self-service backcountry permits, however, "Lackawanna Peak" does not reside within the wilderness. I filled one out anyway for good measure.

Typically it is best to climb "Lackawanna Peak" when Colorado 82 is open to the trailhead, meaning late spring to mid-fall. Climbing in spring be prepared for high runoff which can make the crossing of Lake Creek difficult if not impossable on foot. It is possible to back track along CO 82 to where the road crosses the creek and climb from there. In summer be aware of Colorado's famous afternoon thunderstorms, especially when on the ridge from unnamed PT 13660 to the true summit as you will be exposed to the elements.

Winter climbs are possible on the south and southeast side of the mountain but the slopes are steep and could be prone to avalanche. Take the necessary precautions and gear, and know how to use it. Climbing via the standard route in winter adds over 2 miles each way due to winter closures on CO 82.