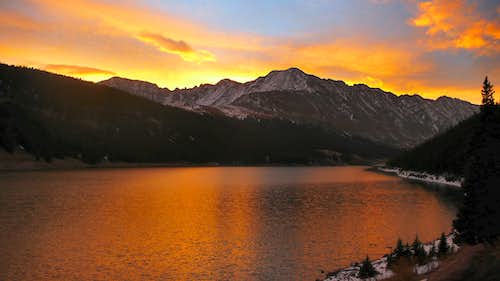 The Tenmile-Mosquito Range consists of two linear sub-ranges that run north south, starting just west of Dillon Reservoir. The Tenmile Range's northern spur is the town of Frisco located on I-70 and runs south 12 miles to Hoosier Pass. The popular ski town of Breckenridge resides in this area. The Mosquito Range's northern spur begins at Hoosier Pass and continues south to Trout Creek Pass on U.S.285.

The Mosquito Range is home for some of Colorado's most popular 14,000 ft. peaks such as Quandary, Lincoln, Democrat, and Bross. Considering the proximity to the metro area (Denver is about 1.5 hrs. away) the Tenmile Range is sometimes overlooked in favor of the modest forteeners just south of Hoosier Pass. Although plenty of high altitude mining has left an obvious scar, the flip side is all the old roads and climber's trails left behind for all of us to enjoy.

Resting quietly in Colorado's Tenmile Range, five centennial thirteeners (13,800+) rise in sequence forming the Crystal, Pacific, and Fletcher Massif. These peaks are obvious when viewing east from Hwy 91 on your way to Freemont Pass. For the casual mountaineer these peaks offer endless Class 2/2+ hiking and plenty of route variation.

Anchoring the southwest spur of this collection of mountains is "Drift Peak" (13,900 ft.). If you have driven Hwy 91, you have viewed Drift Peak; you can’t miss it towering above Clinton Reservoir. Although not an officially named peak, Drift Peak is a real mountain with a steep, short, semi-loose standard route. For years there has some confusion concerning the connecting ridge between Fletcher Mountain (13,951 ft.) and Drift Peak. Does it drop 300 ft. from either summit? Drift Peak is more like a sub-summit of its more popular neighbor, Fletcher Mountain. Gerry Roach says there is a spot where the ridge drops around 318 feet below the two summits. Other intepolations of the contours indicate the drop to be more like 280'. For whatever reason, the USGS Quadrangle does not list Drift Peak or its elevation. Seeing as the true elevation of the summit and also the connecting saddle on the ridge to Fletcher Mountain are considered unknown, the peak receives a "soft" rank between the 71st and 72nd highest peaks in Colorado.

SP member MountainHikerCO recently went up as part of a survey team to measure the drop. Their team used a prism to calculate the difference between the summit and the saddle and came up with 275'. You can read about their trip in the summit log area of this page. Based on their findings it is highly unlikely that "Drift Peak" is a ranked summit, but it still remains a worthy outing. 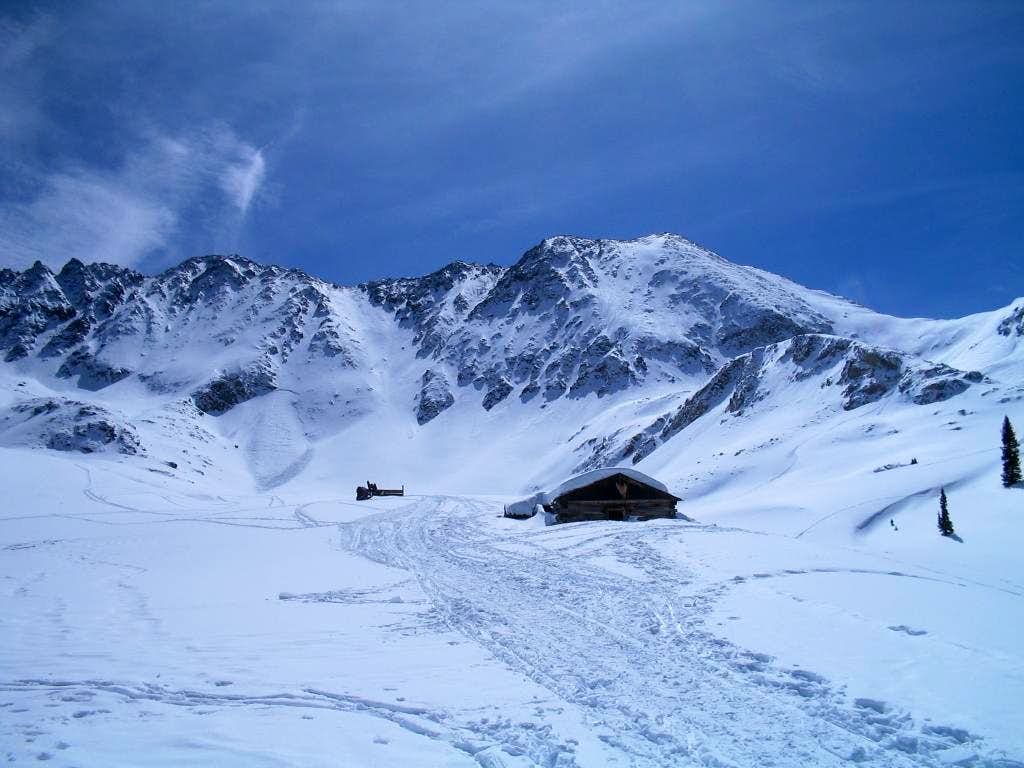 The Mayflower Gulch trailhead is at 10,980 feet and provides access to the west sides of Pacific, Crystal Peak and Drift Peak. The trailhead is on Colorado 91 and can be approached from either the north or the south. From the north, go 6.1 mile south on 91 from the junction of Interstate 70 and 91 to a large un-signed pull-off on the left. Approaching from the south, go 4.1 miles north on 91 from the summit of Freemont Pass and turn right into the parking area. There is plenty of parking here and it is maintained in winter. 4WD vehicles can continue approximately 2 miles up Mayflower Gulch to the Boston Mine.

Please note that this trailhead is one drainage NORTH of Clinton Reservoir. 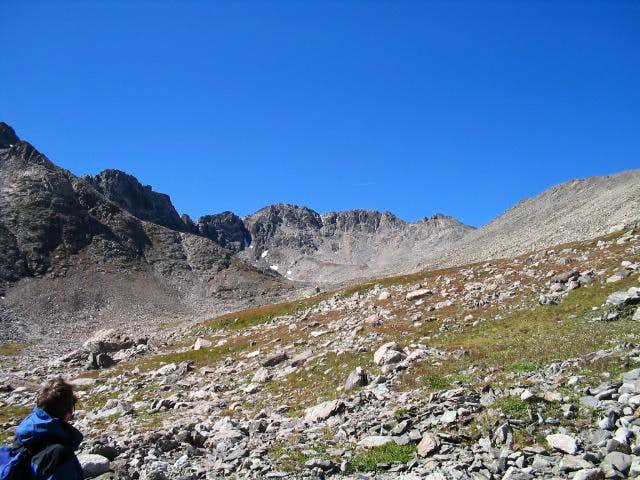 Access to Drift is also provided from the Blue Lakes Dam at 11,700' on the east side of the peak. Follow Colorado 9 south from I-70 through Breckenridge. Approximately 8 miles south of Breckenridge turn onto Blue Lakes Road (Summit County 850), this also the same turn to access the standard route on Quandary. Pass the turn for Quandary (Cty 851) after about a 1/10th of a mile and continue to follow the 850 road approximately 2 miles west and park at the dam. 2WD vehicles can make it to the dam when dry. This trailhead can also be used to access Fletcher and the West Ridge of Quandary. 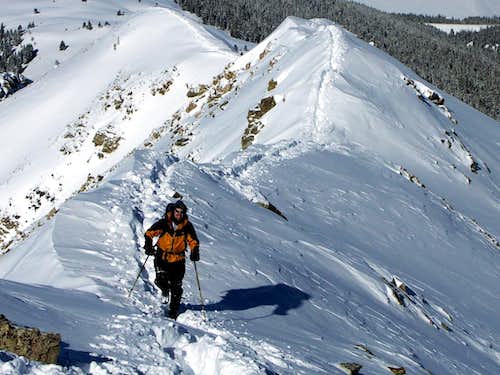 Kane describes a slight variation to the standard Villa Ridge Route. Villa Ridge was named in memory for Henry Villa who died on this steep ridge in an avalanche, December of 1990. If your looking for a short hike this is it, especially if you have a high clearance vehicle. If you’re a strong hiker you can complete this hike in 4 hrs. I will officially call this the Northwest Bowl/Villa Ridge Route. I prefer looped routes for obvious reasons, especially if they don’t add any distance to the standard route. Total distance from Mayflower Gulch is 6.8 miles and 2,930ft. Total distance and elevation gain from parking at the Boston Mine is 3.8 miles and 2,340 ft. 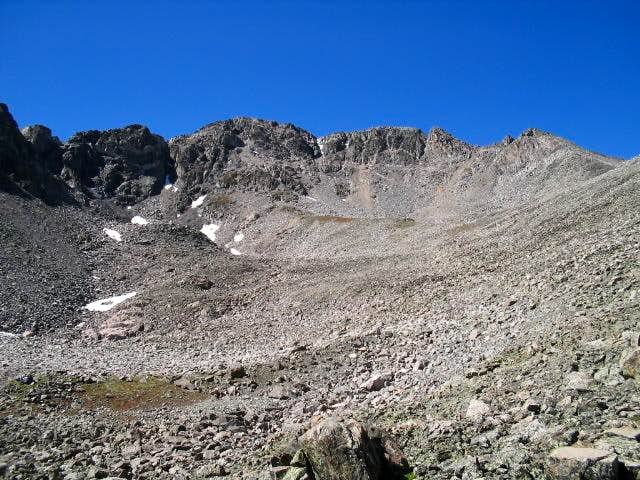 Drift can also be climbed from the east from Blue Lakes Dam. Follow the north (right) shore around the lake and enter a grass and willow filled basin. As you ascend the basin you can see Wheeler Peak on your left and Drift Peak on your right. Farther to the right you can see Fletcher over a morraine splitting the upper basin in two. From the head of this basin you can ascend a loose dirt and scree gully (class 2+) to a notch just to the right of Drift Peak's summit. A helmet is recommended for larger parties as there is the potential to kick small rocks down on each other. Round trip mileage from the dam is approximately 5 miles with 2,200' of elevation gain. 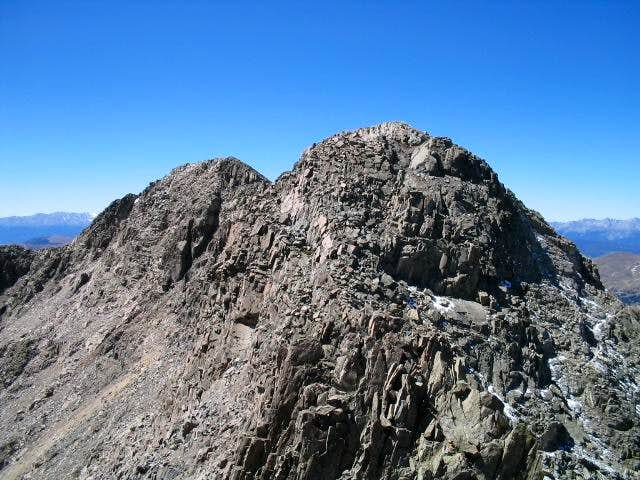 Drift offers the opporunity to be linked up with other peaks in the area via ridge traverses. The ridge traverse with Fletcher involves route finding to keep the difficulty non-technical. There may be technical variations as well for a party willing to explore. We dropped from Fletcher's summit to the saddle with Drift. At this point you have to head to the right (west) side of Drift, down climb a small class 3 step and locate a narrow gully to your left. Early season this will be snow filled. When dry it involves class 3 scrambling. From the top, traverse around the east side and top out on the summit ridge of Drift at a small false summit.

There is also a documented traverse to Wheeler Peak as well, the route has recently been added to Summitpost here: Drift Peak to Wheeler Mountain traverse. The Mayflower Gulch road is not maintained during winter. It is a popular area with backcountry skiiers and snowboarders. Particularly the area above the mine off of Villa Ridge.

Blue Lakes Dam area is also not maintained in winter.

Drift Peak is included in the Hidden Gems Wilderness campaign, if passed by Congress the surrounding areas (including Drift's summit and Villa Ridge) would be part of a new wilderness area to be designated "Tenmile Wilderness". Note, the Mayflower Gulch Road which accesses the Boston Mine would be unaffected and remain open to motorized/mechanized travel.

Drift Peak is a peak for all seasons. As with most mountains, it is generally easier to climb in summer months when the snow is gone. That of course is also prime lighting season so please plan accordingly and take all the right precautions.

For winter ascents there are areas around the peak that are prone to avalanches, keep in mind the standard route (Villa Ridge) is named after a gentleman who died on the peak in an avalanche. Know how to read the terrain, take and know how to use all the right equipment and you can safely ascend this peak in winter. The Mayflower Gulch area is beautiful in winter and popular with backcountry skiers and snowboarders. Many nordic skiiers and snowshoers also tour the road to the mine.

Map of the area. Red is Villa Ridge route, Green is the Southeast Gully route. 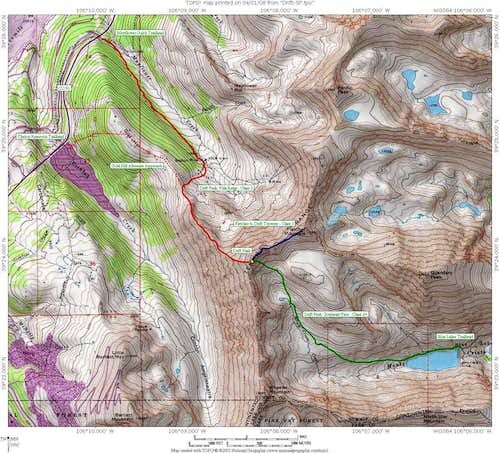