I took over on March 7, 2012, along with several other pages. This page is completely new and reformatted minus a few links towards the bottom. I hope you find the new page as informative and useful as the old one, please feel free to leave any comments you have.

Fletcher Mountain is the highest “Thirteener” in the Tenmile Range and lies along a high stretch of peaks spanning between Breckenridge and Hoosier Pass. Despite this height, the peak remains largely hidden from the east because of its higher and more well known neighbor - Quandary Peak. When driving on Colorado 91 on the west side of the peak, however, you get a good glimpse of it while passing Mayflower Gulch. 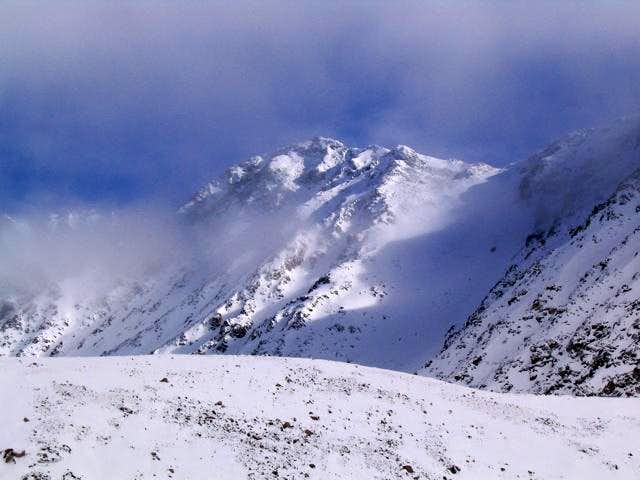 Fletcher Mountain from the southwest, photo by MtnWoman

Standing at 13,951', Fletcher just misses out on being one of Colorado’s “Fourteeners”, but as one of Colorado’s Highest Hundred peaks, otherwise known as the “Centennial Thirteeners”, its height and ease of accessibility make it a popular climb none the less. Fletcher is Colorado’s 59th highest peak and rises with 611' of prominence from Quandary Peak, 1.2 miles to the east. Fletcher is located in the Copper Mountain quadrange.

Fletcher is one of the more rugged peaks in the Tenmile Range, and lies along a long and complicated ridge that runs from Atlantic Peak to the north, over Fletcher and Drift Peak and culminating at the summit of Wheeler Mountain on the Continental Divide. The section from Atlantic to Fletcher in particular is rough and holds some rotten gendarmes. Fletcher also holds several couloirs, on its east face in particular, that provide some wonderful mountaineering opportunities. Dave Cooper’s books Colorado Scrambles and Colorado Snow Climbs feature some of Fletcher’s mountaineering challenges on their pages.

Fletcher Mountain can be reached from either Colorado State Highway 91 on the west, or Colorado State Highway 9 on the east. Both roads are paved and serve as major access roads from I-70 to points southward. From these two roads, several high trailheads can be reached that provide access to a variety of routes on Fletcher and its neighboring high peaks.

This trailhead is located near, and sometimes used as alternate access for, the popular fourteener Quandary Peak. Follow Colorado 9 south from Breckenridge for about 8 miles to the Blue Lakes Dam Road (850) and follow this road to its end at the Blue Lakes Dam, about 2.25 miles from CO 9 at 11,700'. This trailhead provides access to the south side of Fletcher, and its most popular routes.

This trailhead is also located near the trailhead for the popular fourteener, Quandary Peak. Follow Colorado 9 south from Breckenridge for about 8 miles to the Blue Lakes Dam Road (850) and then take the quick right onto Road 851, signed for access to Quandary Peak. Continue past the parking area for Quandary Peak as it curves around the east and north sides of Quandary ending at a gate at 11,080' about 2 miles past the Quandary trailhead. This trailhead provides access to the east face couloir routes.

To access the west side of Fletcher Mountain, follow Colorado 91 south of I-70 about 6 miles south of the exit, or 4 miles north of Fremont Pass. There is a large parking area at 10,980' just off the highway that is plowed in winter, and popular with all sorts of winter recreationalists. In summer higher clearance vehicles can continue along this road for a mile and a half to the old Boston Mine site at 11,560'. This trailhead provides access to Fletcher’s northwest face. 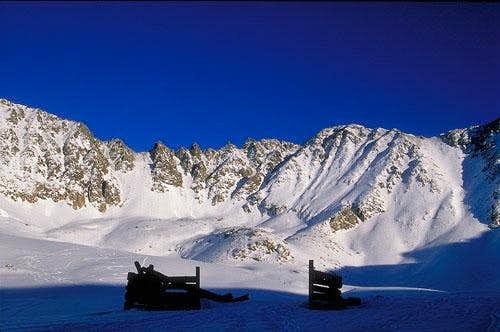 Fletcher Mountain from the Boston Mine, photo by Brent D

Fletcher host a variety of routes from gentle ridges to steep couloirs. The most popular, and easiest routes are on its south side and are accessed from the Blue Lakes trailhead.

This is typically the easiest and most popular route on Fletcher Mountain and can be climbed as a quick morning outing. Starting from the dam, hike on an old mining trail on the north side of the lake and ascend a broad valley on the southwest side of Quandary Peak to a high flat bench below Fletcher’s south face at around 13,300'. Fletcher’s summit pyramid is directly in front of you. Aim for the southeast ridge to the right skyline and follow it to the summit. Either descend this route, of the southwest ridge for a nice loop.

This ridge can also be reached from the northeast slopes in McCullough Gulch, that route is typically the descent route for the east facing couloirs described below, but can develop a cornice.

This peak can also be combined with Drift Peak, via this nifty traverse route. 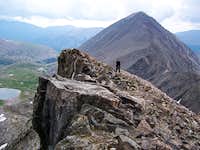 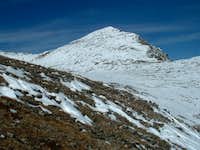 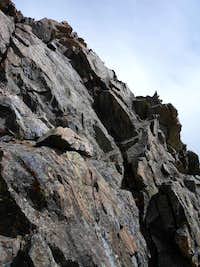 From the parking area in front of the gate, follow the road briefly looking for a trail on the left where the road take a switchback east. Follow this trail to a high lake at 11,900' on the north side of Quandary and then work your way through a series of lush benches to 12,500'. Angle southwest towards a lake at 12,555' and the base of Fletcher’s east face at lake at about 12,800'. Pick your poison, there are two main couloirs the "Y" directly below the summit, its neighbor to the left that shares a start, and a third a farther south that joins the southeast ridge, all of which are in the mid to upper 40's in pitch depending on the route chosen. Descent either involves descending from the Fletcher-Quandary saddle (which can hold a cornice) via this route, or heading off towards the ridge with Atlantic and dropping through the rugged face before the gendarmes get too difficult. This descent can involve some third class.

Follow the Mayflower Gulch road to the Boston Mine, leave it and head southeast towards the base of the very wide couloir, which descends directly from the Fletcher-Drift saddle. The route steepens at 12,000' and the couloir climbs 1600' at a maximum of 43 degrees before reaching the saddle and finishing on the southwest ridge. Descend the route, or via Drift Peak’s Villa Ridge route, which requires a tricky traverse between the two peaks.

Another options from Mayflower Gulch is the Black and Tan route. 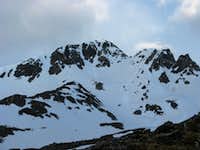 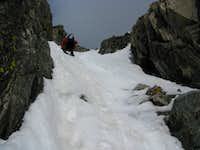 Fletcher really doesn’t have any red tape issues, the land is public and the peak is accessible from all sides, and in all seasons. It provides a great outing for people who want to get up a high peak without a lot of effort. Fletcher Mountain is within the ARAPAHO NATIONAL FOREST.

Fletcher’s easy access and high trailheads, mean it can pretty much be climbed any time you are looking for a quick outing that gets you some altititude. The peak is accessible year round, but not without precaution. In spring, snow may require the use of an ice axe and crampons - which are mandatory on any of the couloir routes. In summer, you will want to be off the summit early to avoid afternoon thunderstorms that frequent Colorado. In winter the best route is typically the southeast ridge from Blue Lakes, but this route crosses several potential avalanche slopes which drop from the southwest side of Quandary and require much caution to avoid their runouts. Take all of these notes into consideration when planning your outing to Fletcher, and don’t forget to check out some of the neighboring peaks while you are up there, they don’t combine quite as easily as with other peaks in the area, but with some routefinding skills and a little class 3, Drift and Quandary both can be climbed in combination with Fletcher.

There are lots of opportunities for camping near the peak, there are some small pullout campsites available along most of the roads, but due to the residences below Blue Lakes Dam, its best to be avoid camping in that area. You can hike in along any of the trails and find some opportunities as well, but Fletcher and its neighbors generally lend themselves to being single day outings with their high trailheads and easy access. There are numerous lodging options of variety in Breckenridge and Frisco to the north.

Check the below links for weather and avalanche conditions in the areas around Pacific Peak. 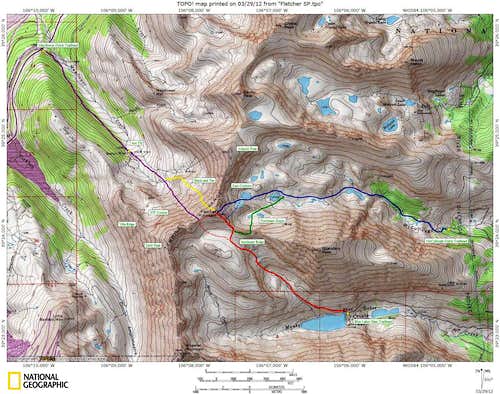 Special thanks to the original page author Aaron Johnson. Additional thanks to the book "Colorado's Thirteeners from Hikes to Climbs" by Gerry and Jennifer Roach. Statistical information is from the website Lists of John. Also, thanks to all of YOU for your great photographs, routes, and trip reports! Keep them coming!