Gęsia Szyja, perhaps the best viewpoint of all the Polish Tatras Tatras Panorama
Gęsia Szyja, the "Goose Neck", which fails to reach the 1500 limit for a story of meters, is a fantastic viewpoint standing in the Polish forehills of the Tatras.
Its name probably comes from its long thin shape, ended by rocky features, evocating a goose shape. Easy of access from the south but steep towards the Tatras, like a cape, it provides a rewarding feeling of being located on some respectable top, after having walked a short ridge covered by splendid spruce forests.

This panorama was promoted as early as 1878 by physician Tytus Chałubiński in his one of his books as the "view of 100 peaks and passes".

Gęsia Szyja is the perfect conclusion one can give to a visit of the well-known "Rusinowa Polana", the "Rusyn's pasture", a splendid clearing with beautiful pastoral huts, providing almost equally rewarding views to the whole Tatras range, usually a popular destination.

It is interesting to note that the rocks are of limestone, which attests that all the northern mountainside of the Tatras is made of a limestone rim, with the Bielanske Tatry, Giewont, Kominiarski, Osobita, being only the highest parts of it. Gęsia Szyja rocks
All trailheads are located not far from (or "on") the Morskie Oko trailhead, at the slovak border of Lysa Polana.
From Slovakia, one must follow the road all around the Tatras (via Ždiar).
From Cracow, it is reached very conveniently, much better than through Zakopane, using the shortcut of the Jurgów-Podspady border. Woloszyn ridge above forests
There are many possibilities to reach Gęsia Szyja, some of them allowing a loop.


1: From the Morskie Oko car park, just after the barrier of the park, take the blue trail right, discretly located, which leads steeply to Rusinowa Polana. The green trail continues to the top.

2: One can make a loop using a variant (on the way up or return) which consists in using the continuation of the green trail till Rówień Waksmundzka, then the red trail till Polana pod Wołoszynem, and finally the black trail reaching back the blue, at the level where it enters Rusinowa Polana. A rewarding cicuit in beautiful forests, out of the crowds.

3: Polana pod Wołoszynem can be reached by the red trail that arrives from the upper part of the Morskie Oko valley, whose junction is few hundred meters below the Mickiewicz waterfall (juntion to the 5 lakes). A good tip for the one walking down from Morskie Oko and willing to see more the rest of the day.

4: From the the Filipka valley (Dolina Filipka), which starts in the village of Zazadnia : The blue trail leads to Rusinowa Polana, and reaches the previously described itinerary (1).

5: From the Dry Valley (Dolina Suchey Wody), which starts in the village of Brzeziny : Rówień Waksmundzka can be reached via a bumpy land-rover track, whose beginning is partly (black-marked section) the track used to furbish the Murowaniec hut, and known to be a challenging moutain-biking track. One must take the junction to the red marked track on the left (looking identical, granite cobbles), to reach Rówień Waksmundzka and the itinerary previously described (2). 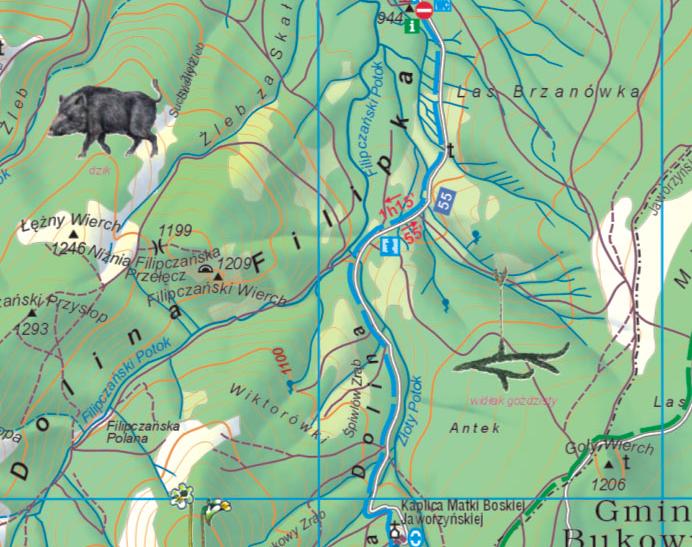 Rusinowa Polana
You are into the Tatras National Park, where offtrails, bivouacquing, camping is strictly forbidden. Don't try to enforce the law because these are areas located near other very popular ones, hence strictly controlled.

Don't try to use the wooden sherperd huts as accomodations, unless emergency used. They are classified as official historical objects and are, on the other hand, the property of the people who use them. From Gęsia Szyja, looking to Murań and the White Tatras
There is a crowd of guesthouses, hotels, pensions and accomodations of all kind as we go near Zakopane.

Wild-camping is, as previously mentionned, forbidden. However, one can use :
- One of the official campsites in Zakopane
- The climbers bivouac area, officially reserved to UIAA club members (such as PZA, British Alpine Club, Club Alpin, etc), but where you may be tolerated as a stranger, open only in summer, and located in the valley Dolina Suchej Wody, a bit higher than the described junction with the red trail (itinerary 5).

There are no nearby mountain-huts. The closest ones are Morskie Oko and Murowaniec, but significantly distant from these routes.

Eric, Accidentally you positioned this summit to a wrong place: onto the hill "Goly Wierch"... Cheers, Szani