Prostredny Hrot at sunrise
One of the most honourable, beatiful, prominent and at the same time one of the hardest to climb of High Tatra peaks . What characterizes the massif is its unusually complicated structure even for Tatra conditions . It is really an ocean of haughty crags, with huge vertical spaces of pure granite rock, walls offering absolutely wonderful climbing possibilities, couloirs and gutters of every level of difficulty and so on ... The name of the peak comes from the fact that the peak lies between two branches of one huge valley system, in the very "middle" (prostredny = middle) . Viewing from practically all directions Prostredny Hrot presents itself equally impressive, just all of its faces are so beatiful that it is simply too subjective to rate which one is the most impressive ! No marked routes in the whole massif makes the area a real wilderness and sanctuary of mountain nature . First ascent : 11.VIII.1876 - Paul Schwartz, Odon Tery and guides Samuel Horvay and Johann Still First winter ascent : 2.IV.1904 - Karoly Jordan, J.Lackner, Jozsef Szelke and guides Johann Breuer and Paul Spitzkopf senior 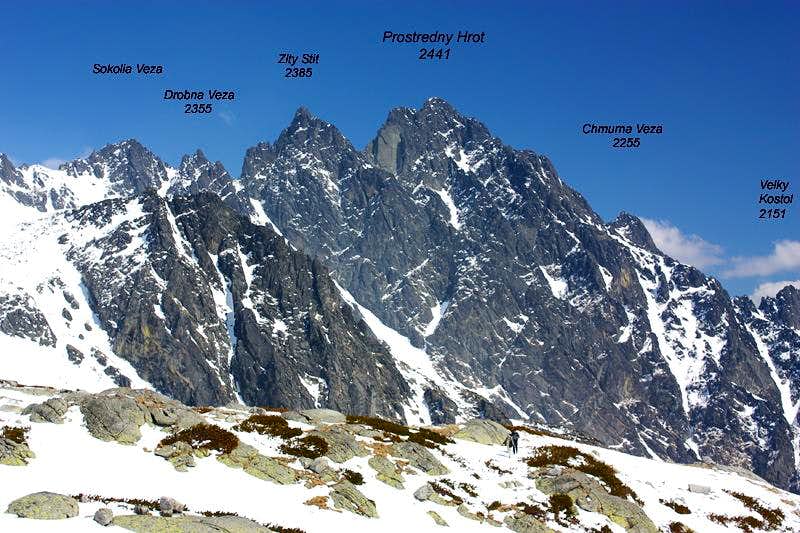 Prostredny Hrot above Velka Studena Valley Prostredny Hrot - one of the most beatifully shaped among High Tatra peaks rises proudly between Mala Studena
and Velka Studena valleys as the highest culmination in a long, lateral, SE ridge outgoing in nearby Siroka Veza from the main Tatra chain. The peak has got two prominent summits :