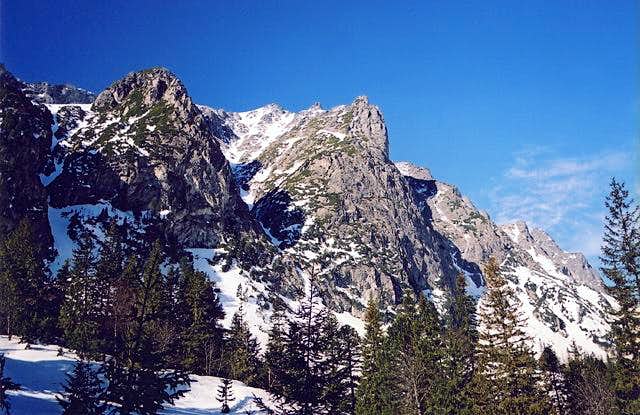 Dominating over Stary Smokovec – powerful Slavkovsky stays the most characteristic element of the town image when looking from anywhere in the south.

Among highest Tatra peaks Slavkovsky Stit is one of the most prominent and first ascended – in 17th century.

Slavkovsky Peak is very easily accessible from the south what explains its great popularity among tourists in the summer season.

The most interesting area for alpine climbers (called in Poland “taterniks” ,in Slovakia “horolezecs”) is Slavkovsky’s north-eastern face (especially in winter).

Tremendous panorama from the summit.

The name of the peak comes from village of Velky Slavkov near Poprad town. 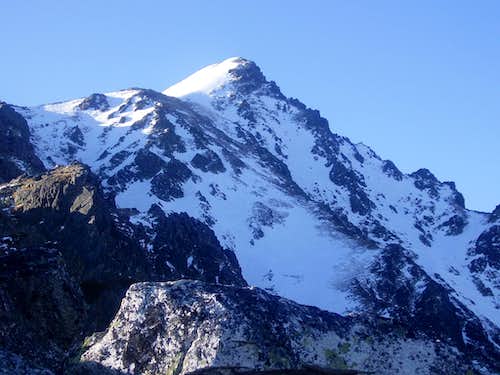 Slavkovsky Stit is a prominent culmination of the lateral High Tatra ridge which branches off to the south-east in the peak of Vychodna Vysoka(2428)in the main ridge. It is separated from long Bradavica(2476) group by Slavkovske Sedlo Pass(ca.2295).
Towards east Slavkovsky sends long falling ridge (Strbavy Hreben) with characteristic culmination of Kralovsky Nos(2283) ending under Hrebienok(1285).
There is also quite prominent southern rib going from the summit to Senna Prehyba Pass and Senna Kopa(1848) . Simple structure of the southern parts of the massif id a total opposition to the north and west where to the Velka Studena Valley – Slavkovsky sends a huge, neverending labyrinth of prominent crags, couloirs and pillars and great Jama(Jamina) gorge narrowing in the lower section into Jama Couloir falling between Grosz’s Pillar and Slavkovska Vezicka by huge scree fields to the bottom of Velka Studena Valley.

If You think about climbing Slavkovsky You have to get to Stary Smokovec beautiful spa ,ski and mountain tourism centre on Slovakian side of Tatra Mountains (currently seriously demolished after hurricane "kalamita" from November 2004.)
You can get there easily by bus or electric train from town of Poprad.
Poprad has very good communication links with whole Slovakia ,there is also an airport (probably the highest situated one in Europe - 710 meters above the sea level).

The route is free from any technical difficulties but really tiring and arduous especially in the sun what is recompensed by wonderfully wide views.

It is Tatra National Park (TANAP) area, there are no entry fees but you can hike using only marked trails. Strict rules of wildlife conservation.

Between 1.11 and 15.06 year by year all marked routes in TANAP are being closed besides routes leading to chalets in the mountains.

Alpine climbing in the area can be practiced in compliance with National Park rules.

In winter ridge route makes the ascent quite safe but as all winter escapades it is a serious tourist undertaking,
don't forget to check avalanche forecast first! 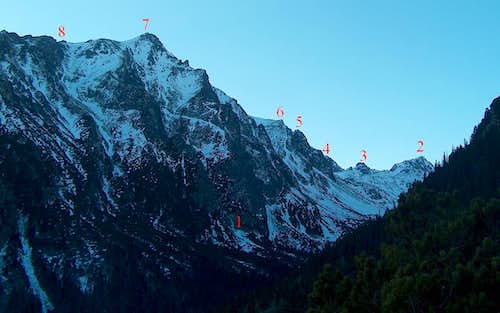 Lots of places to stay overnight in Stary Smokovec and nearby villages from attractive private houses to stylish pensions and luxury hotels.

Camping in Tatra National Park is strictly forbidden (besides some special camping fields for climbers, none of them is situated in the area of Slavkovsky Peak).

Severe and extremely changeable high mountain climate …be always prepared for sudden weather breakdowns! Stay always respectful to the mountains! Stupid mistake of disrespect can be your last one ;-)

There is one old legend that comes from 17th century Levoca’s Kasper Hain’s chronicle saying that there was a strong earthquake in Tatra Mountians on 6th August 1662 which caused enormous rock falls and distastrous stone avalanches.

According to this message during the earthquake Slavkovsky lost 300 meters of its height (so it must have been the highest Tatra peak before that) when its stale summit dome collapsed down with an enormous roar and giving light seen supposedly by monks of Piarist monastery in Podolinec (25 kilometers east from Tatras).

Contemporary opinions about these revelations of Levoca’s notes are rather strongly doubtful. Researchers and historians claim that it’s not documented and proved enough and there are no clear traces of the catastrophic event.

According to majority of researches it was not an earthquake but an extreme thunderstorm which suddenly caused dramatic flood. The height of Slavkovsky Stit didn’t change ,there was only a big crag fall on its western slopes causing huge rocky avalanche.

In memory of Krzysztof "KRZYS" Konczakowski

Very sad news to share with all of You from Poland, from Tatra mountains...
Summitpost community lost its another great member.
Krzysztof "KRZYS" Konczakowski got killed while winter climbing on Mount Slavkovsky Stit eastern face on the last day of 2014.
Mountain climbing passion filled his young and beautiful life. He was only 21.
Rest in Peace our Friend. See you on heavenly ridges...
KRZYS on Summitpost 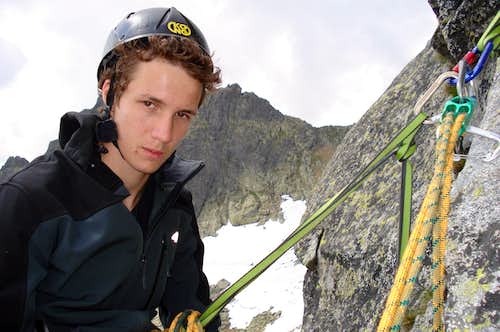 When I was there mid-July in 2005 the blue route from Stary Smokovec was still closed because of last year's storm. You'll have to take the green to Hrebienok then the red to the point where blue is accessible. This adds only 15 minutes each way to the climb.

does not cover all the Tatras trails.
For Slavkovsky stit there is one official exception: in time of not being covered by snow it is legal to summit Slavkovsky by trail from Slavskovska vyhliadka (the same rule is applied to ascending Ostrva - Osterwa from both sides - from Popradske pleso and from Sliezsky dom). One can see - it is a very vague formulation - to differ properly, when it is uncovered by snow and when it is covered by snow. It is usually understood, that in times of trail not being completely covered by snow, you are allowed to go. But it is also popular summit for winter (ski)alpinist ascenders. It's mess in rules and practical obedience to them, but it is useful to know about this legal exception. Compare with this official link (only in Slovak): http://www.tanap.org/download/navstevny-poriadok.doc

BTW I heard some park official talking about allowing mountaineers to ascend some mountains also in winter:) Let's hope this to come true, but let's be neat to the nature we admire!