Litvorovy Stit, Litworowy Szczyt, Litvorovy-csucs, Litvorovyspitze 2423 In shadow of the highest in Tatras, extensive Gerlach massif Litvorovy Stit is a rocky culmination presenting its most impressive face when viewed from West, rising high proudly above the highest floors of Bielovodska valley. Litvorovy Stit in last sunset lights
The peak located in the main Tatra ridge between Lucivnianska Veza crag(south) and Velicky Stit peak(north) is often considered with all the rocky objects in the massive ridge arc falling from Zadny Gerlach peak to Polsky Hreben pass
as just a part of the whole Gerlach massif. Litvorovy Stit is not accessible by any marked routes and though quite easily climable via neighbouring, both side accessible Litvorove Sedlo pass is not often treated as the main hiking target, rarely visited by mountain trekkers, rather more often by climbers undertaking ambitous climbing challenge of “Martinovka” ridge climbing route leading from Polsky Hreben towards Gerlach peak. Interesting panoramic viewpoint and ski touring area. The name of the peak comes directly from the valley of Litvorova Dolina spreading below to the West.
The origin of word “Litvor” lays in the name of famous mountain plant of Angelica archangelica commonly used by local people due to its qualities in folk medicine and to produce aromatic tinctures. The peak used to be named in history as Wagnerspitze and Wagner-csucs to commemorate Wilhelm Wagner, 19th century activist of silesian section of MKE(Hungarian Carpathian Companionship), but beside August Otto guide books and then it was no longer in use in Tatra literature.

Litvorovy Stit is located in the main Tatra ridge line (not more than 2 kilometers north west from Gerlach’s main summit),
in the ridge falling from the highest culmination of the main ridge of whole range – Zadny Gerlach peak(2634) to the North.
In the ridge the peak neighbours south with Lucivnianska Veza crag(2492)(via Litvorove Sedlo pass(2385) and north with Velicky Stit peak(2318)(via Velicke Sedlo pass), not mentioning here less prominent rocky culmination of "Litworowy Zwornik" directly north to the main summit, sending short lateral ridge of Litvorove Mnichy to the West, separating Litvorova and Kacacia valleys. Litvorovy Stit peak rises above Velicka valley in the south-east and two highest floors of Bielovodska valley system, that are: Litvorova valley to north-west and highest terraces of Kacacia valley. You can visit the area both from Slovak and Polish side of the mountains. The key thing when planning a stay in Slovak High Tatra is to get to Poprad - major city in the area with international airport and very good communication links with the rest of the country, from there you should get a bus or train to one of nearby
High Tatra resorts : Stary Smokovec or Strbske Pleso for example. You can find accomodation anywhere in the area, thanks to an electric train line you will find yourself everywhere You want at the right time ! Slovak bus and train connection search On Polish side as always one must get to Zakopane first, very well developed communication with the whole Poland, especially nearby Cracow City (100 km) with international airport. PKS Cracow – Zakopane bus departures PKP - Polish Railways connection search PKS Zakopane - buses Planning to visit Litvorovy Stit peak area from northern side you should take one of many buses or minibuses going in the direction to Palenica Bialczanska("Morskie Oko") and get off one stop before the final one at Lysa Polana - former Polish/Slovak road bordercrossing point(no border control nowadays). A few steps from there, behind the bridge on Bialka river blue marked trail to Belovodska Valley starts its run. Numerous bus connections from Lysa Polana to Poprad, Stary Smokovec and Zakopane. There are no marked trails to Litvorovy Stit summit, the nearest marked tourist route, the green one goes along Velicka valley leading from Tatranska Polianka village, passing Velicke Pleso lake with Sliezsky Dom hotel upon it and reaching Polsky Hreben pass. After crossing the pass below at Zmrznute Pleso lake it turns blue and descends via Litvorova valley further down along the whole length of Bielovodska valley to Lysa Polana at Polish/Slovak border. Beside climbing the peak while going by the ridge from the north(UIAA II) along famous Martin’s Route(check great Jck’s SP page for complete description), Litvorovy Stit can be reached by mountain hikers via rocky saddle of Litvorove Sedlo pass(2385) that is accessible both from Velicka and the highest floor of Kacacia valley. Due to high orientation and technical demands of ascent to Kacacia valley highest terraces and loose rock and steep snows remaining often till late summertime in long and narrow couloir falling from the pass towards south-west, it is recommended to take much safer route from Velicka valley to Litvorove Sedlo pass, traversing from the marked trail below the ridge from Polsky Hreben passing Velicke Plieska small tarns or taking walk-up straight from the east above Dlhe Pleso lake via rocky terraces along foothills of Gerlach’s north face(easy walk-up). Litvorovy Stit - route schemes from Velicka valley side In safe snow conditions Litvorove Sedlo pass may be reached on skis. The most recommended way then is the one going below the ridge of Velicky Stit through Velicka Kotlina with Velicke Plieska tarns. The couloir falling towards Kacacia valley is usually seriously endangered by avalanches. Alpine climbing in the area can be practiced in compliance with National Park rules which stand that one must have alpine club membership and then may go offtrails using an ascending route of minimum UIAA III grade. 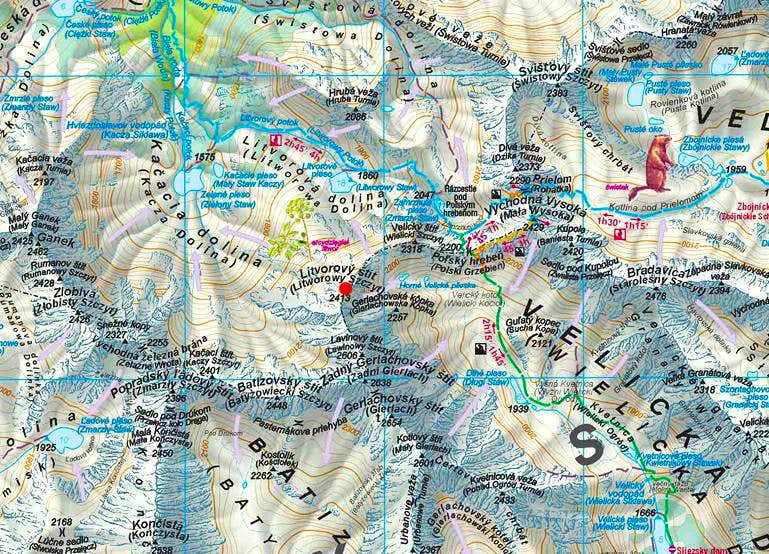 It is Tatra National Park(TANAP) area, there are no entry fees but You can hike using only marked trails. Watch out for strict rules of wildlife conservation. Stay always respectful to mountain nature ! From 1.11 to 15.06 year by year all marked routes in TANAP(the whole Slovak side of Tatras) are being closed for tourists (besides the routes leading to mountain chalets). On 21.12.2007 Slovakia along with Poland signed Schengen Agreement and accessed to "open borders" Schengen Area,
however one must remember that National Park regulations prohibiting crossing the border beside marked trails in the whole area remain in force. Lots of accomodation possibilities of different standard and price on both sides of Tatra Mountains.
I would recommend rather Slovak side when planning to visit Litvorovy Stit and the area. The nearest mountain chalets in the area are Sliezsky Dom hotel upon Velicke Pleso lake in Velicka valley
and Zbojnicka Chata in the highest part of Velka Studena valley. In summer months, there is a camping place, deep in Bielovodska valley, at Polana pod Vysokou open.
Planning to camp there, one should be a member of a mountain club and pay the fee for staying there
in the woodsman house at the entry to the valley first. Camping in Tatra National Park beside a few designated places is strictly forbidden!

According to the latest measurements the peak is much lower.