The High Tatras (Slovak: Vysoké Tatry, Polish Tatry Wysokie, German Hohe Tatra, Hungarian Magas-Tátra) is the smallest big mountain range in Europe. They are situated on the border between Slovakia and Poland, although majority of the peaks and valleys lie in Slovakia. Vysoké Tatry are located between latitudes 49-49.20, and longitudes 19.55-20.25. Main ridge starts on the west by pass Ľaliové sedlo (1952 m) and ends up on the east by pass Kopské sedlo (1756 m).

Vysoké Tatry was formed by diluvial glaciers and consists of granite, gneiss, and crystalline shale. There are not any glaciers today, just several all year long firn snow fields. The north walls are steeper in comparison with the south ones, however the higher peaks are on the south. There are about 300 peaks and spires in Vysoké Tatry and only several of them is accessible by marked tourist paths (see Allowed Peaks section).

Out of the main ridge lead a lot of extra ridges forming valleys, on step terraces many mountain lakes (tarns) can be found. The three biggest are located on the Polish side: Wielki Staw (in Dolina Pięciu Stawów Polskich - Five Polish Lakes Valley), Morskie Oko and Czarny Staw (in Dolina Rybiego Potoku - Fish Creek Valley), with an area of 34.4 ha, 34 ha and 20.5 ha, respectively. Wielki Staw is also the deepest of all: 79 m. The biggest and deepest tarn on the Slovakian side is Veľké Hincovo pleso: 18.19 ha and 53.7 m. The highest located tarn is Modré pleso (2180 m, in Malá Studená dolina, above chalet Téryho chata), followed by Vyšné Wahlenbergovo pleso (2154 m, in Furkotská dolina). SP album about High Tatra Tarns. 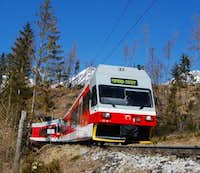 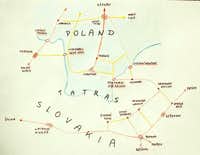 The main international airports in the broader area are: Bratislava (SK), Wien/Vienna (AT), Budapest (HU) and Praha/Prague (CZ). There are two further airports much closer, although with less connections: Poprad (SK) and Kraków/Cracow (PL).
From the airports you shall take train, bus or car to get further.

By train and bus

Slovak side: There are direct trains and buses to Poprad from all major cities of Slovakia (direct trains are also available from Budapest and Prague). Up-to-date international train search can be easily done on the DB website. From Poprad you can get to all major southern entry points (Tatranská Lomnica, Starý Smokovec, Tatranská Polianka, Štrbské pleso, Podbanské) by rail or bus. If coming by train, it is also possible to get off at the station of Štrba, which is connected with Štrbské pleso by a cog railway. The Tatra electric railway (Tatranská elektrická železnica), a separate system from the national railway that connects Poprad with Štrbské pleso through Starý Smokovec and Tatranská Polianka, is an obvious choice of public transportation along the southern side of the mountains.

Polish side: From Cracow, you shall get to Zakopane. There are a lot of buses, operated by PKS (time table) and also private companies: Frey (time table) and Szwagropol (time table). By train the road is much longer and expensive (train search: Polish Railways or DB website).

The most convenient way to plan your trip is to use a route planner like ViaMichelin or similar. There are parking opportunities on both the Slovak and the Polish side (fees will be charged). Slovak motorways are toll roads (vignettes can be bought at border crossings and petrol stations), however the ordinary highways (toll-free) are pretty good and the traffic is usually far from unbearable.

Source: Information for visitors of TANAP

Members of any of UIAA member can climb, ski, etc. in specified areas, see below. Non-UIAA members are permitted to use ONLY MARKED TOURIST TRAILS or to be accompanied by TATRA' MOUNTAIN GUIDE.

The National Park is the heritage of all mankind. Mount Kriváň (2495 m) is the national symbol of the Slovak people. Since 1993 the mountain range Tatras, together with the Polish part of the National Park, has been identified as natural, biospheric, reserve of UNESCO. Whilst enjoying your visit in the National Park, please help us to protect its natural beauty. Information notice boards about the National Park serve you, the visitor - please do not damage them.

1. In order to enjoy your visit please use marked hiking tracks, footpaths and cycling tracks as well as Tourist Information Centres.
Cycling tracks
2. Picked flowers will wither, captive butterflies will die, chicks of an eagle could fall from their nest if disturbed. Therefore touch the nature by your heart only.
3. In order to protect the nature and to ensure your safety, hiking tracks in the mountains are not accessible to public between 1 November and 15 June.
Closure of hiking paths
4. Enjoy your hiking in the daytime, between an hour after sunrise and hour before sunset.
5. Hiking away from marked tracks, under the supervision of experienced guides, is available between 16 June and 31 October.
Hiking away from the marked tracks
6. In order to protect endangered species of birds of prey, paragliding and using rogallo is permitted only in specifically designated areas.
Gliders and paragliders
7. It is not permitted to camp or bivouac anywhere in the National Park. It is prohibited to light fires anywhere in the National Park other than in designated sites in tourists villages.
8. If you are enjoying your stay in the National Park with your pet dog then the dog should always be on a lead and muzzled. In specifically designated nature reserves dogs are not permitted to enter at all.
9. Peacefulness of nature is there for you to enjoy. It should not be polluted either by lights effects or loud music, or any other noises.
10. The National Park provides also for winter sports such as alpine and cross-country skiing on designated slopes and tracks as well as mountain and rock climbing, and ski-alpinism in purposely built facilities where picnic areas are set aside for an open fire barbecues.
Alpine skiing
Cross country skiing
Ski-alpinism
Climbing and rock-climbing
11. Please do not pollute the environment. Take your rubbish home with you. To avoid fires please refrain from smoking during dry periods.
12. Protect the underground beauty of the nature. Do not try to enter inaccessible caves and gullies.


It is IMPORTANT to note that some areas are closed even to UIAA members:

Please also note that despite both Slovakia and Poland have joined the Schengen zone in December 2007, regulations have not changed in the High Tatras. The only point where border-crossing is legal in the nature conservation area is through the peak of Rysy.

Other climbing regulations are at SP page for Gerlachovský stít

Climbing is permitted only in two regions: the Orla Perć ridge, and around Morskie Oko - see this map.

Table with the highest peaks adapted by peterbud

The following table presents the highest peaks of the range. Polish, German and Hungarian toponimes are listed in italic below the official Slovak names. The geographical names of Tatra Mountains is actually very complicated (and sometimes chaotic) - not just because there are names in four languages, but also because often there are (were) different variants within one or more of the languages. Tatra toponimes have a long and intricate history. Several times an expression of one language got used in an ill-traslated form in the other language. Occasionally, names were mistakenly recorded or mixed up in some of the basic publications. And last, but not least, a handful of peaks were attempted to be renamed for different reasons (honour, politics). All this created considerable confusion (partly present on SP as well). A very good and extensive online Tatra-toponimes dictionary is available for speakers of Slovak, Polish, German and Hungarian to ease the situation.

The following image map gives an overview of the High Tatras and its current SP pages, except the newest additions: 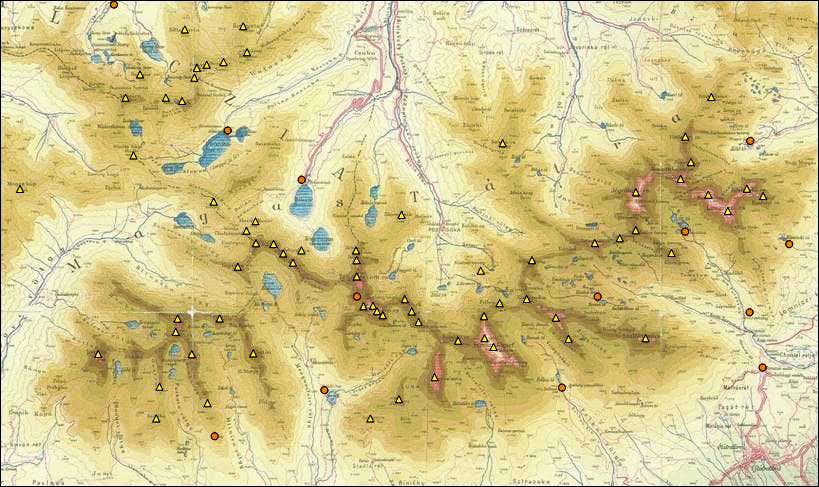 Move the mouse over the yellow triangles (peaks) and orange dots (huts) to see their names.
Click the peaks to open their SP page in a new window.
Names of peaks appear according to which country they belong to (on the border: Polish / Slovak).
Underlay image is a vintage tourist map from 1910.

View from Kriváň to the rest of the High Tatras' peaks - photo: peterbud

For non-UIAA members, only the peaks listed below are allowed to be climbed without permission (on marked tourist routes):

Hiking and climbing in Vysoké Tatry is available all over year, but there are several regulations - see the Red Tape section.

On the Slovak side camping is not permitted in the area of National Park Vysoké Tatry. Public camp is only in Tatranská Lomnica, otherwise you must sleep at Mountain Chalets or Hotels. In the touristic season the High Tatras get quite crowded, so it is highly advisable to book beds in advance.

On the Polish side there is a camping in Zakopane. If you are a member of any climbing club you can camp in 3 places in mountain, too:

Please note that these are data for villages at the feet of the mountains, they're good to get a general feeling of what's around. In the high regions the situation may be quite different.

Actual weather on the Slovak side (situation at this moment) from HZS website.

Compiled by peterbud with help from Tomáš Krištofóry and jck


The following list introduces some of the most important publications about the High Tatras (in chronological order), but it is far from complete. A more in-depth essay of the High Tatra's literature can be found here in Hungarian.

On Polish side there is a camping in Zakopane.

Practical info about climbing in Tatras

Hello I wrote text about climbing in Tatras (eng.). There you will find lots of info about mountaineering, multi-pitch climbing and some other info :) http://winterclimb.com/climbing-base/item/34-climbing-in-tatra-mountains-poland-slovakia I hope that will be helpful ;) Best regards Damian Granowski

What do you mean if you are a "member of ANY hiking club" you can tent camp? I'd like to hike in the Tatras and tent camp. I don't have an issue following the rules and camping in a designated spot; can anyone elaborate on the accessibility of these tenting areas? Can you pay at the refuges to setup a tent? I plan to visit the Polish side via Zakopane. I see you can tent in Zakopane, but I want to get into the mountains and do a multi-day hike.

I'm only familiar with the regulation on the Slovak side and that's pretty clear. As for those campsites on the Polish side, you may turn to the CE Europe tread in the forum and ask around colleagues there about what's the current regulation.