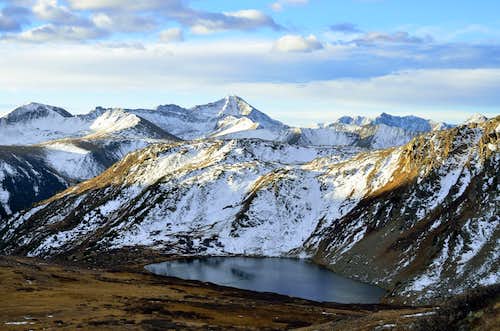 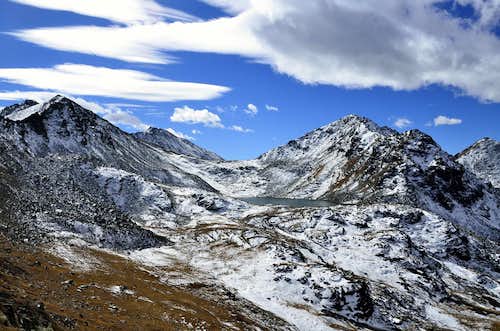 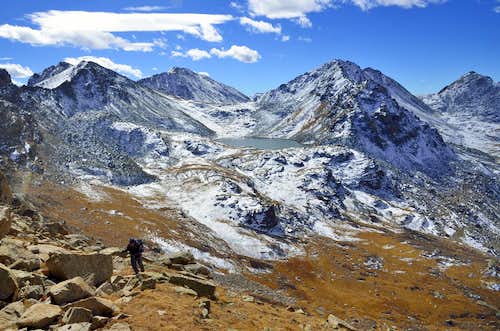 Mountain: Geissler West Mountain is part of Geissler Mountain  and together with Geissler East Mountain makes Geissler Mountain. West Geissler is lower peak than it’s partner on east side on same ridge. Both peaks Eat and West are ranked. Geissler Mountain is a Colorado 13er that most have never heard of, but it's so worthy of your admiration. The highest point within the Lost Man Loop Trail, its summit provides spectacular views of Independence Lake, Lost Man Lake, the Williams Mountains and a slew of peaks in the Independence Pass region.  These two mountains usually are climbed together as part of Geissler rimwalk, and they can be done from two different trailheads as described in Trailhead section. 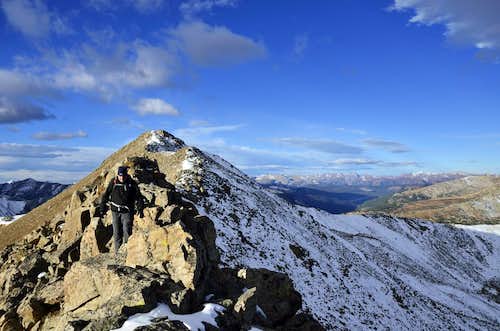 Ridge between West and East Geissler. 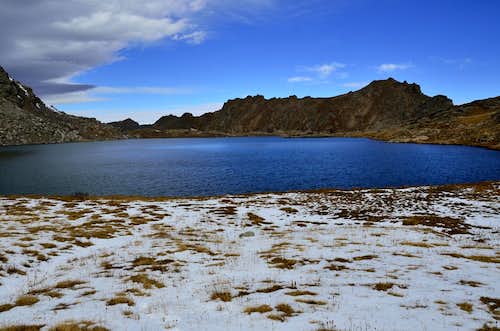 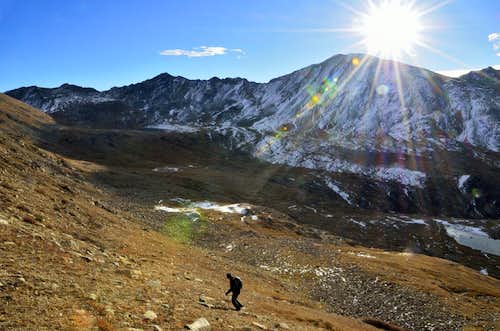 There are 2 ways to access the Lost Man Trail:

2) Lower Lost Man / Midway Pass trailhead: Drive 14 miles east of Aspen on Highway 82 to a large trailhead parking lot on the left (north) side of the road, directly across from Lost Man Campground. 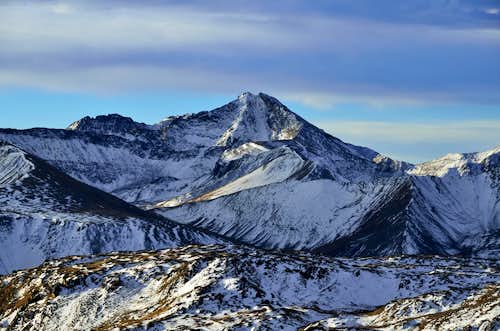 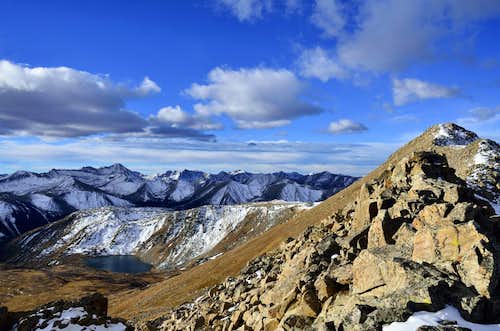 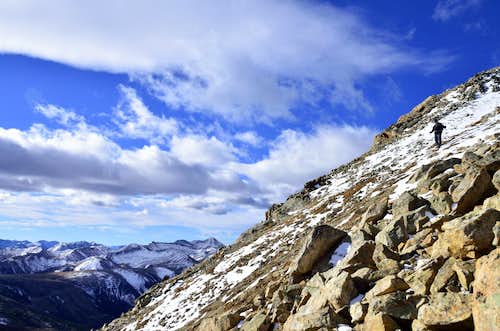 The Linkins Lake/Upper Lost Man trail head starts just below timberline to the west of where the Roaring Fork River, really just a creek at this point, drops through a culvert channeling the river beneath Highway 82 near Independence Pass (12,095-ft.). (See driving directions.)Follow the trails it ascends on moderate grades through scrub willows up the left (west) side of the Roaring Fork, passing the last few pockets of spruce trees along the way. In less than 0.2 miles come to the junction with the Linkins Lake trail heading left (northwest). Stay right. Just beyond the junction enter the Hunter-Fryingpan Wilderness.At 0.5 miles cross to the east side of the river on a log bridge. Soon you leave the last of the willows behind as the trail continues its steady ascent through emerald green meadows sprinkled with wild flowers. The Geissler Mountains rise above the basin to the northwest while Twining Peak dominates the ridge to the east.As you climb be sure to turnaround and enjoy ever improving views of Independence Mountain (12,703-ft.) and a sea of jagged ridges and summits in the Collegiate Peaks Wilderness to the south.After walking just over a mile the grade steepens as the trail curves east away from the Roaring Fork and climbs to a bench, circumventing boggy meadows around the river. Once on the bench the trail again heads north,crossing rivulets fed by snowfields from the slopes to the east.Just before arriving at the southwest end of Independence Lake the trail crosses the lake’s outlet stream. Reach the lake, set amid wildflower-filled meadows at the base of a ridge anchored to the southeast by Twining Peak, at 1.75 miles. Follow the trail as it climbs through meadows along the left (west) side of the lake and heads towards Lost Man Pass, the obvious saddle on the ridge to the north. Beyond the lake ascend rock strewn meadows on a moderately steep trail to the top of the pass (12,815-ft.) at 2.3 miles. Lost Man is a good example of why hiking to pass is so enjoyable. As you crest the ridge the view to the north unfolds all at once. Lost Man Lake lies cradled in a rocky bowl edged with talus slopes and meadows. Panoramic views extend north to the craggy peaks and ridges of the Continental Divide and Hunter-Fryingpan Wilderness. To the south, the emerald green expanse of the Roaring Fork drainage is rimmed by the Geissler Mountains and Twining Peak. Across the highway views extend south to a sea of summits in the Collegiate Peaks Wilderness.

The Lost Man trail provides instant gratification to anyone who loves traversing high alpine terrain with see forever views. Starting at 11,500-ft. off Highway 82 just below Independence Pass (12,095-ft.), the trail features some of the easiest access to an alpine wonderland of meadows and lakes anywhere in the area.The trail begins with a moderate ascent along the nascent Roaring Fork River,passing pretty Independence Lake before topping out at panoramic Lost Man Pass(12,815-ft.). Beyond the pass the trail drops to picturesque Lost Man Lake the descends through beautiful meadows with great views of the Williams Mountainsto Lost Man Reservoir and the lower trailhead on Highway 82, located 4-miles west of your starting point.The hike can be done as an out and back or, with a car shuttle, a semi-loop. Please note that walking along Highway 82 to return to your car at the upper trailhead parking area at Linkins Lake is not recommended. Highway 82 is a very narrow road with little or no shoulder. 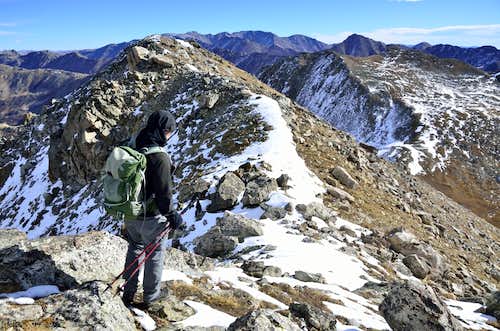 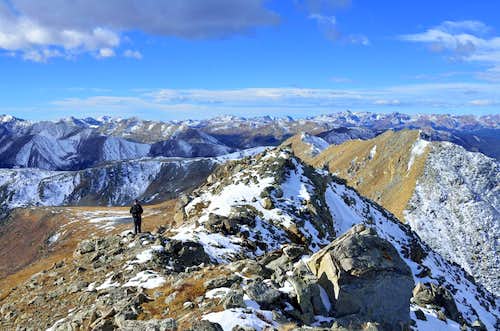 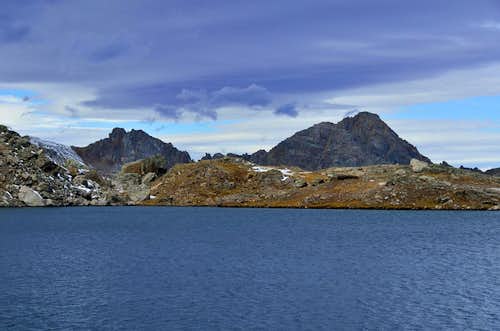 Colorado Highway 82 over Independence Pass is closed November through May (Memorial Day). The Hunter-Fryingpan Wilderness is open year round, but access to the area is difficult when Highway 82 is closed. No permits or fees are required to climb the mountain or hike Lost Man Trail. Parking at the trailheads is free.

To check the status of CO 82 Independence Pass click here
When to Climb:
Late June-July through September is when to climb if you don’t want to be on snow. Obviously, a September snowstorm would change this.

As the Highway is closed from late autumn through late spring, approach during this time would have to be creative (not to mention energy and time consuming). You are probably better off climbing something else that is more accessible.

Camping:
Camping is allowed in the Hunter-Fryingpan Wilderness. No fees are charged. Do expect the possibility of stove only regulations.

Lost Man campground is across the Highway from the lower (west) trailhead. A fee of $15 is required per night.