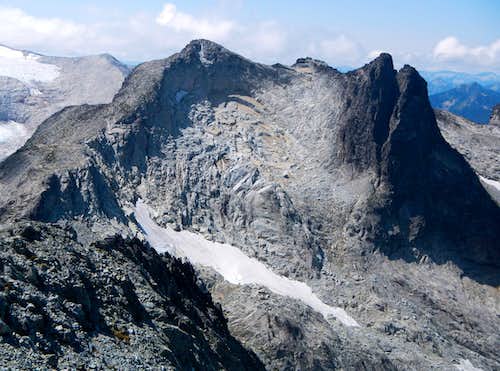 Dip Top East Face
Just north of Mount Daniel and Pea Soup Lake are two peaks of nearly equal height separated by a high col and a dying glacier. If peaks had genealogy, Dip Top and Lynch would be twins. Both peaks have long north ridges with steep west faces and gentler eastern slopes. Dip Top Peak is the higher of the two by roughly 10 feet, thus featuring over a thousand feet of prominence. 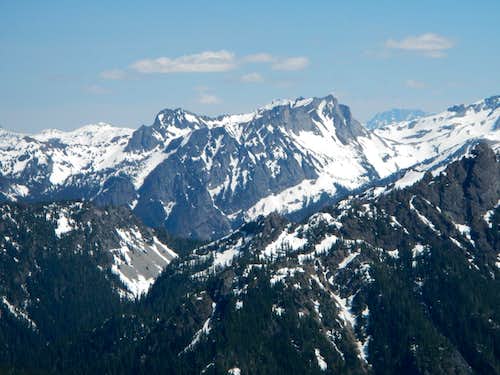 Dip Top West Face
Dip Top was first climbed by Bill Prater and Gene Prater in August of 1950.  These two brothers were the first designers of the modern snowshoe in 1970 which made use of modern materials, and included metal cleats.  They founded the Sherpa brand which gained great popularity in 1980's setting a new standard for snowshoe production.  The west slopes of Dip Top drain into the East Fork Foss River while the east slopes drain into Jade Lake.  At 7291 feet, Dip Top Peak is the 7th highest peak on the "Home Court" 100 List. 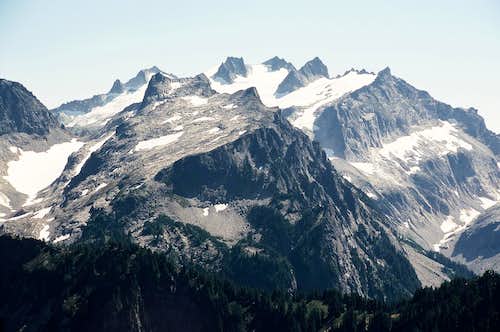 Dip Top North Face and Mount Daniel behind
Jade Lake and Marmot Lake are both popular backpacking destinations in the summer, however Dip Top and Lynch are seldom climbed. One reason for the neglect of these peaks might be distance. It's roughly 27 miles round-trip to climb both peaks via the easiest route. Also there is a glacier crossing to consider albeit a benign one. To reach the summit of Dip Top also requires some scrambling on clean granite and a short section of exposed narrow ridge. 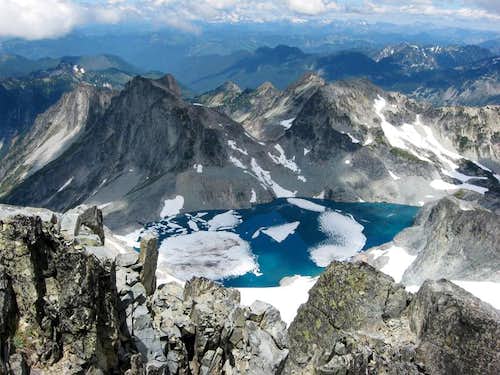 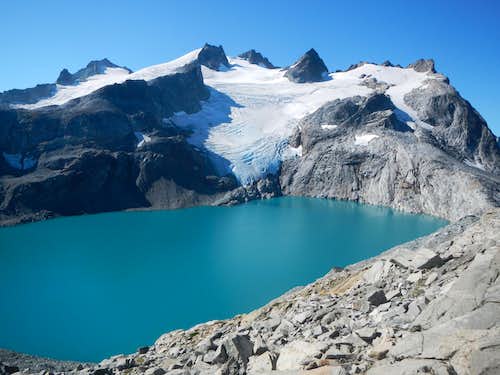 It is mention-worthy that a more difficult traverse route from Mount Daniel exists, however that route will not be described here. Perhaps someone will make a route page at some future time. 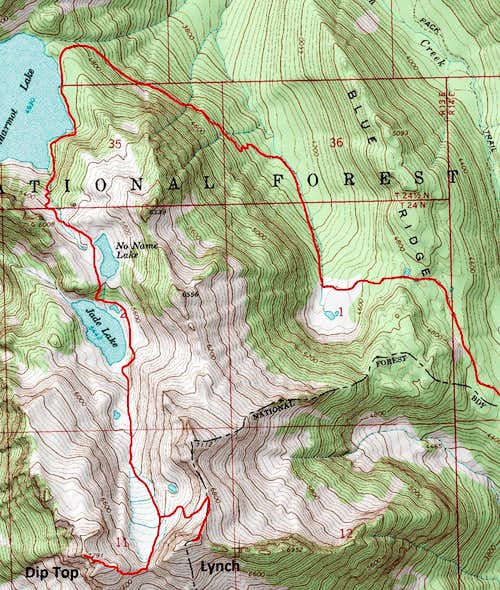 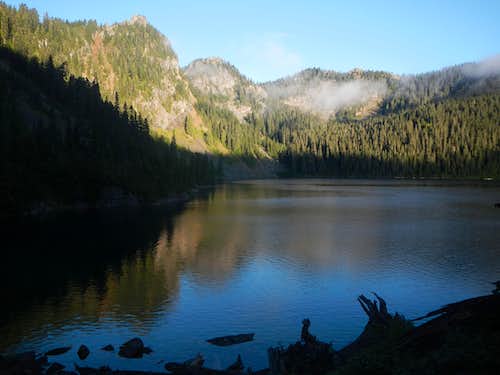 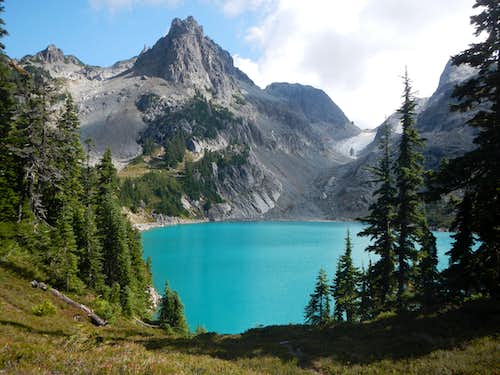 Jade Lake
From No Name Lake the trail descends slightly to Jade Lake where you can see part of Dip Top Peak as well as the small glacier. The trail continues around the east side of Jade Lake. Watch for the correct path which ascends over and around some troublesome cliff bands and then descend the steep dirt to the north shore of Jade Lake. That's it! The end of the trail. You're on your own now. 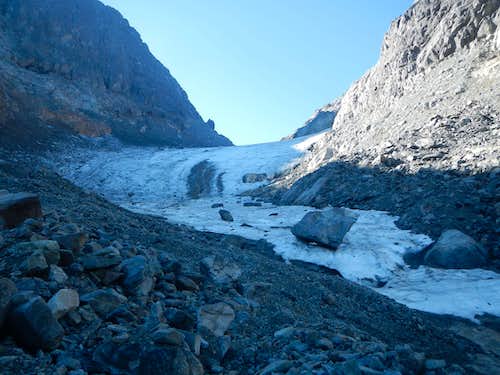 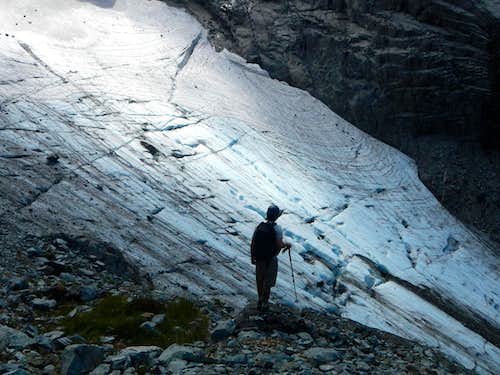 Small Crevases
From Jade Lake ascend scree and glacial silt, or snow in early season, to reach the base of the glacier. Crampons and ice axe or micro-spikes are suggested here. Stay along the eastern edge of the glacier to avoid minor crevasse danger. Once at Dip Top Gap, the scramble route for Dip Top Peak begins. Take a moment to appreciate the view of Pea Soup Lake, Mount Daniel, and the Lynch Glacier. 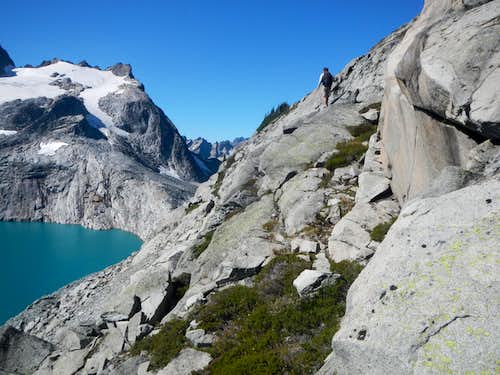 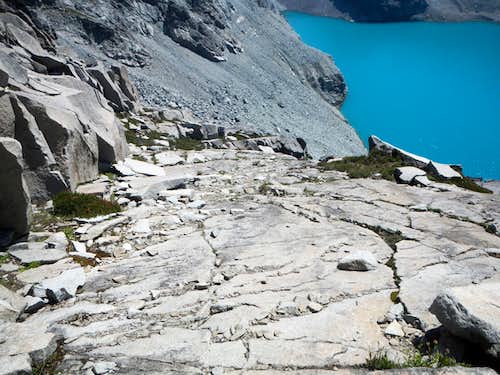 Looking Down The Exposed Slab Ramps
From the gap, traverse around to the south side of the east ridge of Dip Top Peak. Ascend some down-sloping slab ramps with a few short class 3 steps. Look for a safe and easy spot to regain the crest of the east ridge and then follow it westward to the summit. Just before the summit is a narrow exposed section. Use extra care here. 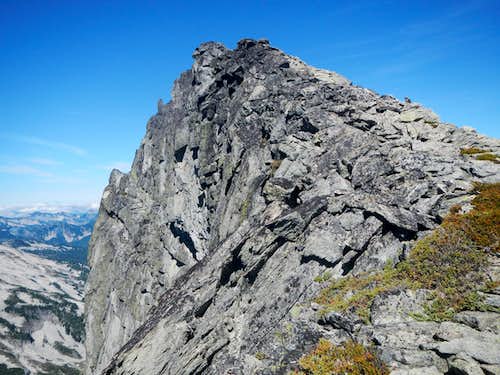 The Narrow Exposed Section of Ridge
As of August 2015, the summit registers on Dip Top and Lynch had both been removed.  Please bring a new register tube if you are planning a trip here. 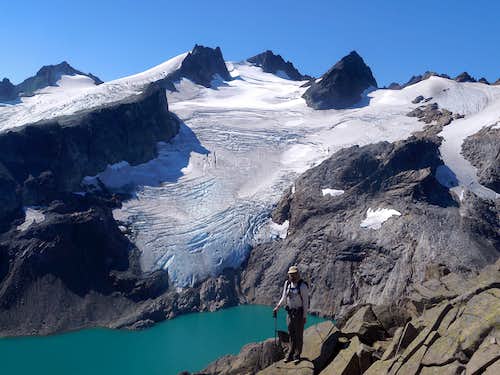 Numerous camping spots are located along the east shore of Marmot Lake and a few spots can be found at Jade Lake. Please do not camp on sensitive alpine meadows.   Display a valid Northwest Forest Pass to park at the trailhead. 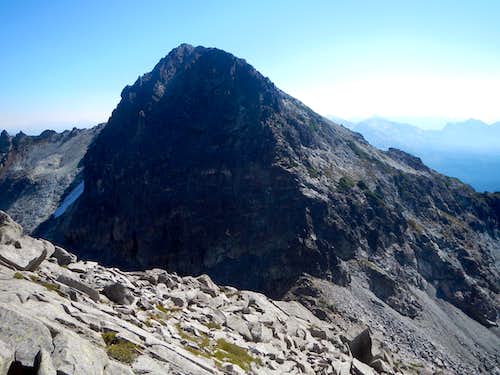