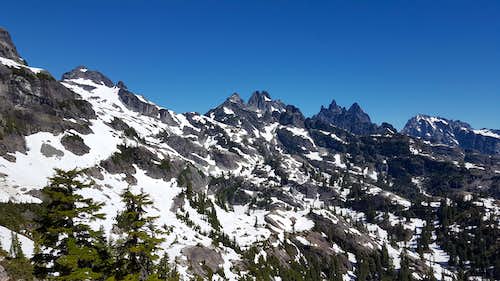 Lemah mountain
About the Climb

Lemah Mountain is one of the most distinguishable peaks of the Snoqualmie Crest peaks. Lemah means "hand" in the Chinook jargon. With its five "fingers" jutting up to an altitude of 7512 feet, Lemah can be seen from every high ridge and summit for miles around. Although seemingly dwarfed by its neighbor, Chimney Rock, both in altitude and in stature, Lemah Mountain offers a very alpine climbing experience over snow and glacier ice and easy rock to a high ridge and exposed summit. Because it is an easier climb than Chimney Rock, Lemah Mountain is a much more popular ascent. Each of the five fingers has an independent summit route, and a traverse has been done across all five summits. Summit views are spectacular, including Chimney Rock, Mount Daniel, Mount Stuart, Mount Rainier, and sweeping views of the alpine lakes, valleys and ridges on both sides of the crest.

The usual approach is via Cooper River Trail and Pete Lake just west of Lake Cle Elum. Drive Interstate 90 to exit 80 near Cle Elum, then head north 3 miles to Washington Highway 903. Turn left and follow Washington Highway 903 east through Roslyn and Ronald. Then follow north along the shore of Lake Cle Elum to the Cle Elum River Campground. Turn left on Forest Service Road 46 and follow it for 4.8 unpaved miles to Cooper Lake. Take the right fork, toward Owhi Campground and continue 1.2 miles to the road's end and the Cooper River (Pete Lake) trialhead. A Northwest Forest Pass is required of course.

Hike the Cooper River Trial (Trail 1323) for 4 relatively flat miles to Pete Lake. Continue another 1.2 miles, staying left at all forks, to meet the PCT. Take a right, heading north on the PCT for about 1 mile to Lemah Creek. Leave th etrail before crossing the footbridge and hike cross country up the creek about 1.1 miles to the trailhead of Lemah Creek valley. From here, two routes lead to the glacier. Continue up Lemah Creek via the prominent snow gully leading northwest, then angle southward across a shelf and up moraine slopes to the glacier. Or, climb the slopes directly west from the valley to the glacier.

However you get there, rope up and ascend the glacier, entering a broad basin between the southern two of Lemah's false summits (Lemah One and Two). Contour northward, traversing around the east buttress of Lemah Two, and ascend a snow slope and chute to the upper snowpatch on Lemah's east face. The chute is the crux of the climb, involving steep snow/ice or difficult rock scrambling (at least Class 3, some say Class 4). Continue up snow or easy rock to the slight notch in the summit ridge, then scramble up the ridge to the summit of the middle peak (Lemah Three).

To descend, downclimb the route. Some people reportedly rapple down the chute rather than downclimb Class 3-4 rock.

Aug 10, 2000 by Mike Collins
Lemah Mt (Main Summit)
The Alpine Lakes | Link to this report
If you have ever looked up from Spectacle Lake at Lemah and wanted to visit that peak, here is the route. From the outflow of Spectacle Lake, just at the start of the cascading Delate Creek, cross on sun-bleached logs to reach the north side of the lake. Look to a shoulder on the northwest which is about 120' above the lake level. It is this shoulder which must be crossed. Near the point where the shore and the forest meet will be the start of a faint climbers path. It takes you through the vine maple and ferns. Where it bumps into a 4 foot thick log, hop on the log and walk up it 60' where it will continue on the left. Once on the shoulder the route is close to the cliff wall on your right. There are cairns which will guide you across the boulder fields ahead. The cairns direct you down toward the stream which is easier to walk along than the boulders. About 1/2 mile up the stream you will see a three foot tall cairn on a large bedrock outcropping. When you reach that cairn you must start to do your own cross-country routefinding by angling NNW to cross the ridge and gain access to the Lemah Creek drainage. I found a great ramp at 5,800' and placed two cairns on the ridge to help me find the route on the descent. Don't go too close to the SE towers as the slopes are too steep. Once on the ridge the hard part is over. The objective of the peak is in view and gentle talus slopes to start and snowfields lie ahead. The next objective is the gap between Lemah Two and the Main Summit. The snowslope is not that steep but I thought crampons made the climb much safer at the higher places. Once at the gap you can put the ice axe and crampons on a rock as you are done with them. Ascend the east side of the crest in an easy sloping climb until reaching about 7,250 feet. It is there that you will cross over to the west (King Co) and traverse in a northerly route on a broad heather/rock slope. Almost immediately west of the summit itself is a 15 foot rcok nose. Just past this is the gentlest route up. You should never be involved with more than Class 3 difficulty. The hike was 5 hrs to Spectacle Lake and % hrs to the summit. An added bonus was the pleasant finding of marine clouds filling all the western valleys up to about 5,400' Just the mountain peaks were popping up. The clouds made fingerlike advances through the notches and passes into Eastern Washington but were burned off after several hundred feet of the hot air. The peak offers great views of Chimney Rock and Overcoat. Along the way are impressive geologic lessons on glacial activity.

'Shoulder' to Cry On

The slide area (300m) separating the outlet of Spectacle lake from the 'Shoulder' on the north side of the lake is now so overgrown that no trail can be found. The underbrush visible in recent photos is mostly 10-12ft tall slide alder on a 30degree slope, and is incredibly dense. When you are near it, you can't see over it to 'aim' for a landmark on the other side. If you plan to access Lemah Mt. from Spectacle, I suggest you bring a machete and allow an additional day for hacking a path to the Shoulder.

I didn't realize I never had them entered. Thank you!

Thanks for fixing that. Out of curiosity, have you climbed Lemah #3? I just noticed that you didn't sign the climbers log.