Kežmarský Štit is the one of the highest summit in High Tatra and the one of the easiest available Tatra’ “gigants”. Already in XVII century it was visited by tourists and it was known till three routes leading on the top! Today it is visited in great numbers, too. Especially because of a nearby distance from a marked trail and an easy access. 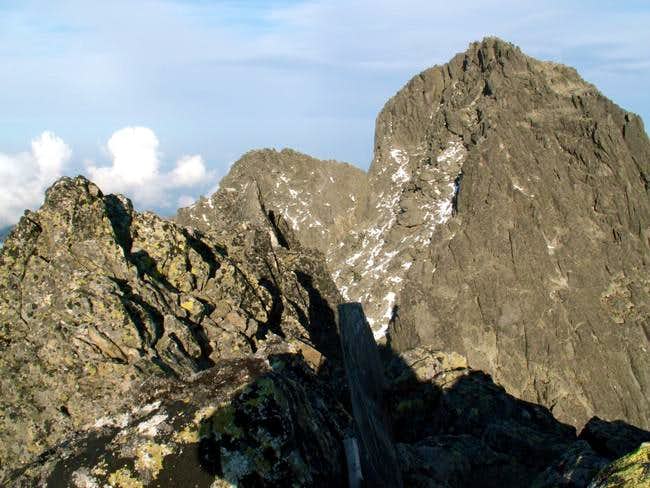 
A view from the top in the west direction is limited because of a near neighbourhood of such summits like Lomnický Štit, Pyšný Štit, Baranié Rohy, but it is the best point for panorama on a surroundings of Vel’ká Zmrzlá Valley. In the north direction you can admire whole Belanske Tatry. At the foot in the east the Spiš arranges – very interesting historical province of Slovak Republic.


The Slovak and Polish name of this summit comes from Bielej Vody Kežmarskej / Kieżmarska Valley and this from the one of Spiš’ towns, which was an owner of this area.

Kežmarský Štit was visited by tourists already in XVII century. In this time it was known till three routes leading on the top! David Frölich, a student from Kežmarok and later a fames mathematician, was the first known by name tourist which reached the summit with his two school warkmates (1615) and a guide. He described this trip in his book Medulla geographie practice in 1639 year. But probably hunters from Spiš were the first concquerors of this summit.


In 1654 year there were cans with parchment sheets on the summit to sign in tourist which reached the top. This tradition is continued till today by Horska Zachranna Sluzba which leaves notebooks on tops to sign in.


In XVIII century Kežmarský Štit was forgotten and visited seldom. Just in second half of XIX century tourist started to ascend on this summit again. But till today nearby Lomnický Štit is a big competition, especially since the day they open a cable-car leading on this top :).
In winter Guenter Dyhrenfurth and Alfred Martin reached the summit as the first in 1906.


The best point to stars the journey is Zakopane – the biggest town on Polish side of Tatra Mountains. You can get there from Kraków by bus (most recommended), car or train:
By bus: there are a lot of buses from Kraków to Zakopane - time table of PKS and private lines Frey and Szwagropol.
By train: the road is much longer and dearer than by bus - time table from Kraków 0.00-11.59 a.m., 12.00-11.59 p.m. and from Zakopane.
By car: from Kraków take a road number 7 to Chyżne and follow it to Rabka. Here this road turn right to Chyżne, but you follow still straight a head in south direction by road number 95. In Poronin 5 km before Zakopane turn left (east) to border crossing point in Łysa Polana.


From Zakopane take a bus to Polana Palenica (time table of PKS, in high season there are a lot of private buses, too – a station is opposite to PKS) and get off in Lysa Polana. Cross the polish-slovak border . Bus station on Slovak side is about 100m after border crossing point on the right. Take bus to Poprad, which goes through Bela Voda, Tatranska Lomnica and Stary Smokovec (time table) and get off in Bela Voda.


From Skalnata Chata - the shortest and the easiest route on the summit.
From Chata pri Zelenom Plese - a longer but interesting route, by the way you visit Maly Kezmarsky Stit, too. 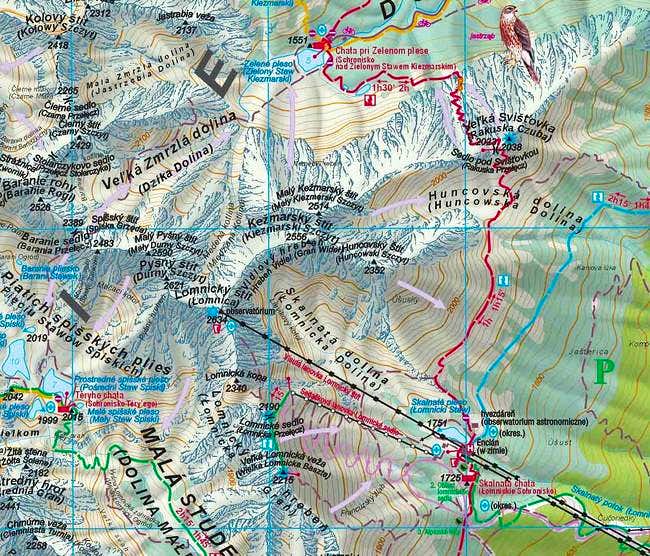 The best time is a summer and early autumn (july-september). But Kežmarský Štit is available all the year.

The “High Tatra” is a National park, UN Bioheritage area and a European BioHeritage - if you are not a member of any climbing club you can move only on marked trails - so you can visit Kežmarský Štit only with Tatra guide.


In winter time (from November the 1st – June the 15th) The Tatra Mountains in slovakian part are closed for normal tourists.


Absolutely no camping is permitted in the nature park. The nearest camping is in Stara Lesna and Tatranska Lomnica.


There are plenty of cheap hotels and pensions in the area of Stary Smokovec and Tatranska Javorina.
accomodation

Web forecast:
situation at this moment and forecast


Information of avalanche danger:
TOPR (in English) and HZS