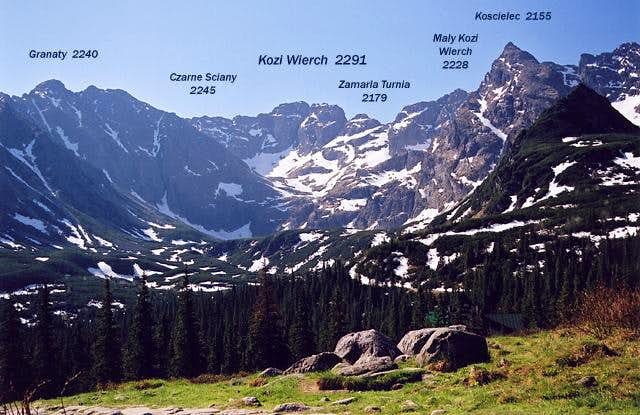 One of the most famous peaks of Polish Tatra Mountains is popular equally among tourists ,alpine climbers and ski-alpinists offering all attractions the high mountain enthusiast can dream of …Beautiful ,vertical ,220 meter ,granite north face (Sokolowski brothers 1921) staying real challenge for experienced climbers ,the whole system of exciting marked tourist routes with the most demanding and exposed marked route of Tatra Mountains – famous Eagles’ Path which crosses the massif reaching Kozi’s summit. In winter season when there is no avalanche danger one will find excellent conditions for ski touring on huge southern slopes of Kozi ,sloping down to Five Polish Lakes’ Valley (average slope’s angle for S slope of Kozi Wierch: 30-35% (up to 40%). (2005 season : great conditions for riding ski downhill from the summit to the valley till June).

For the dessert one of the greatest summit panoramas in whole Tatras !

The name of the peak was given to the mountain by sheperds from Five Polish Lakes’ Valley because of numerous mountain goat’s herds being formerly encountered there.
Sheperds from the opposite ,north side from Gasienicowa Valley used to call the peak – Czarne Sciany (Black Walls) due to its dark northern cliffs.

First known ascent (from Five Polish Lakes’ Valley) :
1867 – Eugeniusz Janota and Maciej Sieczka(guide)
There is a serious probability that some highlanders (sheperds or huntsmen) were on the peak earlier but there are no documented proofs for that fact. 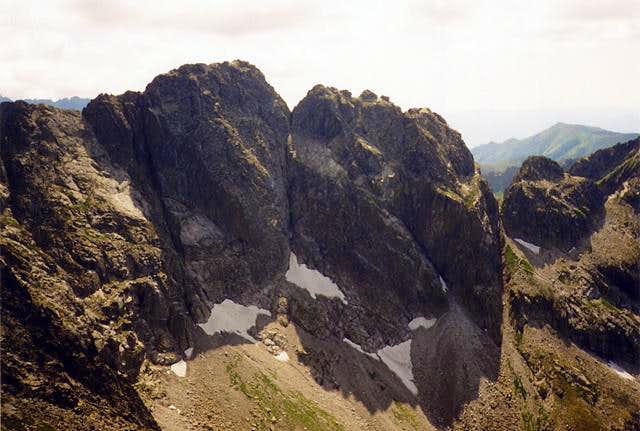 First of all You have to get to Zakopane town on Polish side of Tatra Mountains – very good communication(bus, train) links with Cracow City and the rest of Poland.

There are numerous bus and train connections between Zakopane and Cracow City(100 km), where the nearest inernational airport is located.

There are many possibilities for combining routes to climb Kozi Wierch Peak from among many marked routes of the area. Most of them are ready for normal tourist use only in “summer” conditions of good weather ,in winter they become serious alpine routes demanding good climbing skills ,experience and equipment.

Kozi Wierch can be climbed by high mountain tourists equally from north and south and above all by the ridge route of Eagle’s Path. Kozi Wierch from the West