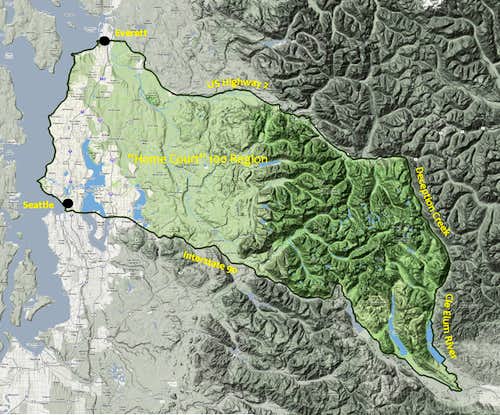 "Home Court" 100 Region
In the spirit of making lists of peaks to summit, Washington State has many lists. The most well known lists are the Bulger List and the Washington top 100 which both look at a statewide pool of possible candidates. The resulting lists include peaks from a broad geographical range and with many varying levels of difficulty.

The intent of the Home Court 100 was to create a similar list but which was slightly more accessible. It was created by a Jeff Howbert in the early 90's. Big thanks to him for doing all the logistical duties of analyzing the 19 USGS quad maps that went into the making of this list. The regional boundaries were drawn to include summits which were easily accessible to the "greater Seattle area". Most of the summits lie in the Alpine Lakes Wilderness but there are others which lie out of that boundary and some in the ALW which do not lie in the boundaries drawn for this list (I.E Mt. Stuart).

It is in fact the case that none of the peaks on the Home Court 100 (max. 7960feet) have enough elevation to warrant themselves a place on the other two lists (min. 8306 feet). What makes this list interesting is its proximity and thus availability to a large population base. Defined by a region and by a minimum of 500 feet of prominence the list has come to include a wide range of summits. From the easier walk up variety to the more technical climbs this list has enough to keep its pursuer's busy.

And because one list is never enough, Mr. Howbert went on to create the "Back Court" 100 list which encompasses the area east of the Home Court region.  This secondary list is also popular among peakbaggers.  See the Back Court 100 page created by gimpilator.

This List is a work in progress. If you have created a page or have a usable photo of any of the non-represented summits please let me know and I'll be sure to get it on here. Also if their is any incorrect information or something which should be added notify me about that as well.

It takes an incredible amount of determination to finish a list of 100 mountains. The "courtiers" are are an elite group of peakbaggers, the very first people to complete this list.  Bold indicates the "courtiers" who have finished both the Home Court and Back Court lists.

You need to reverse the names for Silver Eagle Peak and Bald Eagle Peak. Bald Eagle Peak is actually the 6259' peak east of Silver Eagle Peak (6241'). During the past half-century or so, the USGS made a clerical error when creating maps and accidentally reversed the names ofthese two peaks on the maps. Then online resources, such as Google Maps and Peakbagger.com, continued the error using the recent maps as a guide rather than the original correct information. Fred Beckey mentions this error in one of his books, but a great logical explanation and description has been provided by local peakbagger Mike Collins here. As a person dedicated to keeping SummitPost, and especially the "Alpine Lakes Wilderness"-related sections of SummitPost, as accurate as possible, I wanted to have you be aware of this issue to help your list maintain accuracy as well as to help limit the growth of a peak name error.

That is an interesting error. I looked back to the original list and it too had that error. I have just fixed it here though. I flipped two others based on information I found here on SP. On the original list Mt Hinman is sited as rank #3 with 7492 and Lemah Mountain is rank #4 with 7480+. Looking at the postings on SP I found that Lemah mountain was sited here as 7512 feet which would put it above Hinman. If that information is incorrect you may want to notify both me and the creator of those pages.

Isolation is spelled incorrectly. You need to give more love to Jeff Howbert. As it stands you talk about the creation of the list but no mention is made of the creator-- Howbert. Just a little link at the bottom to his site. Not only did he conceive of the parameters for the list but he had to do a lot of manual map work to come up with the list of peaks and the prominence and such. He should be mentioned prominently on the page since he came up with the idea and did all of the original work.

Thank you for the corrections. I make that typing error frequently io to oi. Not sure why. I have also added a bit more about Jeff Howbert. Let me know if you think it's appropriate.

I've attached pictures that you can use for Terrace Mountain, Alaska Mountain, and The Citadel. The pictures you have used for Bryant Peak and Alaska Mountain are not of the mountains themselves, but of views from the summit.

I finished on Venus Mons, aka Venus-Spade, aka Ares Peak on 18 July 2014. I think Don Goodman said at the time that I was the 4th finisher. I finished the Backcourt peaks about a year later: Horselake Mountain on 18 July, 2015. Chris Robertson

I checked the dates - seem my post above. Looks like I am the 5th Home Court finisher: Venus Mons, aka Venus-Spade, aka Ares Peak on 18 July 2014.