From the overlooks on Skyline Drive in Virginia's Shenandoah National Park, the most immediately obvious feature is the 50-mile mountain range to the west known as Massanutten Mountain. The elevations on Massanutten Mountain are not particularly tall even by Appalachian standards; the only real estate consistently above 3,000 feet is between Grubbs and Lairds Knobs near the southern end of the range. However, the peaks and ridges are filled with interesting opportunities for hiking.

Massanutten Mountain is the easternmost extent of the Ridge and Valley Appalachians in Virginia. The Ridge and Valley Appalachians are a series of mountain ranges to the west of the Blue Ridge Mountains and to the east of the Appalachian Plateau. Massanutten Mountain is a geological structure known as a synclinorium, which is a large syncline that has superimposed smaller folds. A syncline is a downward-curving fold, which has progressively younger layers that dip toward the center of the fold. The youngest layers are at the center of the fold and older layers are further outward.  The Massanutten Sandstone outcrops on the crests of the long, relatively level ridges.

The range is divided into two sections. North of New Market Gap, Fort Valley is between the two main ridges. Fort Valley was formed by Passage Creek; it is about 23 miles long and 3 miles wide at its widest point. It is an unusual valley within the larger Shenandoah Valley. A considerable majority of the hiking trails are in the northern section. South of New Market Gap, there are a series of tightly-spaced ridges known as First, Second, Third, and Fourth Mountains. The only substantial open space between the mountains is at the southern end, where the Massanutten Resort is located.

Native American tribes hunted in Fort Valley, but did not establish permanent settlements there. In 1707, the range was visited by Jean Michelle. The first settlements by colonists were not set up until after 1725. During the Revolutionary War, George Washington considered retreating to Fort Valley and using the natural defenses of the mountains if his army was defeated at the Battle of Yorktown.

Settlement continued after the Revolutionary War, and mining operations were established as well as farms. In the 19th Century, iron ore was mined at the northern end of Massanutten Mountain and in the middle of the southern section, which supplied the Elizabeth and Catherine pig iron furnaces, respectively. During the Civil War, the pig iron furnaces in the Shenandoah Valley supplied the Confederate military, and were attacked and damaged or destroyed by Union armies. 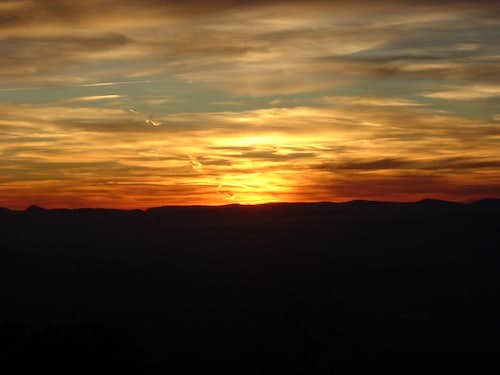 In the late 19th and early 20th Centuries, logging operations eventually stripped all the forests from Massanutten Mountain. The destruction of the forests and other resulting environmental degradation led to the formation of the George Washington National Forest in 1918. Many years of trail construction followed, with completion of the Massanutten Trail in 2001.

Fort Valley can be accessed from the north via SR 678. From Front Royal, go west on Route 55 for about 5 miles and then turn south on SR 678.  It can also be reached from the south via FR 274.  From Luray, follow US 211 to New Market Gap.  At the crest of the ridge, make a right on Crisman Hollow Road (FR 274).  All of the peaks in the northern section of Massanutten Mountain have at least one route to their summit that can be accessed from Fort Valley.

Other Hking and Rock Climbing

Ridges:  In the northern section of Massanutten Mountain, the main ridges are worthwhile hiking destinations in themselves, even without reaching a summit.  There are long stretches on the ridges without serious elevation gains or losses.

Rock climbing: Buzzard Rock, which is at the northern end of Massanutten Mountain, is a popular destination for hikers. It is also the only established rock climbing site in the range.  There are 29 routes established at Buzzard Rock with difficulties between 5.4 and 5.10a.

Winter sports: From 1875 to 1915, the Rockingham Springs resort was established at the southern end of Massanutten Mountain. The resort was rebuilt stating in 1971 and reopened in February 1973 as the Massanutten Resort. Currently, the resort has 14 trails for skiing and snowboarding and a snowtubing park on the northern slopes of Massanutten Peak.

Canoeing: The North and South Forks of the Shenandoah River and Passage Creek are popular sites for canoeing. The North Fork runs just to the west of the western ridge of Massanutten Mountain and the South Fork runs just to the east of the eastern ridge. Passage Creek runs through Fort Valley and out through a narrow gap at the northern end of the range.

It is relatively easy to combine a hike to Meneka Peak, Little Crease Mountain, or Point 2015 with a canoe trip down Passage Creek. However, experienced canoeists warn that Passage Creek is not for beginners.

Most of the peaks in the Massanutten range and the entire routes to their summits are on public property, except for Kaylor Knob, Lairds Knob and Massanutten Peak. In the northern section, the ridgetops are mostly on public land, while most of the valley is on private land.

Lairds Knob is on private property. The owners of the mountain have had significant problems with vandalism at the radio and cell towers south of the summit. As a result, they are unwilling to open the mountain to hikers at this time.

Massanutten Peak and the entire route to its summit are on private property. Hiking is open to non-members of the Massanutten Resort, but remember to check in the at the guard booth. Please do not light campfires and stay on established trails;it is especially important to stay out of ski areas while hiking.

Kaylor Knob’s summit and one of the routes is on public property; the first half of the other route is on the property of the Massanutten Resort. See above.

Free camping is available without a permit throughout most of the the George Washington National Forest.  The Veach Gap Shelter near Little Crease Mountain and the Boone Run Shelter near Kaylor Knob are available on a first come, first served basis. Tent camping is available in most other locations.  Camp Roosevelt is a large campsite with restrooms, picnic areas, and water faucets on SR 675 a few miles to the east of Edinburg Gap.  Elizabeth Furnace is a similar site on SR 678 near the northern end of Massanutten Mountain.  The fee for these sites is $10 per night; contact the Lee Ranger District for further information.

Camping on the grounds of the Massanutten Resort is only available to resort members.

Massanutten Mountain can be hiked nearly all year round.

Spring brings out many flowers, including irises, mountain laurel, and pinxter. In May, the western ridge is crawling with dark brown millipedes with red legs.

Summer brings more flowers and butterflies and opportunities for canoeing, but it also brings heat, humidity, haze that limits views, and hostile litter critters like mosquitoes, ticks, and yellowjackets. The best time for a summer hike is early in the morning.

Autumn brings cooler temperatures and beautiful reds, oranges, yellows, and lime greens to the forest. Many leaves are still on the trees at lower elevations at least until Veterans Day. Even the hikes without very much in the way of views are spectacular in autumn.

Winter often brings a blanket of snow to the mountains. Sometimes, it can be an inch or two of the light, fluffy stuff, but at other times, you can find yourself postholing through the wet, heavy stuff. Winter is the best time for bushwhacking, as the undergrowth is at a minimum, and the cold temperatures keep troublesome insects at bay.  The roads maintained by the Forest Service are closed from late January through late March, which closes some of the routes to Duncan Knob, Meneka Peak, Signal Knob, and Strickler Knob.  The ATV trails are also closed to motorized vehicles, which makes hiking to Opechee Peak much easier.

In 2019, deer hunting season with modern firearms runs from November 16 to November 30. Hiking on Massanutten Mountain should be avoided during this period.

The Potomac Appalachian Trail Club maintains the trails in the Massanutten Mountains, and provides maps, guidebooks, and other information. PATC's website also has a reprint of an article in its July 1934 Bulletin, which discussed the early history of human settlement in Fort Valley

National Geographic’s Map 792, which covers Massanutten and Great North Mountains, shows the location of nearly every peak in the range and provides an excellent overview of the trail and road networks. While it is not as detailed as a USGS topo map, it is more useful for looking at the big picture. If you want to know which trails are open to mountain bikes, this is your map.

Virginia Rivers has guides to canoeing in the North and South Forks of the Shenandoah River and Passage Creek. American Whitewater has information about water levels.

rockclimbing.com has more details about Class 5 climbing at Buzzard Rocks.

The Virginia Department of Game and Inland Fisheries has information about hunting seasons in Virginia.