The Massanutten Mountains form a series of ridges and narrow valleys towards the southern end of the range. From east to west, the ridges are called First Mountain, Second Mountain, Third Mountain, and Fourth Mountain. The highest point on the Second Mountain ridge is Kaylor Knob.

There are two routes to the summit. The Kaylor Knob Trail is popular with hikers and mountain bikers from the nearby Massanutten Resort. The Massanutten South and Second Mountain Trails offer a hike along a mountain stream, views of the surrounding mountains, and perhaps a chance to see a wild turkey. 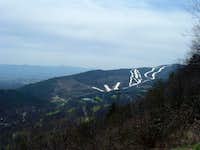 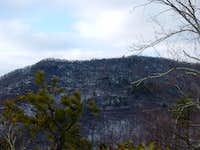 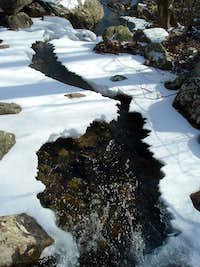 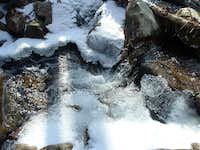 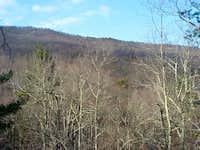 Massanutten South Trail: From Harrisonburg, go east on US 33. Turn left on SR 602 and follow it to SR 636. Make a left turn onto SR 636, which becomes Cub Run Road. There will be an open gate shortly after entering the George Washington National Forest. Park on the left side of the road near the gate.

The orange-blazed Massanutten South trail starts here, and follows Cub Run road for 0.2 miles. The trail branches off Cub Run Road to the left. There will be a fork in the trail after a stream crossing. Take the right fork and continue on the Massanutten South trail for 0.7 miles. After several more stream crossings, arrive at the junction with the blue-blazed Second Mountain Trail.

Turn left and cross Boone Run. Follow the Second Mountain Trail over a series of switchbacks; views of the Fourth Mountain Ridge open to the west. After 1.7 miles, the trail forks. Take the left fork, which is the Kaylor Knob Trail, and follow it to the summit. Views of Hartman Knob and Peterfish Gap are available to the east near the summit.

Kaylor Knob Trail: From Harrisonburg, drive east on US 33 until reaching SR 644 (Resort Drive). Turn left and follow SR 644 until Massanutten Drive, where you make another left. Continue to Del Webb Drive and make a right. Follow Del Webb Drive and up to the crest of the ridge, where there will be a parking lot on the left.

Park here, enjoy the views, and then cross Del Webb Drive to start on the blue-blazed trail. A pink-blazed bike trail follows the same route for a while, and then forks to the left. Continue on the right fork along the Second Mountain ridge. Limited views of Lairds Knob are available to the northwest. Shortly after the 1.5 mile marker (a blue diamond that reads KK 1.5), you will see this group of three trees at the summit.

Round trip: 3.1 miles with an elevation gain of about 700 feet when the small ups and downs on the ridge are factored in.

Massanutten South Trail: Kaylor Knob and the entire route to its summit are on public land in the George Washington National Forest. There are no fees or permits required. Please do not block the road.

Kaylor Knob Trail: The first half of the hike is on private property. Hiking is open to non-members of the resort, but remember to check in the at the guard booth. Please do not light campfires and stay on established trails.

Kaylor Knob can be climbed nearly all year round. Autumn colors reach their peak in mid to late October. The heat, haze, and humidity are at their worst in July and August; the best time for a summer hike is early in the morning.

Massanutten South Trail: Hiking should be avoided in the National Forest during the period in late November when it is permissible to hunt deer with modern firearms. In 2019, deer season runs from November 16 through November 30.

Kaylor Knob Trail: The first half of the trail is closed to hikers from early November to late February for hunting. As previously mentioned, the Kaylor Knob Trail is popular with mountain bikers. Check the Massanutten Resort website for dates of bike races on the trail.

Massanutten South Trail: Free camping is permitted throughout the George Washington National Forest except in the immediate vicinity of picnic areas and a few other locations, none of which are a problem at Kaylor Knob. The Boone Run shelter can be found about 0.1 miles further down the Massanutten South Trail from the intersection with the Second Mountain Trail. The shelter is on a white-blazed spur trail.