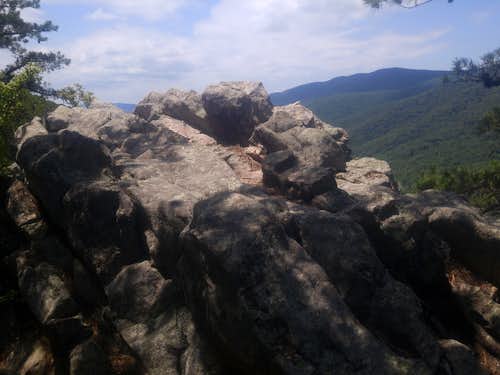 The Ridge at Buzzard Rocks
The Elizabeth Furnace Recreation Area has campgrounds, picnic sites, fishing, and trails, but it also has two very nice climbing spots: Talking Headwall and Buzzard Rocks. While climbers sometimes say they are going to climb at Elizabeth Furnace, it makes more sense to distinguish between the two sites, especially if friends are coming out later, obviously.
Talking Headwall is the easier crag to get to, but it is far less scenic than Buzzard Rocks is.
On the way to Point 2015, the northernmost peak of the Massanutten Mountain ridge complex, Buzzard Rocks is quite simply one of the best and the most scenic climbing sites in Virginia.
At Buzzard Rocks, it is mostly slab and the lower end of moderate. Most of the routes are bolted, but there are some pure trad routes, and some of the bolted lines have ample opportunities to place pro as well, so bring a light rack, which you'll appreciate on some of the longer sections between bolts.
While some routes are pretty short, others will use up almost all of a 70m rope for lowering or rappelling. Most of the best routes are also among the longest, and if you don't have a 70, plan to hike back down.
Although most routes are bolted, not all have anchors. Bring gear for building your own anchors as necessary. There are a lot of solid trees up top, so topping out and then using static line left up there to make an anchor is a good idea. It might be a good idea to throw a hasty anchor together before descending, even if it's not in the right spot, just so hikers passing by don't think there's a free rope sitting there.
Note: This page used to display images linked from route pages on Mountain Project. Now those links are broken. Instead of redoing the links, I am just suggesting that for photos of routes, you should go to the MP page for Buzzard Rocks and navigate from there. This crag faces west, and I have only climbed it in the morning, meaning pictures would have been lousy, so I decided to link decent pictures rather than upload bad ones. 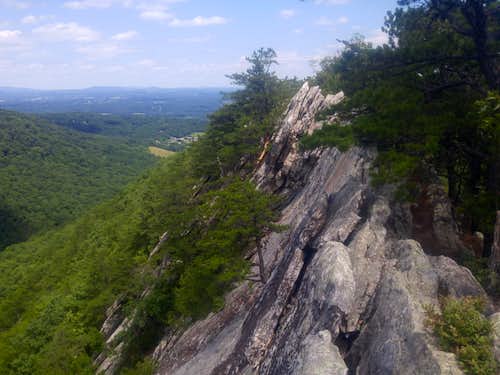 The Ridge at Buzzard Rocks

Exit I-66 at Exit 6 and head south on 340/522. After the bridge over the Shenandoah River, turn right at a light onto 55. Drive about 5 miles to the town of Waterlick. Turn left onto Powells Fort Road (SR 678). A little after a mile, turn left onto Mountain Road (SR 619). Then, again a little after a mile, turn right into the Buzzard Rocks parking area. There's a sign, but the spot sneaks up on you, even when you've been there before.
Hike the trail for 2 miles (actually about 2.3 miles), gaining around 600', until you are on an open ridgeline with a lot of pretty outcrops. There are at least three climber's trails that descend to the base of the cliffs. Find one of them.

The Mountain Project page lists 27 routes and the Rockclimbing.com page lists 25. On this page, I will list those whose exact locations I know. If the name is in bold, it is a route I have climbed. Routes are left to right as one faces the crag.

There is a campground in the recreation area, but I have not been there and do not know where it is. Please see the Forest Service site for information.