The true summit of Duncan Knob is a nondescript point in the woods in George Washington National Forest. It is situated on one of the smaller ridges in the northern part of the Massanutten Mountains. However, Duncan Knob is still frequently visited (although not as much as Shenandoah National Park) because of the spectacular views from an overlook near the summit. It is also the only peak in the Massanutten Mountains that requires a Class 3 scramble to reach the summit.

Hike up the blue-blazed Gap Creek Trail for 1.5 miles until reaching the crest of the Middle Mountain Ridge. Turn left onto a white-blazed spur trail and follow it for about 0.2 miles to the rock slide near the summit. Start the Class 3 scramble up the rocks to the summit overlook. The true summit is in the woods behind the overlook.

Hike up the yellow-blazed Scothorn Gap Trail for 1.4 miles until reaching an intersection with the Massanutten Trail. Turn left and continue on the Scothorn Gap trail for another 1.6 miles to the intersection with the Gap Creek Trail. Turn right and hike up the Gap Creek Trail for 0.2 miles to the crest of the Middle Mountain Ridge. Turn left onto the spur trail and follow it for 0.2 miles. Scramble to the overlook.

Round trip: About 6.8 miles with an elevation gain of about 900 feet. 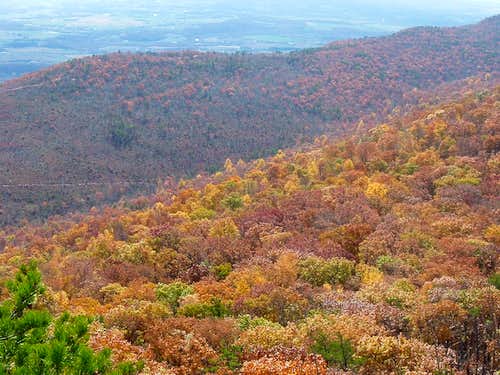 Views to the east 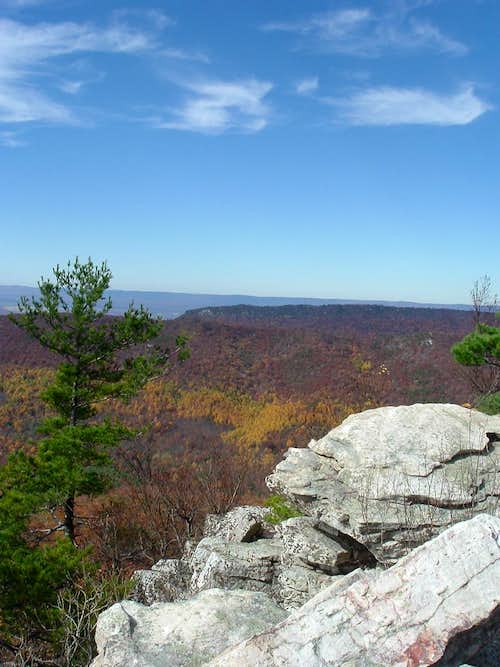 Views to the west

Duncan Knob is on public land in the George Washington National Forest; no permits are necessary for hiking or camping except at Camp Roosevelt.

Camping is permitted in most locations throughout the National Forest. Camp Roosevelt is a large campsite with restrooms, picnic areas, and water faucets near the intersection of SR 675 and the Massanutten Trail. The fee is $10 per night; contact the Lee Ranger District for further information. There are also good free campsites available on the ridge near the intersection of the Gap Creek Trail and the summit trail and in Duncan Hollow near the Massanutten Trail.

Duncan Knob can be climbed nearly all year round. Fall colors are at their peak in mid to late October. Summer is the worst time for mosquitoes, ticks, and other hostile little critters. The heat and humidity are also at their worst in summer, and views tend to be more limited by haze. The best time for a summer hike is early in the morning.