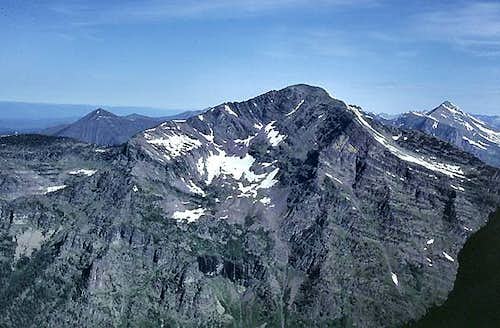 Mount Brown from the southeast.
The Southwest Ridge Route follows the left skyline 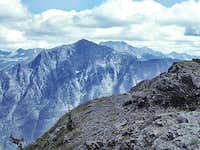 Mount Brown is located just northeast of the northern end of Lake McDonald on the west side of Glacier National Park. It is one of the first larger peaks seen by visitors entering the Park from West Glacier.

The summit of Mount Brown offers excellent views of much of the Park. In fact a fire lookout was constructed low on its southwest ridge in 1929 because of its vantage point.

The mountain is named for William Brown, the Solicitor General for the Chicago and Alton Railroad. Several members of his party on a camping and fishing trip to the area around Lake McDonald climbed the mountain in 1894 and named it after their ascent. This was probably the first ascent of the peak.

Mount Brown is normally climbed in a long day from Lake McDonald.

On a good day, Mount Brown can be seen near the center of the Lake McDonald Web Cam. For peak names, see This Photo

Glacier National Park is located in northwestern Montana. Going-to-the-Sun Road is the main scenic route through the Park and the way to Logan Pass and Heavens Peak. It is not kept open during the winter. Closing in the fall and opening in the spring depends on snow depth and conditions. Opening can be as late as July.

Mount Brown is approached via the Mount Brown Lookout Trail, which starts near the Lake McDonald Lodge. 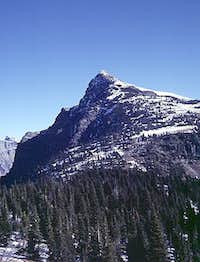 The most logical and only well established route on the mountain is the Southwest Ridge The ridge is accessed via the Mount Brown Lookout Trail which climbs about 4325 feet in 5.4 miles from near the Lake McDonald Lodge. From the lookout, it is another mile and 1,500 vertical feet to the summit. Most of the ridge is class 2 and 3 except for a class 4 section that must be climbed to gain the ridge above the lookout. It is possible to bypass this section by making a long traverse along the west side and then ascending class 3 ledges up to the ridge. The Glacier Mountaineering Society rates the climb: III(4)ML

Edwards suggests that one could climb the mountain directly from the highway via the largest gully on the west face - as practice for "more serious climbs in the future". This would probably be a class 3 and 4 route with much bushwhacking at the bottom.

Climbing on the ridge: 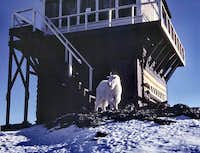 The Mount Brown Lookout is on the National Historic Lookout Register. It was constructed in 1929 and last manned on a full time basis in 1971. It was rehabilitated in 1999. 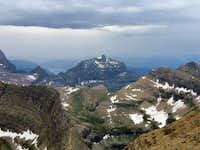