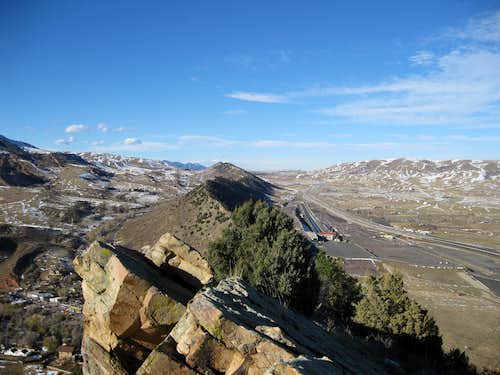 Ridge along the Mount Glennon summit
Mount Glennon is one of the nine Hogbacks, which are located directly west of Denver. People consider the Hogbacks to be where the Rocky Mountains start, in the Front Range of Colorado. Also, it is conveniently located less than five miles from the famous Red Rocks Park and Amphitheater and from its summit, Mount Morrison appears to be towering over the geological wonder. Also, a clear view of Denver and its huge suburbs can be seen from the summit. Civilization has built itself around these Hogbacks, but they still stand out and act as a very important landmark in the Front Range. Mount Glennon is no different than the rest of the Hogbacks. While on your way to the summit, you spot very old rock with ripple-marks and many layers can be seen from its saddle with Dinosaur Ridge and Unnamed 6262 (both Hogbacks). The mountain is also marked with many small dinosaur remnants, however they do not compare to the large dinosaur footprints that are found halfway up Dinosaur Ridge. As you drive along US 470, you look directly up Mount Glennon and see that its slope appears to be around a class 1. Don't be fooled, the mountain contains very dangerous terrain and if you plan on reaching the summit, you must be prepared to climb across some class 2+ pitches. 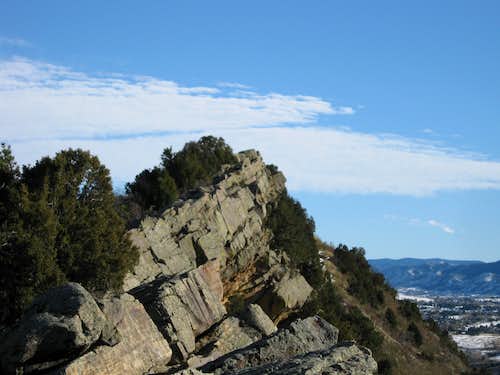 Ridge to the summit of Mount Glennon 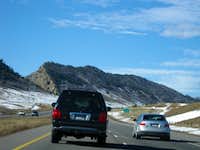 Any route that you take, you will be in Mount Glennon Open Space, which prohibits pets and bushwhacking along with walking off route. The area is protected for Red Rocks Park and Jefferson County so please read up on further regulations applying to the area. 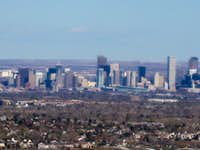 Camping is prohibited any where near Red Rocks Park and Mount Glennon Open Space. There are many hotels in Littleton and many camping options in Bear Creek Park or Chatfield State Park.

FYI, JCOS permits dogs, as long as they are leashed 100%. That said, this is not a very good park for dogs. Also, it is not against JCOS regs to "bushwhack" or be off-trail; they don't encourage it, but it is within regulations. Lastly, the north end of this peak is a bouldering area in progress - The Black Hole: http://mountainproject.com/v/colorado/morrisonevergreen/morrison_boulders/105745151