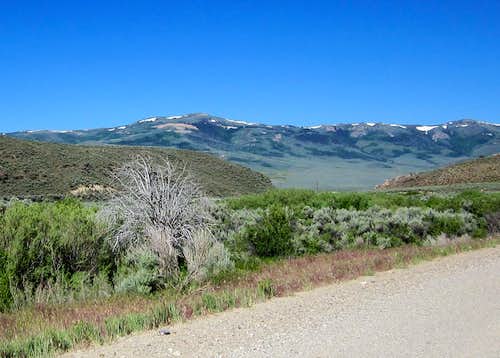 This peak is a drive up BUT it isn't your ordinary drive up. Please read the "Red Tape" section to understand what I am talking about. I am posting this peak to save interested peakbaggers who are chasing the Utah prominence peaks the misfortune that befell me last year when I tried to access this peak without the knowledge that I have now listed in the "Red Tape" section. Now, on to the overview of this one.

The Goose Creek range is found in the northwest corner of the state of Utah and is in a very "hard to get to" area. Hard to get to mainly in the sense that the only access is via miles and miles of dirt roads no matter what direction you come from. According to peakbagger.com, the high point of this range ranks 81st on the Utah 2000' prominence list and with but 2004 feet of prominence, that makes it last on the list. Lists of John also ranks it 81st.

Goose Creek is also the name of a small town located just to the south. As were passing through the town, they were getting ready for the 4th of July. A nice photo album of the town is found HERE. Check it out if you have the time. It is of course, mainly a ranch and farm area and many of the residents are descendents of the folks that originally settled the land.

The access is a real problem now and according to a couple who did it in 2009, access to the summit was a non issue. That has now changed. See the "red tape" section for more info. 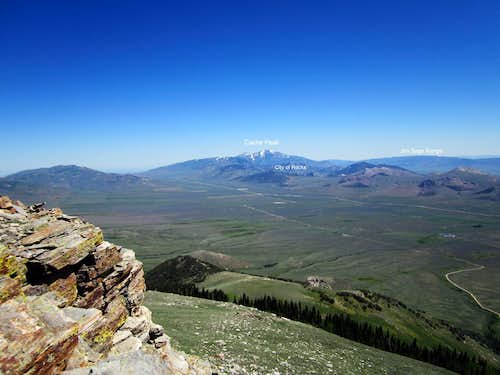 NE from the summit

From the north and I-84 at Burley
Head south on highway 27 as it heads for Oakley, around 22 miles from where you leave the freeway. There is a Wal Mart and gas stations along with fast food places. From Oakley turn east out of town and then the road heads south with some signs for City of Rocks. Pass those signs up and keep heading south, crossing from Idaho into Utah. From Oakley to the key junction you want to get to, it is about 32 miles. With a GPS using lat/long and nad27 as your datum, the waypoint is 41.85165 -113.7905.

Turn onto the dirt road which had the large red No Trespassing signs on both sides of it when I was there in July 2011 and use the two route maps I have posted here. The roads that lead near the summit are new and aren't shown on any map so I have placed an idea of where I believe the road to be. Use a GPS waypoint for the aiming for the summit, it will help greatly as it worked well for us. We had no maps to help but the owner of the mining operation had mentioned that a road will take us nearly to the top.

From Salt Lake City, drive to Snowville on I-84 and take highway 30 to Grouse Creek Junction, not far from the Nevada border, passing through the small communities of Park Valley and Rosette. Its a good idea to gas up in Snowville as fuel is not plentiful in the area you will be heading. From the Snowville turnoff, it is close to 85 miles to get to the turnoff for Grouse Creek (see the GPS coordinates on the area map). Then drive 20 miles north on a well graded dirt road to the community of Grouse Creek and you'll find that this area has paved its road for several miles through the area. Then drive about 12-13 miles from the community of Grouse Creek to the key turnoff (also on the route map with GPS coordinates)and turn left on the road with the No Trespassing signs seen in a couple of my pictures. From the turnoff to the summit area, it is a bit less than ten miles.

There is a shorter way from Salt Lake but it entails driving many more miles on dirt roads. It is via the Naf-Strevell road that is just north of the Idaho border and goes through the community of Naf and heads for the junction mentioned above near Lynn. For this one, refer to the Idaho Benchmark book (a map book) as I am hesitant to try and describe how to get there via this road although it isn't all that difficult. It does save a lot of miles so some research on your part might be well worth the time.

This is the reason for posting this page. I wasted a trip in 2010 only to find out that it was heavily posted for "No Trespassing". The two other SP members I was with had just been to the summit the year before and had not encountered the restrictions now present. So in the case of Red Tape, there is lots of it in this case. This land is privately owned and is being actively mined. No trespassing signs are plentiful and somewhat threatening. HOWEVER, we were able to get permission to visit the top of this mountain by contacting the manager of the mining company, based in Murray Utah.
American Stone, 801-262-4300. They were nice on the phone and granted a verbal OK,  but suggested not to visit when the mine is operating so that leaves the best time to visit the mountain is on a non working day, which translates to a sunday or a holiday. The mining operation is literally just 50 feet from the summit at the time of our visit and there is no way you can access this mountain during mining operations. One thing is for certain, it is possible that this mountain could lose its prominence if they end up mining the top of it which appeared to be a possibility. 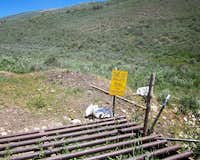 There are no campgrounds in the area however you could camp at Idaho's City of Rocks which has many campsites (which can be filled during a busy weekend). Otherwise, you will need to look at trying to find a place on BLM land. Since this peak is a drive up (with permission from owners), you should be able to visit the summit and be a good distance away on the same day.

Grouse Creek.com had this information on camping possibilities

Also check out this page for accomodations near Grouse Creek.

A forest service campground can be found to the east:
Clear Creek Campground. It has 8 spaces and is located at the base of Bull Mountain. It has decent campsites and vault toilets. A creek runs through the campground and was running when I visited there for two days in mid September in 2010.
This link has more information on this quiet campground 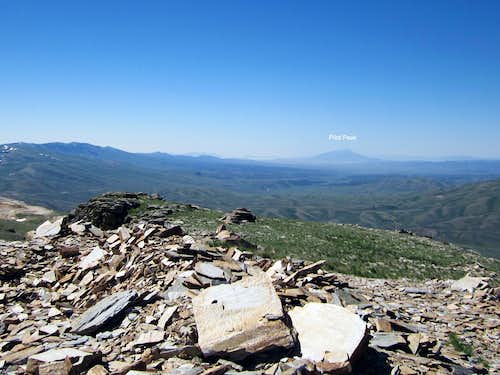 South from the summit

Red Butte is another of the top 100 Utah prominence peaks can be combined with a visit to this one. It is the 87th on the top 100 list.
Also nearby is Ingram Peak which has a SP page about it.