Abajo Peak is the highest point in the Abajo Mountains. Located in scenic southeast Utah, this isolated mountain group rises prominently above the town of Monticello, and is an oasis of greenery in the Utah desert. The Abajo Mountains are located in the Manti-La Sal National Forest, and are almost always referred to as the Blue Mountains by locals.

The gentle Abajo Mountains don’t rise in quite as a steep and spectacular fashion out of the desert as do some of the other ranges in the region such as the La Sal Mountains and Henry Mountains. The slopes rise very gently up to 7000-8000 feet before rising as rounded domes. Because of this, they don’t appear as high as they are, thus the origin of the Spanish name Abajo, or “the low mountains”.

The Abajos have a number of trails, scenic roads, and campgrounds, but are used mostly by locals and are not well known. The mountains also provide a welcome relief from the desert heat.

Unfortunately (at least for climbers) the summit is reached by a pretty good road and is festooned with several communications towers. The mountain is still perhaps saved by the fact that the road is only open for a few months a year and by the fact that there are several good hiking routes. To my knowledge, the summit road is the second highest road in Utah, after the one crossing the Tushar Mountains.

Also, this may be the highest mountain in Utah which is forested all the way to the summit. With a drier climate, the south faces of the mountains are mostly grass covered, while the north facing slopes are covered with pine, fir, spruce and aspen forest.

The mountains are a laccolith made of a granitic type rock, but absent are the rugged cliffs and spires usually associated with granite.

The old Blue Mountain ski resort is on the northeast side of Abajo Peak. For many years, the ski resort was the only place to resort ski in Southeast Utah. The ski resort was abandoned years ago due to lack of profitability. 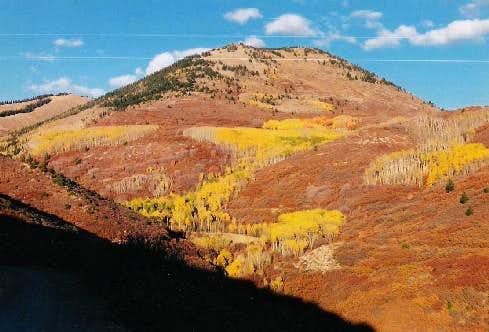 From Monticello, take the paved Forest Road 105 six miles west to the Dalton Springs Campground. Drive about a half mile west of the campground to the start of the North Canyon Road 079 on the left side of the road. After about three miles there is a faint path on the left, which may or may not be marked by a sign. Park here. Alternately, you can continue up the road to North Creek Pass.

From Monticello, take the paved Forest Road 105 six miles west to near the Dalton Springs Campground. Just before the campground is County Road 118. Turn left and follow to County Road 118 to the end at the old ski resort.

From Monticello, take the paved Forest Road 105 east a short distance to CR 102. Turn left (south) [marked for Loyd Lake] and follow CR 102 (which eventually becomes FR 0087) to the summit of Abajo Peak. This is mostly a good road and is only really rough at the very end. 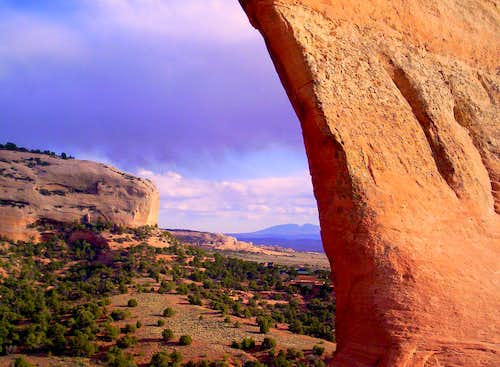 If you come from Moab and the north, this is the view you will get of the Abajo Mountains from Wilson Arch (which is located right off Highway 191).

From just short of the pass, a faint trail does reach the summit of Abajo Peak. This route follows a faint trail to Cooley Pass and eventually to the summit road. See the Route Page for details.

An alternate route starts right at North Creek Pass. A game(?) trail heads south over the hills to Cooley Pass. Much of it was buried in snow on our ascent in mid June.

I have not tried them, but the southeast face looks like it might have some interesting spring snow climbs and the west ridge of Abajo Peak, known as the Jackson Ridge would be an interesting route as well.

No permits are required. Camping is not allowed around the high peaks. Do not disturb the communications facilities.

Because this is a watershed for Blanding and Monticello, the Forest Service has banned camping around the high peaks of the Abajos. 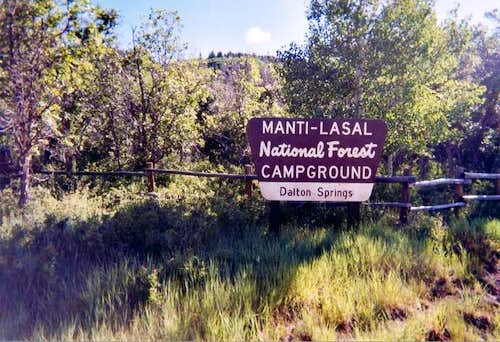 The summit road is usually open from around late June through sometime in October, so if you want to climb the mountain without the chance of a vehicle up there, climb outside this time period.

You should be able to drive to North Creek Pass after early to mid June (or earlier) depending on the year.

Fall is a rather colorful season here and can be a good time to climb (though wear blaze orange for hunting season).

The road to Dalton Springs is open year round making the mountain rather accessible year round.

Abajo Peak would make a fine winter climb from the Old Blue Mountain Ski Resort. Because it follows a ridge route, avalanche danger should be minimal. 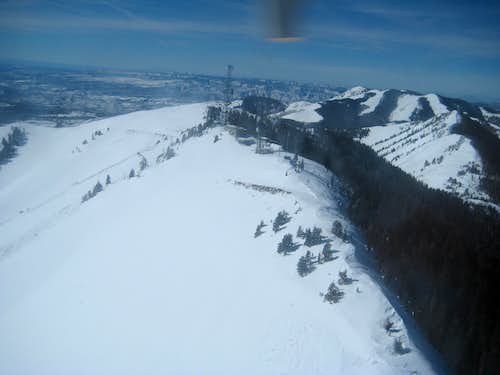 Winter view of the summit from a helicopter.

Below is the climate summary for nearby Blue Mountain Ski Resort (no longer operating) at 9175 feet elevation, on the slopes of Abajo Peak. These are all averages, so expect more variation, but this will give you a good idea about the climate at higher elevations in the area. The highest elevations are typically a bit colder (due to higher elevations), wetter, and receive a bit more snow than the old ski resort. *National Weather Service Data.