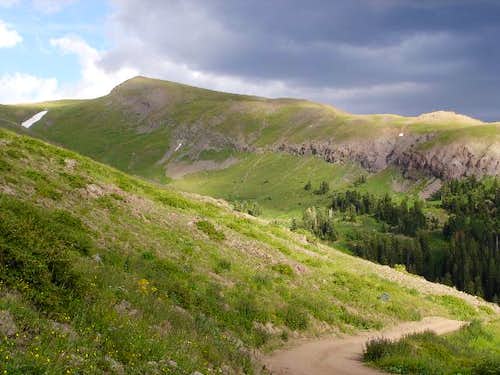 Delano Peak is significant in the fact that it is the highest point in Beaver and Piute counties, a twofer to those who chase county highpoints. It is not a difficult peak to climb which results in many people visiting the summit every year. At over 12,000 feet in elevation, it is a worthy goal for many who are chasing the state list of the highest peaks. .

The summit is a tremendous viewpoint as views are plentiful in all directions. The view to the north shows some of the special topography that makes Utah a unique and varied state.

Delano Peak was named for the Secretary of the Interior, Columbus Delano, who served under President Grant. Other interesting nearby peaks are Mt. Belknap and Mt. Baldy

Drive to Beaver on interstate I-15 and take either of the two exits and head into the center of town. Look for state highway 153 and head east through a scenic canyon that winds for 16 miles to FS road 123, also knownand signed as the Big John Flat road. Not far from the mile 16 marker, look for a sign on the right side of the road directing you to "Big John Flat" road The road is to the left across from the sign so take the dirt road heading slightly uphill to the left. Take this one and stay left at
all junctions until you come to Big John Flat, an area where camping is allowed and a new restroom facility has been built. It is nearrly 5 miles to the Big John Flat campground and restroom area, passing two gates that are closed when snow is in the high country.

To get to the spot where I found a nice cross country route, it is exactly 5.4 miles to a spot just off the road in some trees (for shade) where you can park or even camp. Car parking spot (38.36650° N, 112.39555° W) 10,480 feet. Having the co-ordinates for the summit in your GPS will make this route easy to do. If you have 4 wheel drive, continue on up to Poison creek (another half mile or so) to begin your hike.

Another approach, as listed in the book "High in Utah" begins at the Elk Meadows ski area and summer resort, listed as 18 miles from Beaver via road 153. Continue on past the resort area to 1/2 a mile beyond the 20 mile marker sign and watch for the trail (poorly signed) that is on the north side of the highway. It is listed as about 10 miles round trip with an elevation gain of 2100 feet. However, I see no reason to use this route since the Big John Flat route is shorter and much more direct. This would be a reasonable route only if the Big John Flat road is gated or closed in any other way (fire danger, etc) 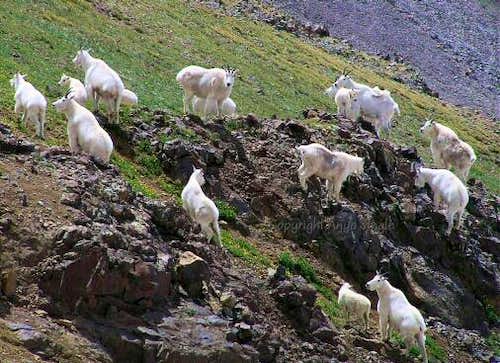 None that I'm aware of. No permits necessary or parking fees imposed. There are two gates that you pass through on the way to Big John Flat and if there is snow higher up, these gates may be closed. 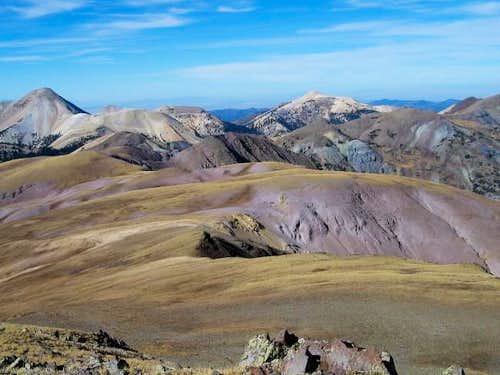 Summer and fall would be the best time for doing this one although a snowshoe effort could be made from the ski area I suppose. Mike Kelsey describes an ascent he has made in the winter time of this peak so his book "Mountaineering in Utah" may be worth your time to look at.

Routes: This is a totally non technical mountain and can be climbed from any direction. Park your car somewhere and head upwards and you will find the summit easy to attain. The only problem for some people will be the altitude, since this peak rises to over 12,000 feet. A good idea is to plug in the peak's GPS co-ordinates (if you have a GPS) and you'll find it no problem nail it. An approach is given in the "getting there" section above that comes in from the ski area. See the Poison Creek route that I've listed for more details on the best way to climb this peak. 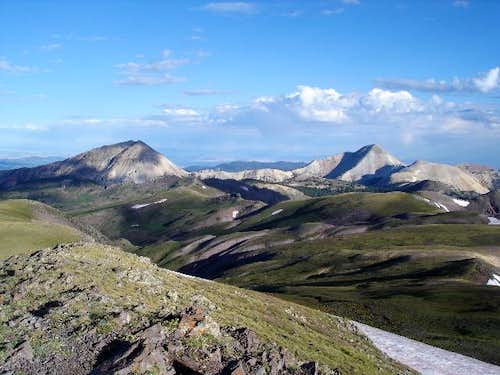 Mahogany Cove Campground between Beaver and Elk Meadows
is near the 11 mile marker. It is a fee campground but has water and
restroom facilities.

Big John Flat has camping spots as well as a modern outhouse. I am not sure if a fee is charged.

Mountain goat country. I personally saw over 45 of them during my brief stay on this peak. I counted several groups and some mountain goats that were by themselves. I was wishing for a pair of binoculars to observe them better with.

Also, I noted in the summit register (a gatorade bottle) that there had evidently been a plane crash the previous year with several fatalities. Many of the entries were comments made by those who were the first on the crash site. One of the pics posted shows a tarp covering some wreckage just south of the summit. The summit register today is contained is a nice mailbox. 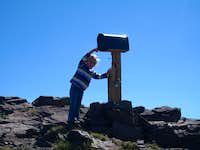 If you have information about this mountain that doesn't pertain to any of the other sections, please add it here. Also, if you have a good picture of the full mountain from a distant viewpoint, I'd be happy to make it a signature photo until I can get back into the area and get one of my own.

I was drawn to this peak because I am a county highpointer. More info on this group can be obtained at www.cohp.org.

Utah has a page showing a map of the counties and additional info and trip reports on the other Utah county higpoints.

See page 240 of Tyson Bradley's "Backcountry Skiing - Utah"
Some good backcountry skiing to be had in this area. Elk Meadows is an area that has been developed but the status of whether it is open or not right now is hard to discern. Still, here are a few articles that might interest skiers.

The promotional blurb for Elk Meadows has gone like this: Elk Meadows! When the dry, fluffy powder blankets the Tusher mountain range east of Beaver, Utah's Elk Meadows comes alive for winter enthusiasts. For 25 years Elk Meadows has been the secret getaway for skiers and snowboarders who like to have fun. Our new Lakeview quad chair allows enough time to catch your breath on a panoramic ride up to your next powder stash. For the snowboard novice or expert we have expanded the snowboard park located in the vicinity of the Imagine run. The Upper Lodge offers brand new rental equipment for the 1997-1998 season and our ski school is better than ever, taking advantage of its newly expanded area. Located 3.5 hours from SLC just off I-15. Six lifts with 36 runs over 400 acres. Lift pass prices TBA. Phone 888-881-SNOW www.elkmeadows.com

Delano Peak is the most prominent peak in the Tushar mountain range. It ranks #9 out of Utah's 84 mountains that are listed and has a prominence of 4689. What is prominence you ask?

I would add to this description that each mountain range can only have one peak that gets the honor of highest or biggest prominence. Mt. Baldy and Mt. Belknap, both peaks with prominence that is meaningful in their own right are still part of the Tushar mountain range and therefore have to bow to Delano Peak in this matter of prominence. All peaks have prominence and here is a nice reference provided by SP member wwoods. I hope this is clear as it took me a while to
fully understand the concept.

As you can see, prominence doesn't actually correlate with the mountain's elevation. It is dependent on where the saddle contour is found. The more you learn about prominence, the more intriguing
it becomes.

I have removed the map of the route I took to the summit. It is easy
enough to figure out from a Benchmark map book or topo Utah. Just
GPS the summit and find your way to the top, it makes it more interesting.

Since Delano Peak straddles the dividing line between these two counties, you might find it interesting to know a bit more about each county. First lets look at Beaver County

The 2000 census showed a population of 6,005. Where did it get the name?
From the Oregon State Beavers. No, just kidding. It was named for the abundance of beavers in the area. Its county seat and largest city is Beaver
which is an important stop for travelers off of I-15 as it heads north to Salt Lake City and South to Las Vegas.

While explorers first visited present-day Beaver County in the 1776 Dominguez-Escalante Expedition, the county was created by the Utah territorial legislature when Latter-day Saint settlers founded the city of Beaver, Utah in 1856. It was an important stop for the early travelers, many of whom wintered in St. George, a journey of several days from Salt Lake City in the late 1800's.

A small county with a small population. The county seat is Junction (ever hear of Junction Utah?) and the 2000 census showed just 1,435 folks who called Piute County home. It was named for the Paiute tribe of Native Americans. The largest city is Circleville.

I'll have to do some digging to get some history on this county but I hope to add that in the near future.

Hiking or climbing in a mountain environment has risks. Any who choose to participate in such activities must assume the responsibility for their own actions and safety. Any information provided here cannot substitute for your own sound judgement and decision making skills. For example, hiking into an electrical storm or during an electrical storm is reckless and dangerous. It is not my intent to describe every risk you may encounter on visiting this area but the author of this page is not resposible for your safety. You need to be prepared for the unexpected and proceed accordingly. All risks are assumed by the participant.

The ski area is now called Eagle Point and is definitely open.