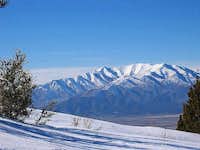 Flat Top Mountain
Utah is home to some great mountain scenery. This includes famous National Parks like Bryce Canyon, Zion, Arches, and Canyonlands. In addition it is one of the most mountainous states. This includes 81 peaks with a prominence of 2,000 feet or more. Utah also has 8 Ultra Prominence Peaks within the continental United States. These peaks provide a wide range of difficulty. Some are also very remote. Also, if you include 3 error range peaks, that gives a total of 84 peaks that have at least 2,000 feet of prominence. Also, twenty of Utah’s twenty-nine county highpoints are also P2Ks. Though two peaks (Delano and Thurston Peaks) are County Highpoints for two counties each.

In compiling this list, I found that a staggering 70 out of these 84 peaks already have a SummitPost page. Nevada, which has more than twice as many 2,000 ft. Prominence peaks, has about the same number of pages with a SP page. This is in large part due to one particular SP Member’s interest in Utah Prominence Peaks since he has moved there a few years back. That person would be Dean. Thanks for all your efforts Dean, as well as all the others who have wrote mountain pages on these peaks!

This list was compiled using the “mean prominence” value. Peaklist uses its ranking system with this method (81 peaks). However, if you use the “clean prominence” value, then there are also 81 peaks in Utah with 2,000 feet of prominence. Peakbagger uses this method. The order of these peaks though is slightly different on Peakbagger. In addition, there are also the 3 peaks that are in the “Error Range” of having 2,000 feet of prominence. All of these peaks were on SummitPost at the time of writing this.

On a side note, it is probably not likely that someone today could climb all 2,000 foot prominence peaks Utah has to offer in his/her lifetime. One lies within the Dugway Proving Grounds, a large military test area, that is off limits to the public. Granite Peak, number 48 on the list, is the lucky mountain.

Current Total with a SummitPost Page: 79