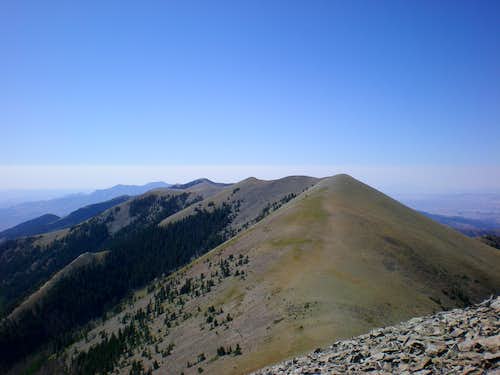 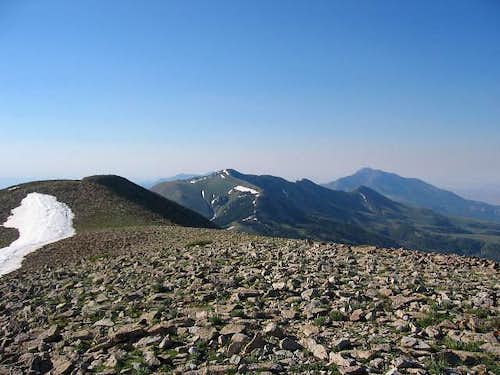 Looking south from the summit with Mt. Pennell in the distance

Mount Ellen is the highest peak in the Henry Mountains, a hard to get to range in south central Utah. The Henry Mountains were the last mountain range in the lower 48 (United States) to be mapped and surveyed. From onlineutah.com, the following information is found:

"The Henry Mountains are about 60 miles long by about 20 miles wide, and are located in Garfield County, Utah. The nearest settlement is the town of Hanksville to the north. The range is bounded on the east and south by the Colorado River and its tributary, the Dirty Devil River; on the west by the Waterpocket Fold; and on the north by the San Rafael Swell. The vertical relief between the Henrys and the surrounding plateau regions ranges from 6,000 to 8,000 feet."

Mt. Ellen is also the county highpoint of Garfield county and is the King, errr, Queen of the Henry Range. Mount Ellen, is a huge mountain many miles in length composed of three sections: a South Ridge, a North Ridge which has the actual high point of 11,522 feet, and, one mile further north yet across a 400' drop, Ellen Peak, a conical pyramid of 11,506', This is a very attractive peak, one that begs to be climbed if you have the time.

The other peaks of the Henry Range are Mount Pennell, with an elevation of 11,420 feet; Mount Hillers, 10,723 feet; Mount Holmes, 7,930 feet; and Mount Ellsworth, at 8,235 feet. You could easily spend a whole week in this range, bagging a peak every day. Take a 4WD high clearance vehicle to access the likes of Pennell and Ellsworth.

A bit of history: Mount Ellen was named in honor of Almon Thompson's wife, who was also John Wesley Powells sister. Thompson was Powells second in command for the government surveys that were conducted in the area.

Another attraction for those who want to stand on the summit is the fact that Mt. Ellen is listed as one of the 57 mountains in the lower 48 that have 5000 feet of prominence, often called an "Ultra" by those who are pursuing such lists. Other Ultra peaks in Utah are
Kings Peak
Mt. Timpanogos
Mt. Peale
Mt. Nebo
Ibapah Peak
Deseret Peak and
Flat Top mountain.

Only dirt roads access the area and are to be avoided in any kind of wet weather. The roads would quickly become impassable due to the clay like soil which becomes "slimy" and trecherous. The two main routes to this area are: 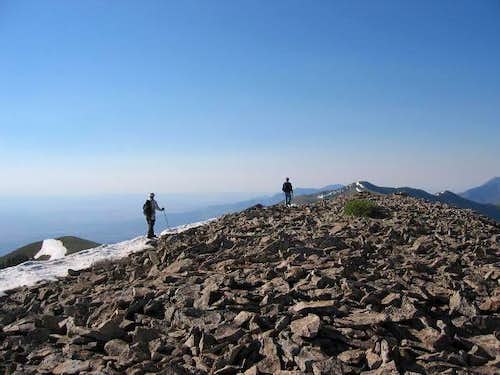 Highway in the sky

From Salt Lake: The quickest and shortest route is to exit at Spanish Fork and take highway 6 through Price. You are close to Green River (gas) when you hit I-70 or you can go west a bit on I-70 and take the highway 24 to Hanksville turnoff.

West side route:
From Hanksville, go west on Utah 24 till you see a turn off to Notom, a few miles west of Caineville. The road to Notom is a dirt road but one that is in good condition. It is roughly 13.5 miles to the Sandy Junction turnoff (from highway 24) so go past Notom and head for the junction found here just before the Sandy Ranch. From this junction, go east for 19 miles to the McMillan Spring campground (noted on signs). You'll need to ford Sandy Creek once but we saw that even two wheel drive vehicles had made the ford with no problems. The road is basically in good shape and 2WD would be adequate but roads of this nature are subject to change and a high clearance vehicle would be recommended. From McMillan Spring campground (a good place to camp), it is 5 miles to Bull Creek Pass and the TH. The road had been cleared recently as two avalanche paths had been cleared from the debris and twisted trees. The road is also traveled by ATV'ers so it is good to keep an eye out for them.

East route from Hanksville: This route was closed to travel from the Lonesome Beaver campground due to avalanche debris obscurring the road to the pass. A snow drift blocked us from further travel just east of Bull Creek Pass so I did not travel this road despite my intent of traversing the range. I will quote from Scott Surgent who has taken this route:

" From the junction of UT-24 and UT-95 in Hanksville, the Sawmill Basin Road was 9.3 miles south along UT-95, and not well marked (the sign is set in a bit and very old and beat up). Six miles west along this road I came to the main road into the range, and re-zeroed my odometer. At about mile 4.5 I put my truck into 4WD, for better handling over the intermittent rocks and inclines. I came to Lonesome Beaver Campground at mile 9.0 - it was closed. I chose to drive to Wickiup Pass and found a wonderful campsite on a ridge top at elevation 9,340 feet, all to myself. I could see the Ellen range top to my north. Bull Creek Pass was 13.4 miles total from where I zeroed my odometer, about a half-mile shorter than what the High in Utah book stated"

The High in Utah book has a description of the east side road but Scott's is one I trust.

Anyone who has taken this road (from the east ) could email me and I'd be happy to add your information on this route. Bull Creek Pass is where you park your vehicle

Probably from mid june to mid october. Rains or snow could make the roads impassable very quickly so any travel in this area must be done with an awareness of the weather reports.

Here's a warning from utah.com:

Caution!
Henry Mountains The Henry Mountains area is extremely remote; BLM personnel do not make regular patrols of the area and the chances of meeting other people in the area is low.

The region is very rugged and dry. Carry extra water regardless of your planned length of stay. Be sure your vehicle is in good working condition.

Over 30 percent of the precipitation in the Henry Mountains falls in July and August, usually in the form of heavy thunderstorms which may temporarily wash out roads. Roads other than Utah highways are either gravel or dirt and not all are regularly maintained, making them unsuitable for some automobiles. Roads at high elevations can be impassible due to rockslides and snow. Bull Creek Pass is usually blocked by snowdrifts until late July. The BLM Office at Hanksville can provide current information on road conditions.

Note: I might add that Bull Creek Pass was blocked just a short way from the pass on the eastern side by snowdrifts on 7-5-05. 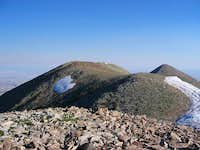 McMillan Spring Campground, administered by the BLM is found five miles west of Bull Creek Pass. There is a 4 dollar charge for any site (may be more in 2015), equipped with table and firepit. One pit toilet services the small campground. Water available.
Season (5/1-11/30), Day Limit (14), # RV Trailer Sites (10), # of Tent Sites (10)

Lonesome Beaver Campground on the east side.
More information can be found HERE

No mountain web cams. This is a very isolated area but you can contact the BLM in Hankville Utah for updates.

Buffalo in the Henry Mountains

A herd of 300-400 animals freeroams in this area but read this article to get a feel for what potential there could be if it wasn't for the BLM policy of allowing cattle grazing in an area that should be marked as wilderness.
The story is HERE

A blurb from Utah.com has this to say:

"The Henry Mountains are the home of the only free-roaming and huntable herd of American bison in the 48 contiguous United States. In 1941, 18 head were transplanted from Yellowstone National Park to the Henry Mountain area. Today over 200 buffalo roam the lower benches of the Henry Mountains in the winter and the higher areas during the summer. Approximately 44 permits to hunt the bison are issued annually by the Utah Division of Wildlife Resources.

Please remember that bison are wild animals. Do not leave your vehicles and chase the herd, as they can become quite dangerous if provoked. If you wish to photograph bison, drive slowly by and take the pictures from your vehicle. "

Scott Surgent almost ran into one as he made his way in his vehicle up to the pass.

A book to buy & odds and ends

If you get serious about spending time in the Henry mountains, consider buying Michael Kelsey's fine book:

Hiking and Exploring Utah's Henry Mountains and Robbers Roost : The Life and Legend of Butch Cassidy (Amazon.com should have it)

All of the peaks are covered as well as a fair description of the roads in the area. Also helpful is topographical maps and a current BLM map of the area. 4 WD and highclearance is helpful as there are many places I wouldn't want to even try and take a passenger car. You might be able to nurse one up to Bull Creek pass but make sure it is a rental.

The best overall information about the Henry's and the history of the area is found HERE I found it a fascinating read.

An interesting article from the Deseret News about the highest peaks in the Utah counties.

As Mt. Ellen is the highest point in all of Garfield County, here are a few tidbits about Garfield County itself:
The 2000 census found that the population was 4,735 which isn't a lot of people. Garfield County was named for James A. Garfield, President of the United States in 1892. Its county seat and largest city is Panguitch

From SLC, one could take I-15 to I-40 then cross over to UT24 to Hanksville, but it is definitely much longer of a trip. US-6 from Spanish Fork to I-40 is four lane for a good portion of the drive to Soldier Summit, and is 65mph the whole way except near Price.

There are plenty of other variations to these too if one wanted to mix it up even more.