At first sight Ostrý Štit / Ostry Szczyt is inconspicuous and your sight goes to its neighbours: Široká Veža / Mały Lodowy Szczyt, Javorový Štit / Jaworowy Szczyt or Prostredný Hrot / Pośrednia Grań. When you look from the north side it seems by L’adový Štit / Lodowy Szczyt on the east and a huge wall of Javorový Štit massif on the west only of a little pyramidal crag in the main ridge of Tatra Mountains. But it is the one of the most precipitous and difficult summits in High Tatra – all routes are available only for climbers (the easiest route has II grade in UIAA scale). For that reason it was the longest conquer summit on the turn of XIX and XX century, when they “discover” Tatar Mountains for tourism. In Zakopane they made book on who reaches the top as the first and was considered as the most difficult in the whole Tatra. 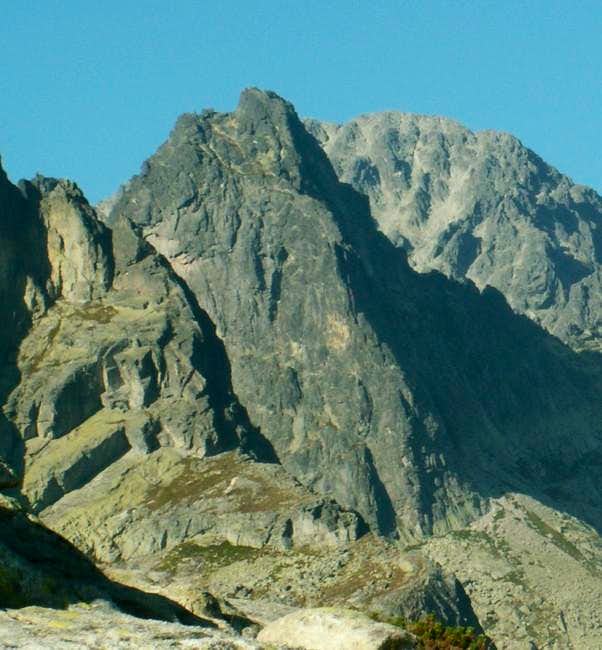 It is a very interesting summit for “average” climbers. It offers plenty of easy routes, from II to V, but you can find here only one route for graduates (“Ostra realita” UIAA VIII-) and with the nearby south wall of Široká Veža makes an eldorado for climbers.

The Slovakian and Polish name means “sharp, pointed summit” and comes from its shape, especially when you look from the east direction.

Antonina Englisch with his son Karol Englisch and guides Johann Hunsdorfer senior and Johann Strompf reached the summit as the first in 1902 year, after a few unsuccessful attempts, by the north wall. This three of them reached already a few another peaks and new routs as the first in Tatra Mountains, too. In winter the first ascend belongs to Alfred Grosz and Gyula Komarnicki (1911) by the east ridge.

Summit view is a little limited in the east direction by Široká Veža and in the west by Javorový Štit. But I think it is interesting, especialy in Prostredný Hrot direction. Have a look youself!

The best point to stars the journey is Zakopane – the biggest town on Polish side of Tatra Mountains. You can get there from Kraków by bus (most recommended), car or train: By bus: there are a lot of buses from Kraków to Zakopane - time table of PKS and private lines Frey and Szwagropol. By train: the road is much longer and dearer than by bus - time table from Kraków 0.00-11.59 a.m., 12.00-11.59 p.m. and from Zakopane. By car: from Kraków take a road number 7 to Chyżne and follow it to Rabka. Here this road turn right to Chyżne, but you follow still straight a head in south direction by road number 95. In Poronin 5 km before Zakopane turn left (east) to border crossing point in Łysa Polana.

From Zakopane: Take a bus to Polana Palenica (time table of PKS, in high season there are a lot of private buses, too – a station is opposite to PKS) and get off in Łysa Polana / Lysá Pol’ana (Attention! private buses sometimes has a direction-board “Morskie Oko”). Cross the polish-slovakian border . Bus station on Slovakian side is about 100m after border crossing point on the right. Take a bus to Poprad, which goes through Starý Smokovec (time table).

Route of rappel from the top by the south wall (on Strelecké Polia / Strzeleckie Pola - the upper part of Vel’ká Studená Valley). 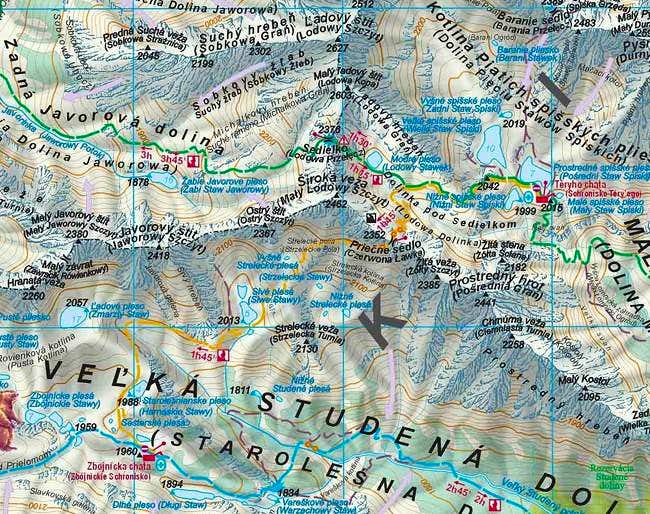 The best time is a summer and early autumn (June - October). But if you like to climbe in winter the best time for you is between jannuary and april.

The “High Tatra” is a National park, UN Bioheritage area and a European BioHeritage - if you are not a member of any climbing club you can move only on marked trails - so you can visit Ostrý Štit only with Tatra guide.

In winter time (from November the 1st – June the 15th) The Tatra Mountains in Slovakian part are closed for normal tourists (not for climbers). In Polish part you can move the whole of year.

Absolutely no camping is permitted in the nature park. The nearest camping in Slovakian side is in Stara Lesna and Tatranska Lomnica.

There are plenty of cheap hotels and pensions in the area of Stary Smokovec and Štrbské Pleso: accommodation

Web forecast: situation at this moment and forecast

Information of avalanche danger: TOPR (in English) and HZS