This page will be kept in honour of Stefan Weber, the SP member known as kletterwebbi, the former owner of this page, died on May 28th 2004 in Southern France at the age of 37.

Piz Glüschaint 3594 m is located in the Bernina Massif on the border between Italy and Switzerland at the closure of the Val Roseg. It's the highest peak of the subgroup Glüschaint-Sella and the Westernmost one. This mountain group limits the left (West) border of the Roseg-basin and Roseg valley. Piz Glüschaint rises above the Vadret da Roseg (Roseg glacier), which is one of the most disrupted glaciers of the alps. The romanic name "Glüschaint" comes from "glühen" (to glow) and "scheinen" (to shine). The mountain is built by three main ridges: SW, NNE and SE. The SW ridge descends to the Forcola Alta giving origin to a fore-summit called Glüschaint Pitschen (Little Glüschaint), the NNE ridge forms a mixed ridge overlooking the Vadret da Roseg, while the brief SE ridge descend to the saddle between Piz Glüschaint and Cima Sondrio. Between this ridges three faces are located: the NE flank, the mixed NW wall, steep but low, and the S face, high and complex, overlooking the italian side with its wide gullies and spurs.

The common route is the NE-flank (rated Alpine PD). There is no real easy route to the summit. Ongoing decline of the glacier may prevent some of the routes in future.

The common place to start an attempt to Piz Glüschaint is the Chamanna Coaz (SAC, 2610 m). The Chamanna Coaz can be reached from the Hotel Roseg at the Val Roseg or from the Fuorcula Surlej.

Note: The Chamanna Coaz is often crowded. Many people know how beautiful the path and the whole region is. So announce your overnight stay at the hut (phone : 082 - 66278). For the S-face start at the Rifugio Marinelli CAI, 2813 m), 4 hours from Campo Moro which will be reached by car from Chiesa in Italy. The Rifugio Marinelli also can be reached from ChamannaCoaz (6 hours) using the Fuorcla Sella or from the Boval hut/Diavolezza crossing the Fuorcla Bellavista (5 hours).

The huge and very crevassed Roseg glacier, with Piz Glüschaint and Piz Sella to the right and Piz Roseg to the left, after a September snowfall partially covering the crevasses

The Vadret da Roseg is one of the most disrupted glaciers of the Alps, so all routes to Piz Glüschaint need a lot of caution. The view from the Chamanna Coaz to the glacier shows the situation. It's a must to study the route at the glacier from the hut, also don't be shy and ask the guardian of the Chamanna Coaz.

From the hut follow a good visible, short path leading to the Vadret Roseg. The first thing is to reach a point at the base of the N-ridge of the Piz Glüschaint (a lot and big crevasses). The possible routes depends on the conditions, a possible one (in 2002) with a big zig-zag can be seen at the routes overview photo. Sometimes it may be possible to reach the base of the N-face more direct.

NNE ridge Alpine AD-, III/45°, 6 hours from Chamanna Coaz The rating for the NNE ridge - former known as a good ice route for beginners - seems to be incorrect (in my opinion). The former easy snowfields are gone. Instead of this my friends and me found a steep (50° or more) ice-field with difficult and even dangerous mixed climbing (we aborted the attempt).

You don't need any permissions and you have not to pay any kind of fees.

There are two campgrounds at Pontresina, one directly at the crossing Pontresina / St. Moritz about 3 km NW of Pontresina. The other one - Camping Plauns - can be found abount 5 km SE of Pontresina below the morteratsch glacier (direction Bernina Pass). To climb the Piz Glüschaint most people will start at the Chamanna Coaz.

Best in early summer, because the conditions of the Vadret da Roseg may turn very bad in late summer.

The N-ridge is also described in the out-of-print-book "Bernina - die 100 schönste Touren", but the description there doesn't match the real situation any longer. 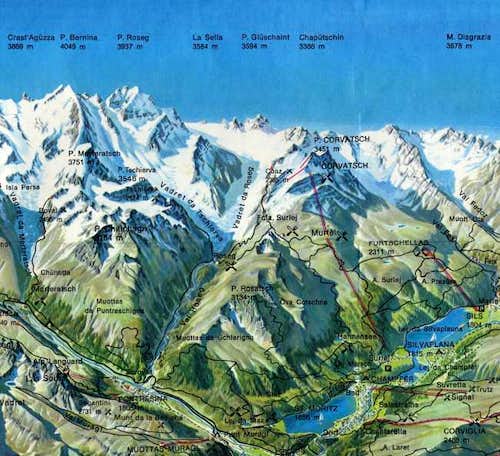 Overview on the Bernina... 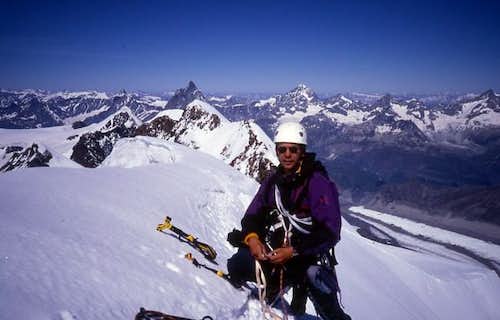 At the summit ridge of the...

A note from the SP staff Stefan Weber, the member we all used to know from his climbing pseudonym  kletterwebbi, died on May 28th 2004 in Southern France at the age of 37.

In the old guide books, southwest arete is rated as UIAA II. In july 2009 I was informed by the guardian of the Coaz hut, that, due to glacier retreat, the passage from the glacier upon the rocks of Fuorcla dal Glüschaint is becoming more and more difficult. In periods with low snow there is now a 40 m high (!!) wall with loose rocks and UIAA grade IV (!) before you get on Fuorcla dal Glüschaint. A fixed belay for rapelling will be installed soon this year (2009) to facilitate the descend.