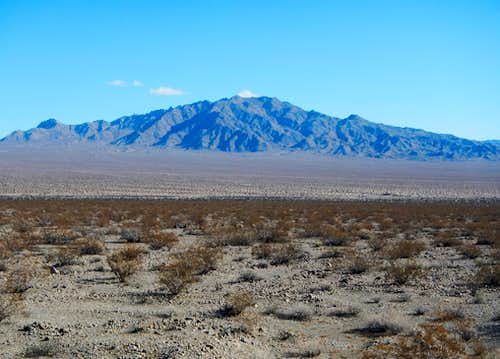 Summit Panorama
The Old Woman Mountains are a metamorphic formation. Granitic rocks, primarily subtypes of granodiorite, crystallized underground as magma intruded older metamorphic rock and cooled slowly. Taking place 99 to 65 million years ago, this formed what is known among geologists as the Fenner Batholith. A batholith is a large subterranean formation of granitic rock, usually harder than the surrounding earth. Often through millions of years of erosion and tectonic forces, a batholith can be forced up or become uncovered through erosion to create a mountain or mountain ranges. Old Woman Mountain is part of the Fenner batholith. 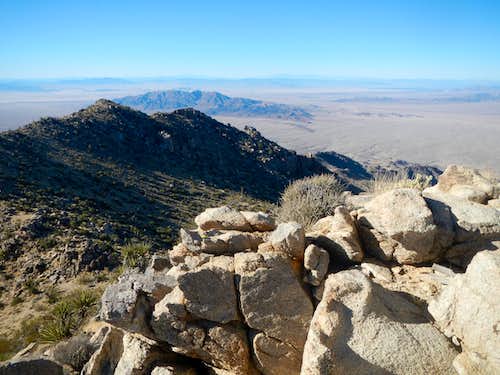 Ship Mountain to the Southwest

In 1994 Congress designated the Old Woman Mountains Wilderness which encompasses 165,172 acres and include Old Woman Mountain. This new wilderness has made the standard approach to the peak slightly longer. Driving access to the area can be difficult since many of the roads are sandy. High clearance and all wheel drive are suggested. The standard route starts near the Florence Mine, north of the peak. An alternate route starts in Carbonate Gulch south of the peak, but that route is not recommended due to long sandy access roads which may be difficult to navigate. 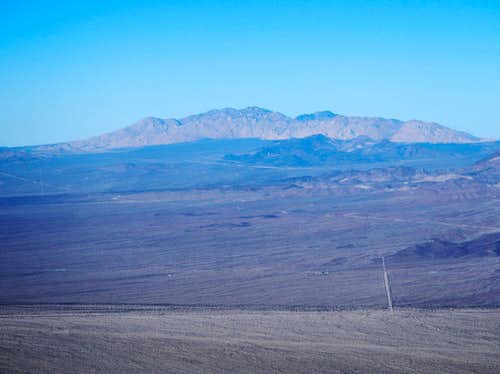 Granite Mountain to the Northwest

Despite the seeming scarcity of water, the Old Woman Mountains are home to a variety of flora and fauna. In fact there are 24 known springs and the animals know where they are. Some of the animal species present include bighorn sheep, mule deer, bobcat, cougar, coyote, jackrabbit, squirrels, kangaroo rats, quail, roadrunners, rattlesnakes, lizards, hawks, falcons, owls, eagles and the endangered desert tortoise. Some of the plant species located here include but are not limited to creosote bush, catclaw acacia, yucca, barrel cactus, cholla cactus, cheesebush, desert lavender, desert almond, pinion pine and juniper. 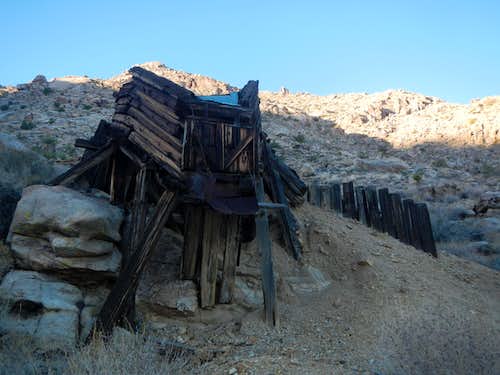 Florence Mine Ruins
The Old Woman Mountains range has a rich history despite its remote location in the Mojave Desert. Like many of the desert ranges, mining of the California Gold Rush era left numerous mining sites all throughout the area. In 1975 the second largest meteorite ever discovered in the US was found 10 miles south of Old Woman Mountain. It weighed 6070 pounds. There is also a significant amount of nearby Native American rock art in the form of petroglyphs. Please see the Old Woman Mountains range page for more information about the meteorite and Native American rock art. 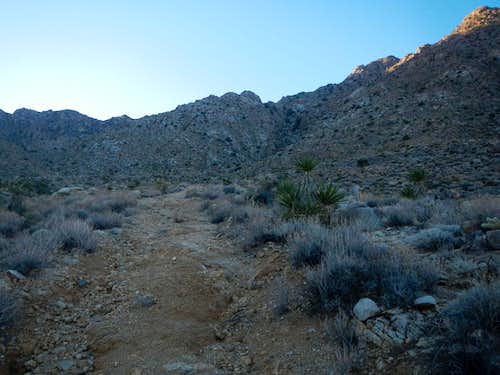 Approach Road Beyond The Gate

Park at the gate and walk the old road remnant southeast until you come to it’s end at the Florence Mine ruins. To the south ascend a steep boulder choked wash. You may have to use your hands here in the process of getting around or over some of the boulders. 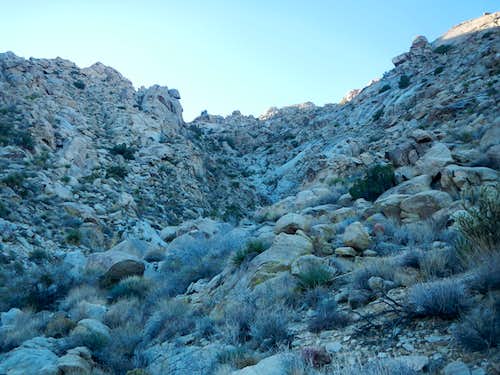 Aim for the saddle west of what the topo map has marked “1268T”. When you reach this saddle, make a slightly descending traverse to enter the bottom of the steep east facing wash, which is east of point “1498T”. 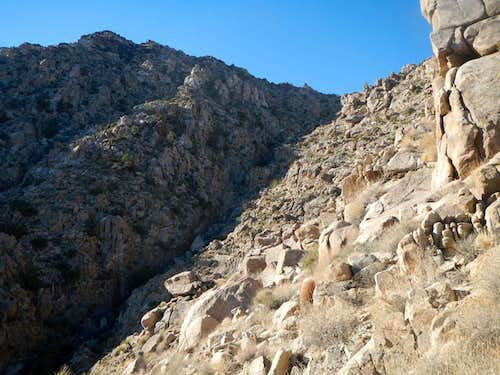 Second Wash
Beware of loose rocks on this traverse. The wash itself is choked with desert brush and has some large boulders which will require class 3 scrambling to navigate past 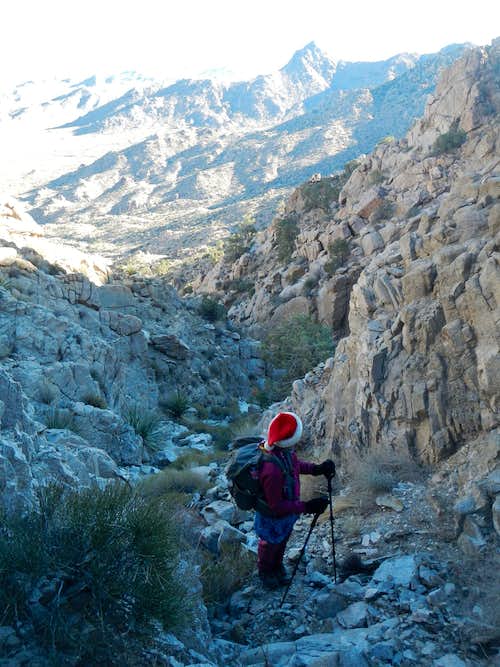 High In The Second Wash
Ascend the second wash southwesterly until you top out in the saddle at 4700 feet, below the north ridge of the main peak. The remainder of the route to the summit along the north ridge is a pleasant hike. Following along the west side of the ridge might be best. There is an old abandoned weather station in ruins right before the summit. 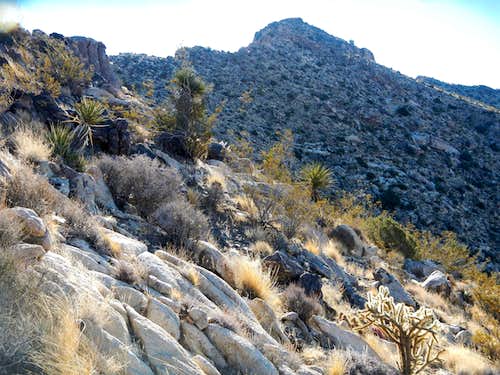 The Summit and North Ridge

The interactive map above can be downloaded as a GPS track log.  See link at the top of the page.  The map below is a printable copy. 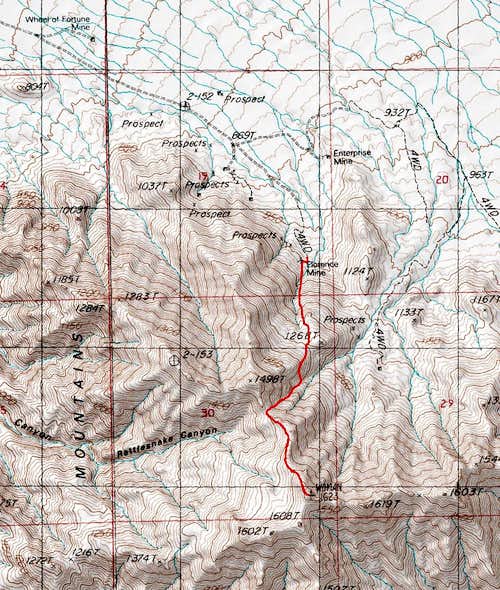 It is suggested that you not attempt to get to this peak in a regular passenger vehicle. Subaru’s and the like are bare minimum to handle the sandy roads. Do not slow down too much or stop or you could potentially get stuck. Trucks and SUV’s are better. It’s a long way away from any development and waiting for help to show up is not a good option. Be prepared and always have extra water along when travelling in these desert environs.

From Needles, CA
Go west on Interstate 40 for 26.2 miles and take exit 115 for Mountain Springs Road. Turn left on Mountain Springs Road which turns into National Trails Highway / Old Route 66. Watch for eroded potholes on the Old Route 66. Continue southwest for 22.4 miles to the Danby Road turnoff located at (34.648862, -115.370573). Turn left (southeast) and continue for another 7 miles to the gate. The first 2 miles of Danby Road, before the railroad track are not bad. Beyond the railroad tracks, drive carefully and beware of loose sand. 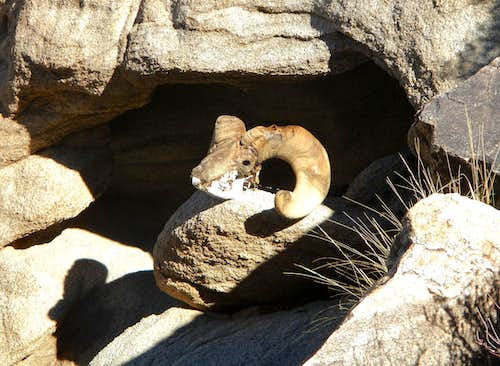 Sheep Skull
From Barstow, CA
Go East on Interstate 40 for 47.2 miles and take exit 50 toward Ludlow. Turn right and then immediately left onto National Trails Highway / Old Route 66. Continue east on the Old Route 66 for 51.7 miles and watch for eroded potholes in the black top. Turn right onto Danby Road, located at (34.648862, -115.370573) and continue for another 7 miles to the gate. The first 2 miles of Danby Road, before the railroad track are not bad. Beyond the railroad tracks, drive carefully and beware of loose sand.