These two peaks reside in Colorado's central Sawatch range just east of Independence Pass and the Continental Divide and are usually climbed together. They are tucked behind some of the highest peaks in the state and are not easily visible from the Arkansas Valley to the east. This position does result in one benefit, spectacular summit views! The highest peaks in the Sawatch as well as the entire Elk Range to the west are on full display from their summits. The surrounding North Fork Lake Creek Basin to their west is a spectacular place and popular with day hikers. The lush meadows are rich in wildflowers and the rugged ridge lines that surround the north end of the basin will surprise you. With their easy access from Colorado 82, these peaks offer a great day trip outing from Denver or nearby mountain communities like Leadville and Aspen. The Independence Pass area is also spectacular for viewing the fall colors. 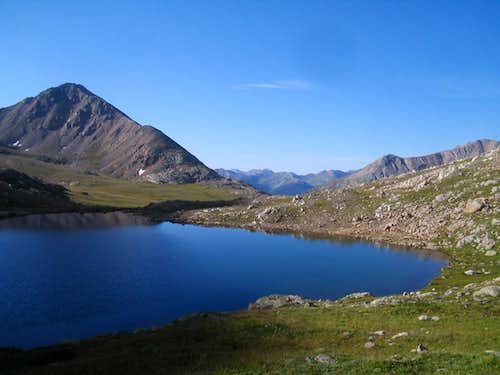 These peaks are prominently displayed when descending the east side of Independence Pass along Colorado 82, however, this is not their best vantage point. They are best viewed from neighboring peaks such as Twining Peak and Deer Mountain. As a result of their ho-hum appearance from the road, these peaks do not see as much traffic as their higher neighbors. They are mainly popular with those climbers working on the "Bi-Centennial Thirteeners" as they are both among Colorado's 200 highest peaks. PT 13736 is the state's 133rd highest summit and Mount Champion (13,646') is the 173rd. The ridge between them is just over 1/2 a mile and drops to a low point of 13,340'.

Mount Champion is named for the mine that is located on its southern slopes. This mine was first active in the 1890's and was the richest gold mine in the immediate area in its prime. The mine was connected by an aerial tramway over a mile long to a mill in the Halfmoon Creek drainage to the northeast. The mill and parts of the tramway are in good shape still today, and are on the National Historic Register (source USFS) 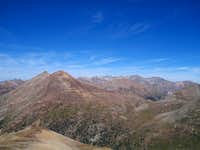 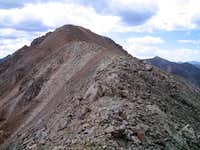 Most recently people may recognize the name of Mount Champion from a popular United States reality television show called "The Real World" which airs on MTV. The show's 18th season was filmed in Denver and the cast led a group of teens up the mountain while working for Outward Bound.

This trailhead is the most popular way to access these two peaks. From the junction of Colorado 82 and Hwy 24, go 19 miles west to the first major switchback before the road ascends to Independence Pass. Just below this switchback there is a dirt parking area for about a dozen cars on the right. This trailhead is about 2.2 miles above the winter road closure.

Other peaks that can be accessed from this trailhead include "Lackawanna Peak", Deer Mountain and Casco Peak. 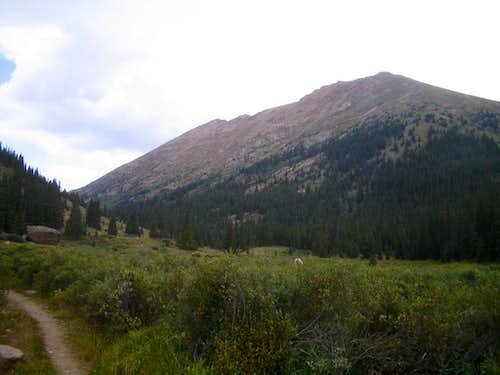 Alternately these peaks can be accessed from the northeast via Halfmoon Creek. Follow US 24 for approximately 3 1/2 miles south of downtown Leadville to Colorado 300. Continue west for 3/4 mile and turn left on Lake County 11. Follow a signed junction for the Halfmoon Campground onto FS 110. This road is access the main trailheads for Mount Elbert and Mount Massive. Most vehicles can continue for an additional 2 miles beyond the Mount Massive trailhead before the road gets too rough. 4WD vehicles can carefully continue another 1/2 mile to reach the signed trailhead at a large stream crossing.

Other peaks that can be accessed from this trailhead include Mount Massive and Mount Oklahoma. 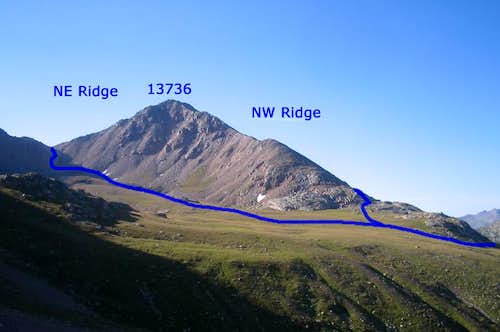 Hike north from the parking area along the North Fork trail for approximately two miles to 11,600'. Leave the trail and head up a second drainage to the base of the ridge. There may be some pockets of class 2+ or low 3 scrambling required.

Hike north from the parking area along the North Fork trail for approximately two miles to 11,600'. Leave the trail and head up a second drainage, past a small tarn to a talus headwall. Ascend climbers trail to the 13,060' saddle with Deer Mountain and climb the ridge crest. This saddle can also be reached from the Halfmoon Trailhead. The ridge crest has some minor class 2+ scrambling and can be loose in places. 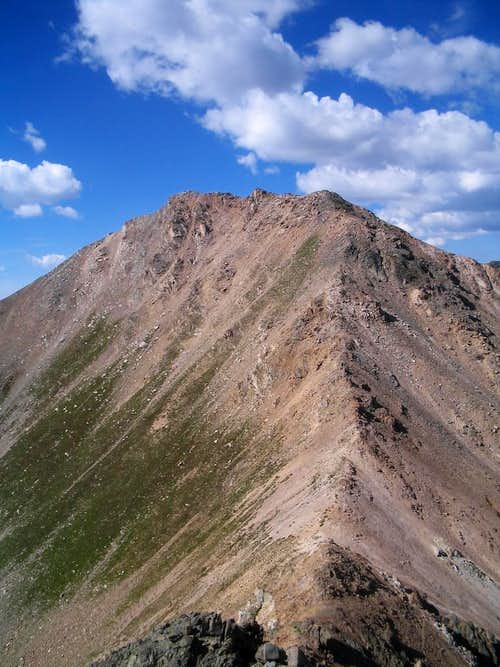 Hike north from the parking area and contour below the south face of Mt Champion on an old grass covered road. Cross Lake Creek (difficult in high water) and head up the drainage towards Lackawanna Gulch. Head up a small drainage that splits to the left and up to a saddle at 12,400' near the tramline. This saddle can also be reached from the Halfmoon Trailhead via an old mining road. Follow the ridge to the summit.

There may be a reasonable way to climb the south slopes of Mount Champion as well, the slopes above treeline appear to be class 2 grass and talus, but there may be some steeper terrain with possible rock outcroppings in the trees below.

I do not recommend climbing or descending via the West Slopes. The lower sections are covered in thick willows, the middle is strewn with rock and cliff bands, and the upper part is loose scree that feels like hiking on a sand dune. I used this as a descent route from Mt Champion and found myself downclimbing class 3 and 4 rock bands to avoid the loose scree and nearly cliffed myself out at the base to avoid the willows. The terrain closer to the 13736-Champion saddle seems more reasonable, but is probably still loose. 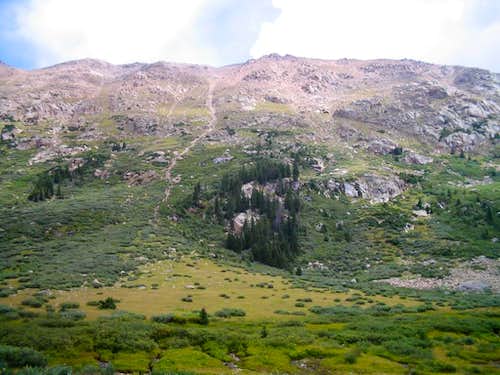 Independence Pass is closed annually during the winter months. Typically the closure runs late October/early November to Memorial Day. The road is closed approximately 2.2 miles below the North Lake Creek Trailhead. Current status on Independence Pass can be found at CDOT's website.

The Mount Massive Wilderness Area runs through this area. The summit of PT 13736 and the routes on its north side are within the wilderness areas, Mt Champion is not. No motorized or mechanized is travel is allowed in wilderness areas. A self-service backcountry permit is required for each group. These are free and can be filled out by the groups leader at the kiosk at the trailhead. The permits are two-part, fill them out and tear the white copy from the top and put in the box, then attach the tag to your pack.

There are several campgrounds located along Colorado 82 both to the east and west of Independence Pass. Any of the ones I have been to require a nominal fee, as much as $14, per night. For "free" camping options, there are some pullouts along the FS 391 road to the south of the LaPlata Peak trailhead. Please note the first mile plus of this road is on private property, do not camp until south of this area.

If you are looking for indoor accommodations there are a few bed and breakfast type inns near Twin Lakes and some hotels and a hostel in Leadville.

Click here to view a 7-day forecast for the immediate area.

The area is prone to high avalanche danger in the winter, for the latest forecasts check out the Colorado Avalanche Information Center's website: CAIC Forecast for Sawatch Range

See below for an annotated map of the surrounding area 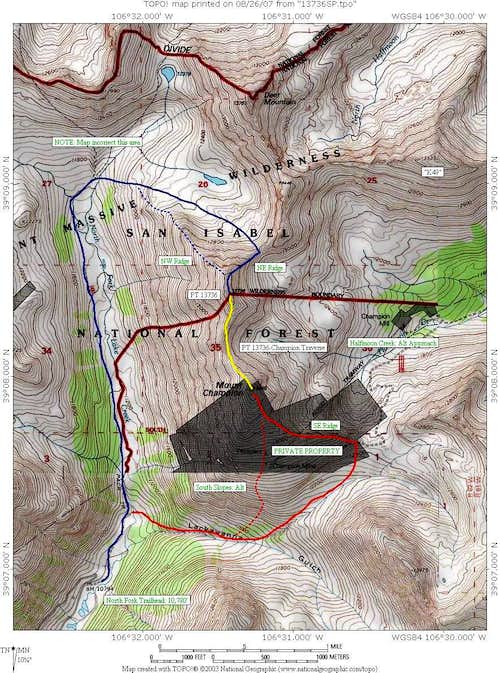