Punta Lunarda is without any doubt the top rocky jewel in the Bavella Massif, showing magnificent and vertical faces with extra-solid and compact orange granite; this mighty bicuspidated peak, a true summit without no weak point, both for its steepness and its secluded situation is not very often climbed. The tower rises close to Punta di a’ Muvra, between Lunarda Canyon and Purcaraccia Canyon, overlooking with its unmistakable shape Bocca di Larone from the right-hand side of the road D268, when following it from Solenzara towards Col de Bavella.

Altough this cliff draws unfailingly every climber’s eye, its routes are not crowded by plenty of parties: as a matter of fact the whole of approach, descent and climbing – even choosing the less difficult route, “Anima Corsa”, the first one realized – represents even for an experienced climber an engaged experience. Due to its steepness, Lunarda climbing way is often rough and very different from the nearby crag of Teghie Lisce. Here we can’t make any adherence performances and the routes mainly follow cracks and chimney-cracks.
Maybe the name “Lunarda” would mean the peak is so fascinating that it’s possible it was arisen by a huge stone fallen down from the moon (“luna”).

The magnificent island of Corsica, l'Ile de Beauté (the Island of Beauty) belonging to France but much closer to Italy, can be easily approached by plane (airports both in Bastia on the Eastern coast and Ajaccio on the Western coast) and by ferry-boat from Livorno and Savona italian ports. The most convenient destination in Corsica to visit the Bavella area, one of the wildest region of the island, is the airport of Bastia if you’re getting there by plane; the same Bastia port if you’re getting there by ferry-boat.

- From Bastia (Corsica Eastern coast) along RN 198 to Solenzara; less then 1 km. before Solenzara turn to right and follow D268 to Bavella Pass (km. 130 from Bastia).

- From Aiaccio (Corsica Western coast) along RN 196 to Petreto, then along N852 to Aullene, Quenza and Zonza (km. 90 from Aiaccio). From Zonza follow D268 to Col de Bavella.

GETTING THERE FROM COL DE BAVELLA (ROUTES A-F)

Follow D268 down along NE side towards Solenzara. Cross Renaju Bridge and Polischellu Bridge and reach the place named Arghjavara. 30 mt. before Purcaraccia Bridge, inside a bend, find on your left-hand side a chestnut tree, where approach track is starting.

GETTING THERE FROM COL DE BAVELLA (ROUTES G-H)

From the chestnut-tree take a trail running along a water pipeline – stones’ pyramids – then running towards right along the base of Punta d’Arghjavara. Reach Lunarda Canyon and cross it, rising along its orographical left bank for about 15 minutes. At a fork leave another track on your right-hand side and carry on straight towards the slabs which bar the walk. Climb the slabs on their left-hand side, reaching a terrace. Towards right climb the third skirting leading to “Anima Corsa” cracks-system (1 and a half hour from the parking).

From Bocca di Larone parking get back a bit along D268 to reach in West side of the pass the first great hairpin. Inside the hairpin a mainly level trail starts getting into a dense vegetation and skirting Purcaraccia’ great canyon. After half an hour the trail goes down to reach the stream. Cross the river gaining the opposite bank; after the ford rise immediately up along the steep vegetated slope along a trail not very obvious – several stones’ pyramids. After 15 minutes the trail goes towards left along some slopes, reaching the great vegetated gully of Punta Malanda. Don’t climb the gully but traverse towards left running along the base of Punta de l’Arca slabs. From here some stones’ pyramids towards left leads to the starting point of the route “La Face cacheè de la Lune”. Go down, running along the face to reach “ Amicizia” starting slabs (1 hour and 45 minutes). 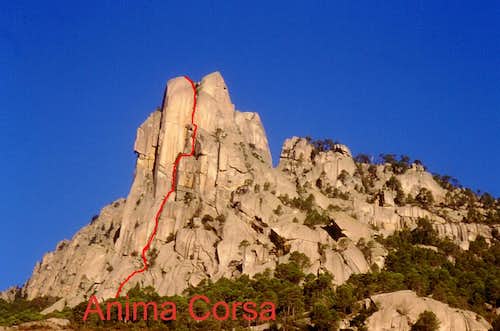 The first route realized – without pitons - over the impressive monolithe. Sustained climb on 6a-6b along cracks and chimney-cracks. For its rough climbing’s way the route was defined as “a granite Luna Bong”.

Descent: from the top reach a rocky saddle situated North-West to the summit. With four abseils along SW side reach Lunarda Canyon. Go down towards East along the canyon – ometti - reaching the approach trail.

Bavella nature is wild and peculiar; vertiginous granite’s cathedrals rise from impenetrable and secluded valleys, showing impressive faces and unique shapes. Often climbers must fight against the tangled mediterranean vegetation to get to the cliffs. Bavella it’s really the kingdom of wild boar. In Corsica island we can find more than 5% of authoctonous kinds of flower and plants, in addition to authoctonous fauna. On the contrary, several kinds of animal current inside Mediterranean countries are away from Corsica, like squirrels and vipers.

Climate is the typical one of the mediterranean middle-mountain areas situated at these latitudes: often very hot in summer and with cold and snowy winters; early and middle Spring and early Fall are the better seasons to climb. Due to Bavella closeness to the sea, winds are often stronger how much they are at the same height in the Alps. Rainfall sometimes are important and dangerous when joined with strong winds. On the contrary, sometimes we can try some long periods of drought, especially during late Spring and Summer.

Bavella is really a fantastic world, a preserved milieu situated inside a Regional Park Parc Naturel Régional de Corse - Parcu di Corsica. Free camping and bivouac are not allowed. Fires are strictly forbidden. Maximum care is required to keep for the future this extraordinary environment.

Best seasons to climb Punta Lunarda are Spring and Fall 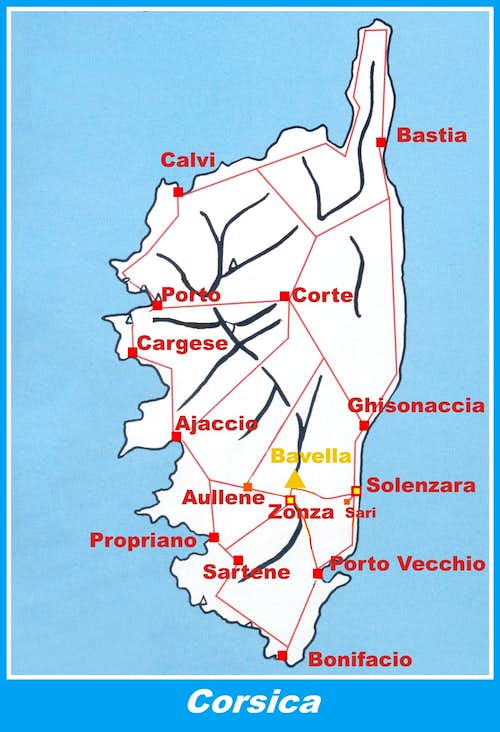