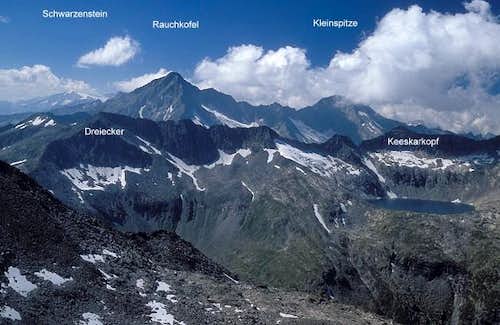 Overview
Rauchkofel/Monte Fumo means something like “Hill in the Smoke”. This refers to the observation that the peak is often in clouds when all the other peaks and ridges around are still in sunshine. In Italy there are several peaks called Monte Fumo. In order to distinguish this one from the others with similar name, it’s also called Monte Fumo di Predoi.

The name Rauchkofel is also written as Rauhkofel in some resources.

The tour to Rauchkofel is not too difficult for people with good physical condition. There are no technical difficulties. Most of the route is well-marked tourist path. Only the last 1 km long section becomes a bit harder: here the elevation gain is 500 meter on 1000 m horizontal progress. The route cannot be said as a path any more, because the marked way leads on boulders with diameter between 1-3 meter. You must constantly scramble up these boulders in order to reach the peak. And the it’s not easy to follow the marks, especially in clouds. But there are no via ferrata sections and no real exposures, so technically it’s not difficult and not dangerous.

Whichever route you chose to Rauchkofel, you will have to start your route from south, from Ahrntal. And it gives you the possibility to experience the change of vegetation as you get higher and higher. From the bottom of the valley (approximately 1500 m) to the elevation of 1950 m you will walk through pine trees. From 1950 m till 2700 m elevation the hillside is grassy. And above 2700 meter there is no vegetation any more, just the bare rocks. The building material of this mountain is phyllite with occasional quartz layers. When you are up on the peak, you can see that there are not only bare rocks here, but also a glacier north to the peak at the Austrian side of the border, called Rauchkofelkees. 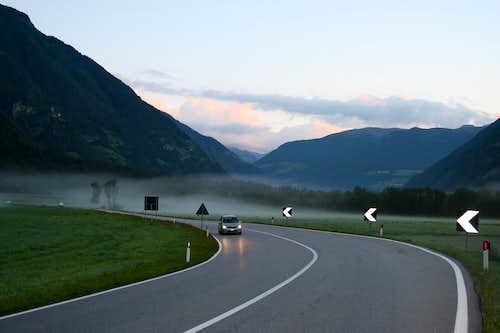 Early morning drive in Ahrntal to Kasern to the trailhead of Rauhkofel
Coming from Brenner-pass
Brixen/Bressanone highway exit – in the direction up in Pustertal/Val Pusteria until Bruneck/Brunico. At Brunico turn north and drive along Ahrntal/Valle Aurina until Prettau/Predoi or Kasern/Casere. Prettau and Kaser are the last villages in Ahrtal, so you cannot be lost.

Coming from East-Tirol, Austria
If you come from the direction of Lienz and Innichen (or from the Tauern-highway) you arrive into Bruneck/Brunico from eastern direction. Turn right (to north) at Bruneck and drive along Ahrntal/Valle Aurina until Prettau/Predoi or Kasern/Casere. 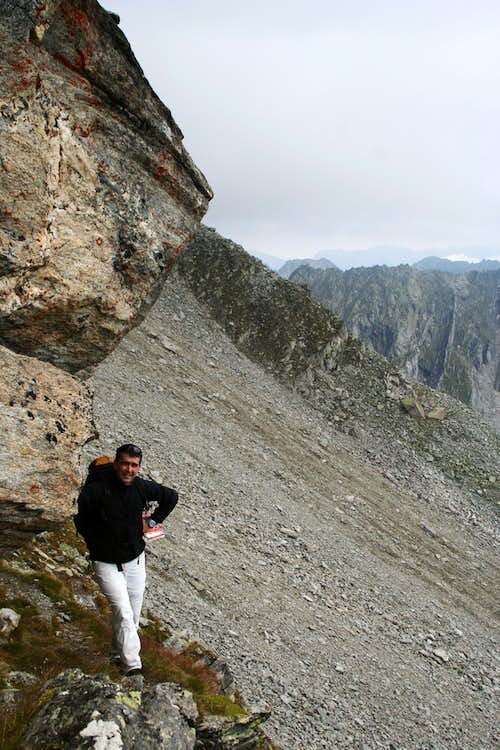 Trail below an overhanging rock
From Prettau

From Prettau (1476 m) we follow the forest road that is closed for public traffic. It is a comfortable way up to Wieser Alm (m 1989) and not steep at all. If you find the traverse path 16B, then you can abbreviate your route with two hours. From Wieser Alm we follow the last short section of the 4 x 4 road, crossing the stream Wieser Bach/Rio Prato and we arrive to Waldner Alm/Malga della Selva (2063 m) – a hut opened in the summer season. We continue on an easy path crossing meadows and leading up to the picturesque Waldner See/Lago della Selva (2338 m). It’s a 45 minutes walk from Wiesener Alm. From the lake we walk to eastern direction.

After 1 km we turn left (north) up to the hillside. Not easy to find this junction of paths, it’s not very well marked. On this path in 20 minutes we ascend to approximately 2600 meter where we meet the tourist path called Lausitzer Weg. While doing this section of the route, we pass by a smaller but well-shaped peak called Sauwipfel (2657 m) that stands left to the trail. Near the ruins of an old building (it was the Rauchkofel Hut). So when we arrive to the Lausitzer Weg, we turn left, following the wooden sign showing to the direction of Hundskeljöch and Rauhkofel. We go only a few dozens of steps in this direction. The more serious part of the ascend starts here, after turning right up to the southern ridge of Rauhkofel. The path is marked well here. The path leads up in zig-zag and we can gain the elevation very quickly. The panoramic view is better and better with the view of Waldner See.

At elevation of 2976 m we can choose between two possibilities. The marked path goes left to the ridge, in the hillside, on huge rocks and boulders. The quality of the marked way is not changed up to the peak. The orientation is helped not only by the marks but also by the cross on the top of the peak – 3251 m. Approximately 3.5 hours from Wieser Alm or 5.3 hours from Prettau.

This path doesn’t make any problem if there is no snow coverage. In snowy conditions it should be considered to follow the ridge from elevation 2976 m. It has an exposure of 1st grade.

In the village Kasern it’s not possible to find a parking place – all parking places are private areas. Nevertheless there is a parking place left to the road at the end of the village. A few Euro fee must be paid there for a day stay. From Kasern you can start your ascend on the path No.15. Not easy to find the trainhead. The trailhead itself is not marked and it’s just between two houses.

After a hundred meter walk beside a meadow we enter the pine forest. The path quickly ascends in a zig-zag, and by the time we get out of the forest zone, we are already on 2000 meter elevation where we meat a 4 x 4 road. Let’s turn left on the road and immediately we are at the Hochwieser Alm. Behind the Hochwieser Alm we can start our ascend on the path 15A. We go along the Markstein-Bach. This steam has fantastic meander formations that can be very rarely seen in such a perfectly shaped form! Soon we pass by the Marchsteinhütte, and we ascend up the a pass being on elevation of 2369 m. South to the pass there is the minor peak called Archbichl (2414 m). After the pass we continue to west, for 1 km. The elevation loss is minimal here, despite of the pass we just passed. After 1 km we arrive to the same path the was already described for the other route. Not easy to find this junction of paths, it’s not very well marked. On this path in 20 minutes we ascend to approximately 2600 meter where we meet the tourist path called Lausitzer Weg. From here follow the description of the other route. 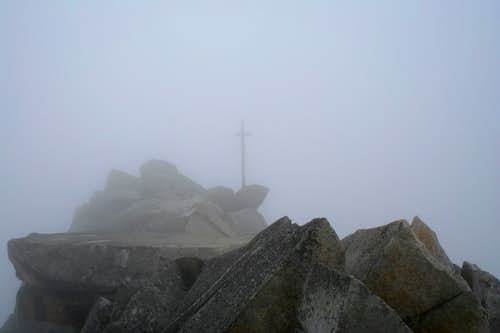 The peak in clouds

- In the first half of the summer there are still snow-covered areas here, especially near the peak. The marks cannot be seen in these conditions, and without marking it’s very difficult to find the right way between the huge rocks and boulders.
- The peak is very often in clouds and the visibility can be very bad
- There are deep gaps between the boulders covering the hillside, and the mountaineer who is not enough cautious can get into trouble on the slippery rocks

No limitation.
No permission is needed.
Not in Natural Park. 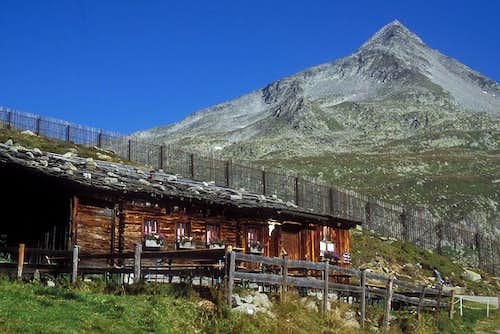 The nearest camping is a few km west to Bruneck/Brunico, in the village St. Lorenzen/San orenzo di Sebato.

Here you find general information about accomodations in Ahrntal/Valle Aurina. 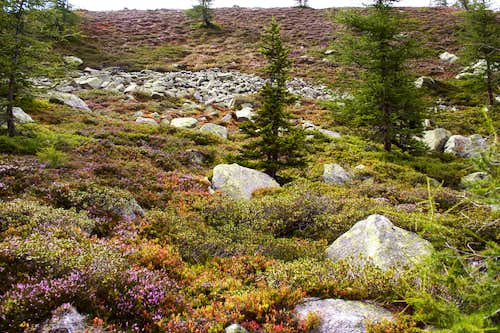