What's New on this Page? 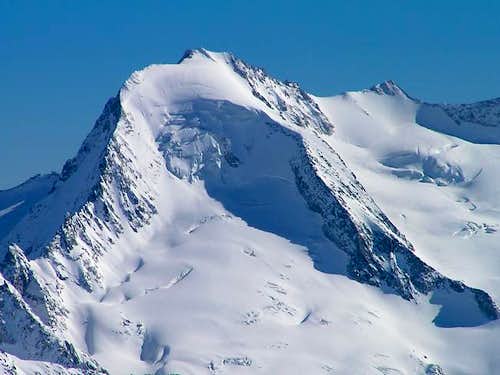 Gran Mesule - Großer Möseler is an Italian-Austrian border peak in the Alpi Aurine/ Zillertal Alps. More precisely, to the north is Austria, to the south the autonomous Italian region of Süd Tirol (which translates to English as South Tyrol). As all the mountains located near the boundaries between Italy and Austria, this peak has two names: Gran Mesule, the italian name, and Großer Möseler, the original tyrolese place-name. 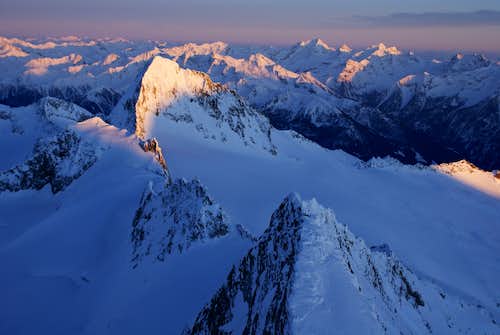 Summit view, with the E ridge in the foreground, but Turnerkamp grabbing all the attention 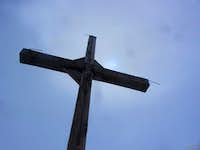 Four ridges meet virtually on the summit, roughly along the four cardinal directions. The ridges themselves are predominantly rocky, with some snow. On the Austrian side, the upper slopes between the ridges are mostly glaciated, on the Italian side the glaciers are small.

To the east, after about 400 m the ridge reaches the subsidiary summit of the Kleiner Möseler (3405m), and almost a kilometer from the main summit the Östlicher Möselescharte (3240m) ("Östlich" means eastern, a "Scharte" is a small saddle). Further to the east, the next significant mountain on the ridge is the Turnerkamp (3420m), about a kilometer and a half from the scharte. 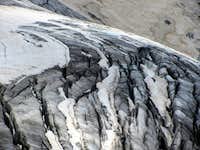 A closer view of the crevasses on the Östlicher Nevesferner

To the south, the ridge first drops down to the Westlicher Möselescharte (3370m) and then gently rises again to the Möselekopf (3390m), a minor bump half a kilometer from the main summit that is nevertheless graced with its own summit cross. At that point the ridge splits in a southern and a southwestern branch. After a few more turns, the latter eventually leads to the Hoher Weißzint (3371m), and after that to the aforementioned Hochfeiler. The lowest point in between is the Nevessattel (3025m), between Möseler and Weißzint, giving the mountain a prominence of 455 m.

The international border is defined by the east and south ridges, and from the Möselekopf further by the southwest ridge.

Located completely in Italy, from the Möselekopf, the area between the south and southwest ridges hosts the small Westlicher Nevesferner ("Ferner", like "Kees", is a local German word for glacier). Also in Italy, the larger Östlicher Nevesferner covers a substantial part of the high area east by southeast of the mountain, on the south side of the east ridge, all the way to the Turnerkamp. However, the glacier doesn't cover part of the area east of the south ridge anymore.

The west and north ridges are both in Austria. More precisely, the west ridge is to the WNW and the north one soon turns to the NNW, leaving a steep NW face wedged between them. This face is covered by the Furtschaglkees, the much wider one between the west and south ridges by the Schlegeiskees. Finally, between the north and east ridges lies the big and crevassed Waxeggkees.

The first ascent was made by Fox, Freshfield, Tuckett, Devouassoud and Peter Michel in 1865 [1].

The nearest train station is in Bruneck / Brunico, a small city in the Val Pusteria with a lively and scenic old center. Plenty of buses head north towards the Ahrntal and Mühlwalder Tal.

The highest and most convenient trailhead is at the Neveser Stausee (1856m), just above the village of Lappach at the end of the Mühlwalder Tal (1439m), which is as far as you can get by bus. With private transport you can drive up to the lake (the last part is a toll road). Alternatively you can leave your car at the parking area right before the toll booth and walk the last part. I recommend using the hiking trail in the valley, well below the small toll road hugging the slopes - all the cars passing by do not make that a pleasant experience. From the lake it's a couple of hours to one of two Italian mountain huts: the rustic Edelrauthütte-Rifugio Ponte di Ghiaccio, located on the Eisbruchjoch, a saddle south of the Hoher Weißzint, or the Chemnitzer Hütte, on the Neveser Joch, a saddle south of the Turnerkamp.

The nearest airport is at Innsbruck, the capital of Tirol. The nearest train station in Mayrhofen, a ski village deep in the Zillertal. The trailhead for the normal route is at the Schlegeisstausee, a big, dammed lake, which and can be reached from Mayrhofen by bus or by car using the Schlegeis Alpine Road. The last part of this is a toll road, and it is open only part of the year. Shortly before the toll barrier, at Gasthof Breitlahner (1356m), would be an alternative trailhead.

From the Schlegeissstausee, it's a couple of hours to the Furtschaglhaus, the recommended place to spend the night before the climb.

From Gasthof Breitlahner there are two options: To the Furtschaglhaus, hike to the Schlegeleisstaussee and onwards; alternatively hike up the Zemmgrund valley to the Berliner Hütte. 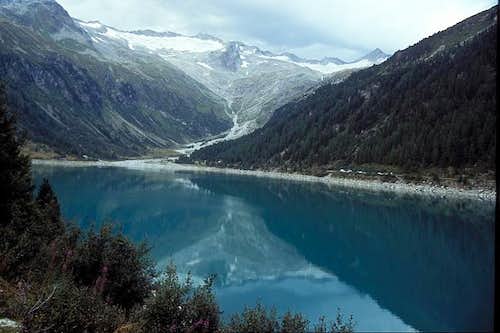 The mountain is climbed from both countries regularly. With much more serious glaciers on the northern slopes, it won't come as a surprise that the easiest way to the summit is from the south, where the normal route does not cross a glacier.

The approach starts at the Neves Stausee, usually via by Rifugio Porro (Chemnitzer Hütte) and from there along the clearly signposted and popular Neveser Höhenweg. 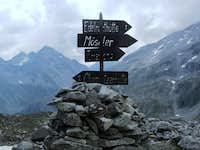 Signs along the Neveser Höhenweg 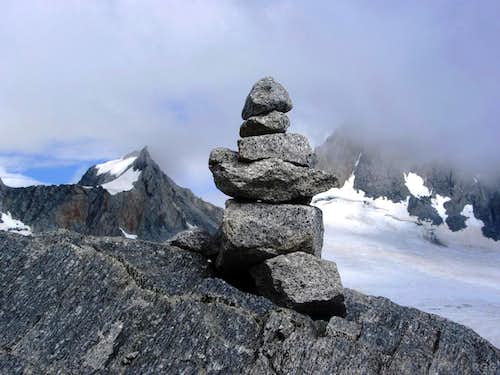 One of many cairns along the route

About an hour from the hut it is time to leave the big hiking trail. With decent visibility you can clearly see the summit; if you can't, ask yourself why you would want to continue. 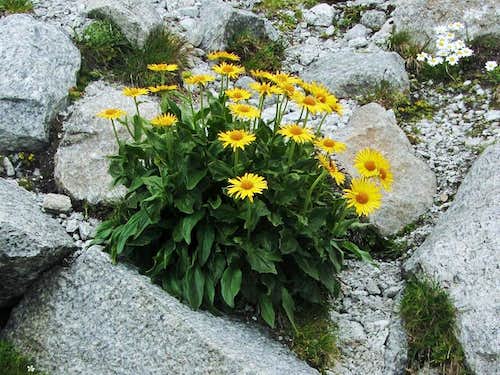 When the glaciers disappear, pioneers like this Doronicum take over

After leaving the trail, the route fist ascends a big lateral moraine, leading to a fairly level area that until quite recently was still covered by the glacier. The terrain is a mix of slabs, talus and more sandy bits, and there are plenty of cairns. Up the talus and in the sand there are often clear trails - in fact there are several to chose from at first, but in the end they all come together on top of the moraine. It's mostly the same higher up, with slabs, talus and sandy bits, and more cairns. But even when they are all covered by snow, route finding isn't difficult: just aim for the saddle (3373m) with the Kleiner Möseler, just east of the summit.

When there is enough snow, it's possible to ski down from the summit directly to the Neveser Stausee. High up, the route stays close to the south ridge, lower down it follows the Ursprungbach.

Looking up at the summit from the southeast, high up on the normal route. On the right is the saddle with the Kleiner Möseler. Crampons and ice axe may be useful to get up there in conditions like these. As highlighted by the debris on the snow, the rocks are far from solid, and rockfall is a hazard to be reckoned with.

Though the terrain is never truly steep, the steepest part is right before the saddle, where a short talus slope has to be climbed. After that, the route mostly follows the east ridge. Occasionally it is easier to stay a bit below the crest, on the south side. I simply followed the obvious traces where others had gone before. Real high up I actually found it easier to traverse the southeast face, and I ended up on the south ridge just shy of the summit. However, the rock is crumbly and rockfall can be a hazard if there are more people around, in which case following the ridge is safer than traversing below it.

While there is no need to cross any glacier, lingering snow high on the mountain can make crampons and ice axe useful, especially to get on the saddle.

The Neveser Höhenweg leads to the Edelrauthütte, and so the Großer Möseler can be climbed from there as well, but the approach takes two hours more than from the Chemnitzer Hütte. 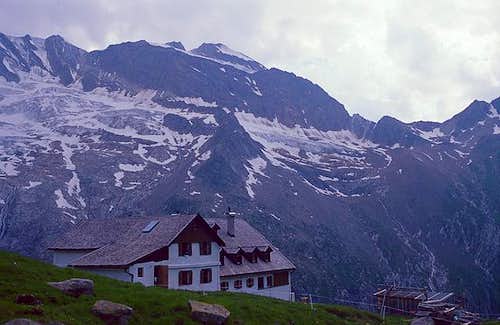 The regularly climbed Austrian normal route starts at the Furtschlaglhaus and leads to the summit via the WNW ridge, the base of which is gained from the west by crossing the Schlegeiskees. Full glacier gear and roping up is strongly advisable.

There are many other routes of varying difficulty. A harder, interesting route follows the steep northwest face, see the photo above. 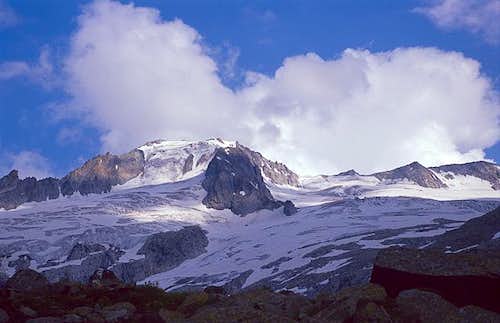 Großer Möseler seen from the Furtschaglhaus.The north ridge is on the left, the WNW ridge in the center.

The high mountains of the Zillertal Alps form a natural park, see Naturpark Zillertal and Zillertaler Alpen, but there are no fees and no special restrictions.

Best in summer for mountaineering, in spring for skiing.

On both sides of the border, the villages in the valleys offer plenty of accommodation options. Higher up in the mountains there are several conveniently located refuges:

Furtschaglhaus, the usual starting point for the Austrian normal route

Situation: Schwarzensteinalm in the upper Zemmgrund
Owner: DAV Sektion Berlin
Guardian: Rupert Bürgler
Open: 15 of June - 30 of September
Size: 177 persons + 14 in the winter-shelter
Email: berlinerhuette@aon.at
Hut's phone: 0043 676 7051473
Getting There: from Gasthof Breitlahner in Ginzling in 3-4 hours 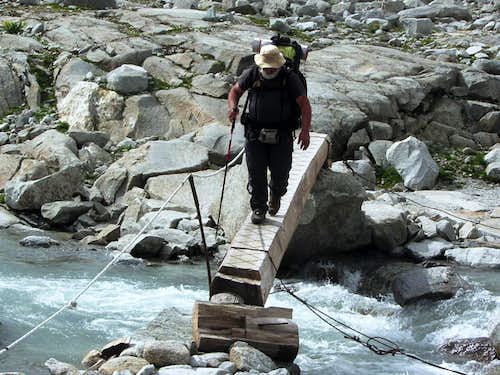 Crossing a stream on the Neveser Höhenweg

There are many available maps for the area. The best one is the Alpenvereinskarte Zillertaler Alpen West, 1:25 000, but it does not cover much of the Italian side.

The various Italian maps that I saw (in 2014) were decent, but they all shared a common problem: they showed the old trajectory of the Neveser Höhenweg, which was destroyed by a landslide in 2010. The reconstructed trail is quite obvious though, so even without a map it's easy to follow. That said, the best Italian map is Tabacco map 36, Sand in Taufers / Campo Tures, 1:25 000.