The Gran Pilastro (Italian: Gran Pilastro; German: Hochfeiler) is the highest mountain in the Zillertal Alps on the border between Tyrol, Austria, and South Tyrol, Italy. 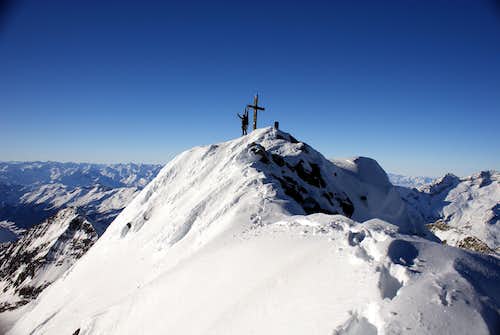 The first ascent as made from Peter Fuchs, Paul Grohmann and Georg Samer "Josele" on July, 24th 1865 , just 10 days after the firs ascent of Matterhorn. 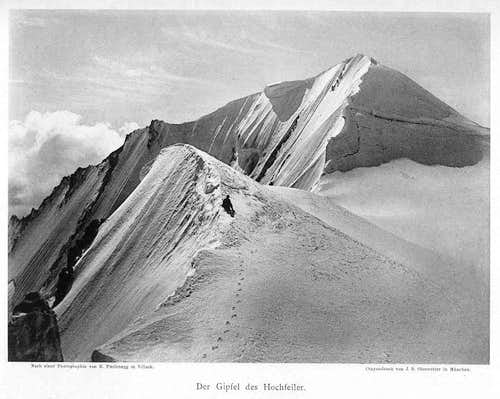 Hochfeiler from a picture of 1890
The traditional name of the mountain, still in 1700 was Hoch Feil Spiz and was probably referred to a nearby area, the Fäule (dialect  Faile) that means  "swampy land".  The Italian name was created by Ettore Tolomei after the WWI and probably confused the name  "-feiler" with "Pfeiler"  that means Pillar (Pilastro in Italian).

From the north, over the Brenner/Brennero pass down the highway for Bolzano/Bozen, exit Vipiteno/Sterzing and drive for Val di Vizze /Pfitscher Tal.
Go up on the valley toward the Passo di Vizze/ Pfitscher Joch and after Sasso, the road starts bending. Stop at the third switchback (1718 m.) and on the right starts the path n. 1 to the Gran Pilastro Hut /Hochfeiler Hutte


From the South, drive Bolzano/Bozen till Vipiteno/Sterzing exit, further same as described above 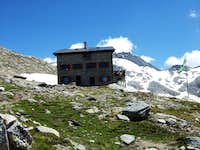 Rifugio Gran Pilastro
located in a beautifull panoramic position on a small terrace, over the Glideferner glacier.
Opened in 1986 from the Sterzing section of the AVS, it offers 90 beds.

Open from mid June to the end of September, with winter room with 6 beds.

Gunther Messner biwack
Located at 2429 m. at the base of Griessferner and Hocferner steep walls.
Renewed in 2000 is always open , with 9 beds. Startpoint for the very difficult ice routes on Hochfeiler, Hochfernerspitze, and Hintere Weisspitze.

Difficult: F+ / PD - depending on the conditions of the last 50 m ridge

This was the route of the first ascent, quite interesting from the environmental and panoramic perspective. A classic route.

Starting from where you leave the car (1718 m.) the path goes through the Valle di Sottomonte going up, initially through the wood, than pastures, following the valley that bend to NE with beautifull view that, suddenly , extedends up to the summit

Near the Hochfeilerhütte appears on the right the Gliederferner glacier. The path arrives to the hut (2710 m. - 3 hours)

From the hut the path goes NW up to a short steep gully with easy fix ropes and reaches the upper ridge.
Maintaining the ridge on the right, the path goes up between brocken rocks (cairns) and arrives on a plain area with strange flat rocks put vertically, remembering alpine tombstones. 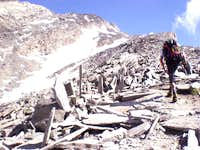 The path becomes very steep and arrives at 3250m. where we can see on the other side the Weisskarferner.
Then the path continues on the ridge up the summit, that appears very clearly.
This last part can be very variable, depending on the presence of snow or ice. The last 50 m. up the summit are quite exposed on both sides and , and as they are frequently covered by snow or ice, they require crampons and ice-axe.
In the not frequent case in which this last part is free from snow, it becomes an easy climb on rock. (2.45 h from the hut). 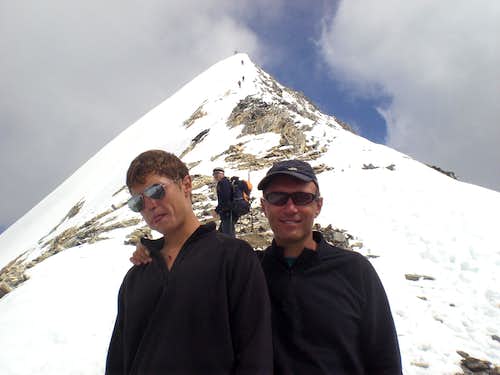 I suggest you to link this page to its parent page Zillertal Alps: http://www.summitpost.org/zillertal-alps/155247

Re: Link to Zillertal Alps

Good suggestion. I have done it.

Re: Link to Zillertal Alps