Midway between El Capitan and Half Dome, Sentinel (Rock) is guardian of Yosemite Valley's South side. The tombstone-shaped, usually dark, ~1500' North face looms forbidding over Leidig Meadow below and is home to one of Yosemite's most notorious routes: the 'Steck-Salathe.' A bit less traveled is the technically harder, but less sustained 'Chouinard-Herbert.' The 'West Face' rounds out the selection of most popular routes on Sentinel.

The easiest way to the summit is the normal descent route, which involves a few sections of 4th/easy 5th class climbing and poses serious rock fall danger in a gully. The approach and descent require a fair amount of fortitude, scrambling/climbing, and route finding skill. Even simple mistakes can be much less forgiving than on other long Valley routes. It is rare to encounter a line on any of the Sentinel routes and climbing here can be a quite solitary experience.

From the 4-Mile trailhead walk up the paved trail past the 'Wilderness' sign and gate. Continue past a cliff and up the trail until you cross under some wires from a 'High Voltage' tower (downhill side), just before crossing a creek. Do not cross the creek!

On the South side of the trail, approx. 25 yards to the West of the creek is the bottom of a small talus/boulder field. Head up through the talus field, following cairns until you reach a faint trail. Alternately, scramble up the West side of the creek bed for about 100' and then head up and West until you either hit the talus field or trail. Follow the steep trail up small switchbacks through stands of small trees and bushes. A clearing at the base of a cliff presents a medium sized pine and a ramp that angles up and right (West). This is the start of the technical and very exposed approach. Know your limitations and belay when in doubt.

Follow the ramp (3rd/4th) up past a small tree/shrub until it is possible to walk out on a narrow, level path that traverses the North side of the ramp. This section is technically a walk, but is extremely exposed and a fall here (for any reason) would most likely be fatal. Pass behind a tree, stay level for a bit longer, then climb up and West through an exposed 4th/easy 5th class section to another ramp. Climb to the top of the ramp (4th) to another exposed 4th/easy 5th class section, then continue behind another tree/bush to a 3rd/4th class gully and sandy section.

Several variations for the approach pitches to the Chouinard-Herbert start here. Continue further up the hill past a tall tree for the start of the Steck-Salathe.

The Sentinel descent has always had a dark side for me. In 1993 it was an all day affair with a haulbag, which included getting lost several times and never finding the easiest way down. The crowning finale was when YOSAR 'rescued' us as we were walking down the 4-Mile trail with headlamps.

After the rebolting effort on the CH (9/05), I nearly got wiped out by a boulder. Unfortunately these things happen. However, in 17 years of climbing and many 'near death' situations (including rock fall), this was quite different: it marked the first time that I saw it coming and truly thought I was done... No place to run, no place to hide, no quick thinking, no let's try this, .... just plain DEAD!

Thus a sincere word of caution. IMHO this descent is significantly more dangerous and challenging than coming down East Ledges or North Dome Gully, especially if you haven't done it before and if it is dark. Wear a helmet and watch what you spring loose on the way down.

From the sandy section just below and East of the true summit walk SE through low lying manzanita to a point where you can see some cairns on boulders below. Follow the cairns through a series of boulders and manzanita, descending into the manzanita tunnels. These tunnels are about 3' high and provide a quick and relatively easy way through what would otherwise be a major bushwack. 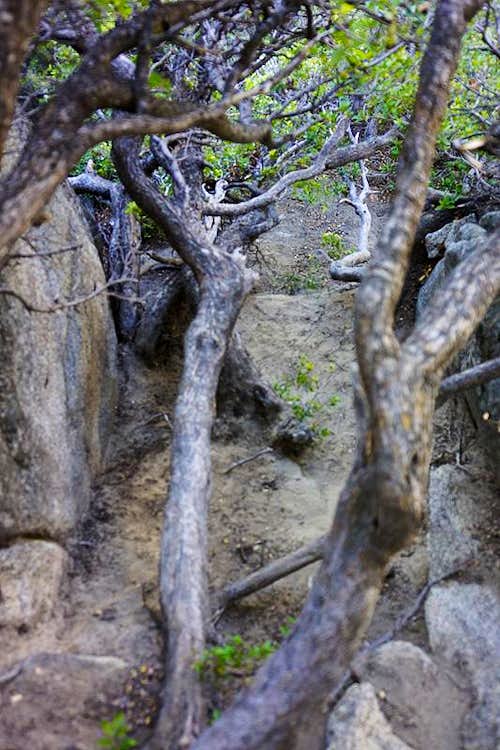 A bit hidden, these tunnels can be hard to find.
At the end of the tunnels is a short (8', 4th/easy 5th) drop into the steep WEST gully.  Scramble down and across toward the Southern wall of the west gully briefly for 30-40' (do NOT continue down the west gully), then head up and left (EAST) to cross over a small saddle into the EAST gully.  The EAST gully is the actual descent!

Follow the gully downhill to the East. After several hundred feet you'll reach a faint trail on the right side of the gully. This trail leads through some trees and drops down through low brush to a loose talus section above a smooth slab. We tried the slab, but it drops off and is fairly serious. It is not a good option and may lead to a dead end/rappel.

Going back to the left (North) into the gully (4th/easy 5th down climbing over a mossy section) just before the trees on the trail thin out proved to be a better option. Back in the gully continue down the hill on mostly 3rd class terrain. There are two more sections that require some down climbing and while technically 5th class, they are not horribly exposed.

Continue down the gully until it widens and you reach the West fork/drainage of the creek. Cross the creek and head out toward a tongue shaped low angle to flat section between the West and East drainage. This looks improbable, but there is a relatively easy 3rd/4th class scrambling descent from the tip down to the NW side.

About 50' down you'll encounter a slab (4th/easy 5th) that diagonals down toward the NE, then cut back toward the NW in a small gully. Alternately it seems possible to avoid the slab by descending straight down along a vegetated gully (we did not try this) which looks (?) easier. Use your own good judgement.

Follow the right (East) edge of the West fork drainage and work your way down several ledges, zigzagging back and forth to pick the easiest way down.

Head along the right (East) side of the West drainage, clear a step(4-5'), and follow a faint path down the hill until you get to a slab in the creek. Cross the creek above the slab and work your way North and down the hill through bushes between the West side of the creek and the base of a cliff to the West.

A bit further down the hill a faint trail appears and contours around the base of the cliff to the NW. A few hundred feet further is a pine and the beginning of the 1st approach ramp.

Pick up the trail going down the hill to the 4-Mile trail and head West to get back to the parking area and trailhead.
Note (6/2014): climbed the descent route with Nurse Ratchet.  Not much has changed.  The gully still has the same 4/5th class sections and rockfall potential, although it was significantly easier without a haulbag. 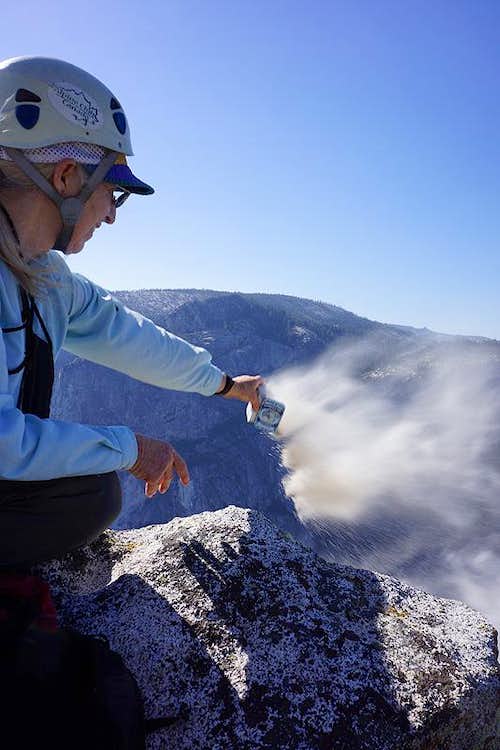 Brutus on top of one of his favorite places...

For detailed bureaucratic information go to the Yosemite Valley - Logistical Center page. Currently (9/2005), overnight parking at the 4-Mile trailhead has not been a problem, but that may change in the future.

It is highly recommended that you do NOT leave any food or other substances with a strong odor (sunscreen etc.) in your car (the bears will get it) or display anything that could be taken for a food container (grocery bags, ice chest, etc.) in plain view (the rangers will ticket you).

The best time to climb the North facing routes is most likely mid-August (possibly hot) through September, although a dry year may yield quite good conditions sooner. The North face gets sun in mid- to late afternoon during this time.


Other Information of Interest

'Camp 4 - Recollections of a Rock Climber' - Steve Roper's 1994 treatise chronicles the history of Yosemite's 'Golden Age,' including first and notable ascents on Sentinel. A must read for anyone who's interested in climbing in the Valley.

Guillaume & Jennifer Dargaud's trip report and pictures of the Steck-Salathe. Their website is well worth checking out. Some of the pictures are excellent.