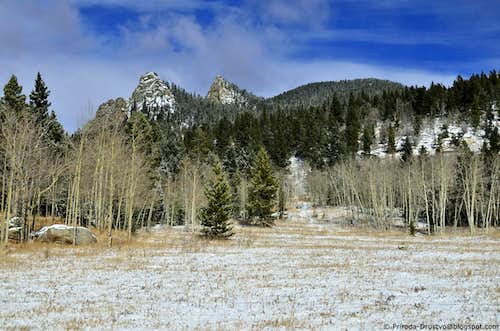 Mount Thorodin may offer some of the most challenging hiking and climbing in the area around Colorado's Golden Gate Canyon State Park. Located in east-central Gilpin County and with almost 1,500 feet of prominence, the 10,540 foot mountain can be easily seen from most directions. On the west side, three huge granite buttresses give Thorodin a very distinctive appearance. The 200 foot rock faces provide some intriguing possibilities for technical climbs. From the top of the mountain one can see clear views of Longs Peak and Indian Peaks to the north, James Peak and the continental divide to the west, Tremont Mountain to the south, and to the east the back side of Boulder's mountain parks. Thorodin reflects the topography of eastern Gilpin County, which is characterized by high rolling saddles and steeply eroded canyons. Precambrian rock covers most the area, and consists mainly of quartz and gneiss. According to local legend, early settlers were undecided on whether to call the mountain "Thor" or "Odin", so Thorodin became the compromise name. Not much remains on the mountain from early days, but there is an old shack in a small meadow near the summit. Occasionally, hikers will find traces of old trails or logging roads. There is a Thorodin webcam that works sometimes. It is located at: LazyZ.org. Thorodin is also the site for a 145.310 MHZ repeater station, located near the summit. Close nearby, to the north, is 10,511 foot Starr Peak, where a fire lookout tower was built in 1941. That tower was removed from service in 1976. Tremont Mountain, at 10,388 feet, is just to the south in Golden Gate Canyon State Park. The trail up Tremont to Panorama Point provides some great views of Thorodin to the northeast. 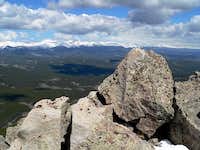 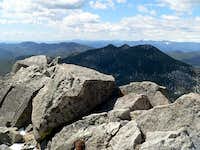 Getting There & Route Options 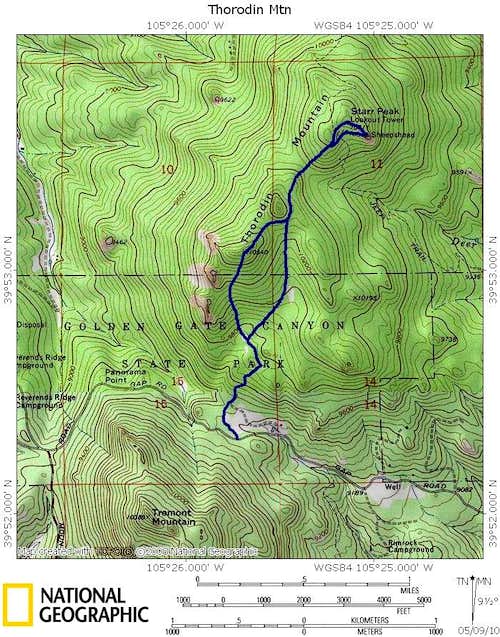 On some maps, a Thorodin Mountain Trail is shown. Unfortunately, access to keys parts of it now lie on heavily-posted private property. And access to the Thorodin Mountain Trail from the west on Bolling Gulch Trail faces similar difficulties. In October, 2009, officials at Golden Gate Canyon State Park recognized this problem and advised me that probably the best way to reach the summit of Thorodin, was to bushwhack from Gap Road, in the northwest part of the park. While much land on other parts of the mountain and near the mountain is private, the summit is on national forest land that borders the park. While there are several routes to Golden Gate Canyon State Park, the best may be from highway 119. From the Denver area, you can travel west on highway 6, until you get to the 119 turnoff. About 11 miles further on 119, you will come to Gap Road. Turn right and follow Gap Road to the Reverends Ridge area. The shortest distance from Gap Road to the summit would be from somewhere near midway between Mountain Base Road and Aspen Meadows Campground Road. When you find a suitable place to park in that area, you can begin your hike. It is highly advisable to get a good topo map and a compass or GPS to plan your ascent to the summit. The USGS Tungsten Quadrangle Map is a great asset. You can get one from the Boulder Ranger District, which manages this part of the national forest. If you ascend from the south, aiming for just behind the buttresses, you will be just up from a draw in a thinly-forested area. If you keep to your bearings, it should not take too long to reach the summit. The view from the top is great, and all the rock on the west sides of the buttresses offer great potential for more fun. To view an excellent route option, be sure to check out the Route Page attached to this page.

This summit can be accessed any time of the year. So your greatest concerns will probably be weather. Summer lightning and winter blizzards are good causes to stay home and go another time. For the latest weather for the Thorodin area, click here: Golden Gate State Park Weather 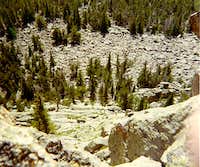 Golden Gate Canyon State Park offers not only great campsites, but also has cabins and yurts. Roosevelt National Forest has a number of campgrounds. If you prefer lodging, many nearby communities have facilities. The list below should be of some help: Golden Gate Canyon State Park (303) 582-3707 Roosevelt National Forest Campgrounds Boulder Ranger District Office (303) 541-2500

On June 10, 1972, a climber was killed by lightning, while attempting to rappel down the west face of Thorodin. His partner was injured by the lightning strike. While Thorodin is not a major peak in the Rockies, dangers still exist in the form of falls, wildlife, dehydration, freezing temperatures, lightning, and other hazards that are common for hikers and climbers. Please plan your trip carefully, and take wise precautions.