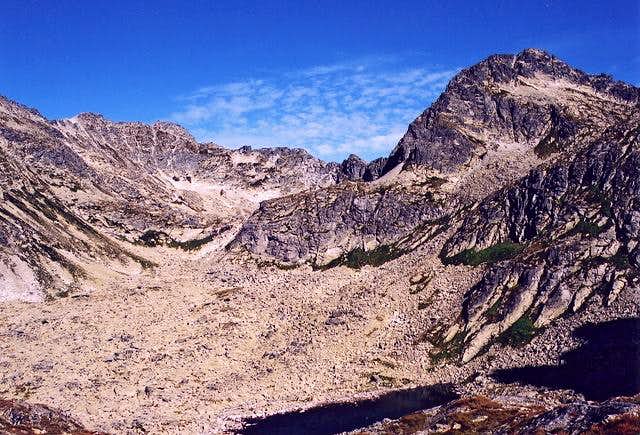 Štrbský Štít (2385) (right) above Mlynická Valley The name of the peak comes from the former name of Mlynická Valley - Štrbská Dolina as the one belonging to nearby Štrba village. First known ascent: About 1895 - Lajos Petrik and companions There is a serous probability that the summit was reached earlier because the whole area was a popular hunting terrain and the peak could have been also reached during cartographic measurement works. First winter ascent: 5.I.1906 - E.Baur and Alfred Martin 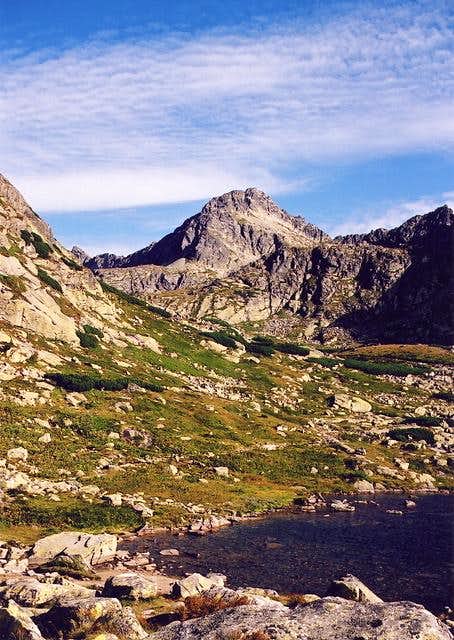 The key thing when planning a stay in Slovak High Tatra is to get to Poprad. It is the major city in the area with very good communication links with the rest of the country. After getting there you should go to one of close High Tatra resorts : Starý Smokovec or Štrbské Pleso for example . The last type seems to be best base when thinking about climbing Štrbský Štít peak (It is a center from which most of marked routes of the area starts their run) You can of course find accomodation anywhere in the area, thanks to an electric train line you'll find yourself anywhere you want at the right time. Slovak bus and train connection searchin Poland and in Poprad nearby in Slovakia. Cracow Airport Poprad-Tatry Airport

There are no marked routes leading to the summit of Štrbský Štít but the peak is accessible for more experienced mountaineers by many non-marked routes. According to current Tatra National Park - TANAP regulations - tourists are allowed to hike only on marked trails. Many prominent "non-marked" High Tatra peaks such as Štrbský Štít for example are legally accessible only in two cases:
- Accompanied by a licensed Tatra Guide service
- Being the owner of a mountaineering club licence affiliated to the UIAA (for example, British BMC, French CAF/FFME, Polish PZA or Slovak JAMES)
There is a great choice of rockclimbing routes, especially at Strbsky's 400 meter high North face falling down vertically to highest parts of Hlinská Valley.
As for "mountaineering routes" (non-marked, as mentioned previously), two are frequently mentioned to be the easiest. They are described in the excellent book "Nieznane Tatry" by Leszek Jackiewicz (in Polish), as well as in one article online of the GORY magazine (Polish).
These 2 routes are : A : The most famous route. Difficulty : 0+ (easy); Time : 2h. Let's mention that like Baranie Rohy, a project of opening officially this trail is currently being studied. If you are considering ascending the peak by one route and descending by the other, this one is more appropriated for the ascent, first because it is the closest from the starting point Štrbské Pleso (it's always better to be as early as possible on the top, for the view and the weather), second because finding the passage to scramble down can be trickier going down. Leave the marked trail when you are approximately in front of the lake Nižné Kozie pleso. You will have to cross first an uncomfortable field of unstable granite boulders, before climbing steeply on grassy slope, just along the side of the rocky wall on the right. Then, the slope becomes more gentle and you see the lake Nižné Kozie pleso, a beautiful lake, frozen until late in the early summer. From there, you have a good view to the peak Štrbský Štít, and you can see a chimney going from the base, going up slightly towards the left, and ending on the South ridge of the summit. Walk first in this direction, where you will see a shelter under a large rocky flat rock (2 or 3 people can accomodate under it in case of storm), and then follow the cairns until the slope. Then, footprints become more and more visible to become almost a path on the base of the chimney. The chimney requires a bit of scramble with the hands, but never very difficult. In the end of the chimney, you need to walk few meters on the South ridge, before you suddenly discover how easy is reaching the top, switching on the West side of the mountain, and noticing on the way how easy is the route B described later. The top needs few last scrambles, and then you can enjoy the gorgeous view to 3 different valleys. Route A to Štrbský Štít
B: The other famous route, in fact a bit easier 0+ (very easy; alike the A, no scramble required at all), and shorter (Time : 1h). As said previously, if you consider the traverse, this route is better done going down. In this case, you are also close to Bystré Sedlo, and you can consider making the perfect hike going back to Štrbské Pleso though the marked trail of the Furkotska Dolina. Starting the description from downside, this route starts at Capie Pleso, which, when leaving the trail, you better circumvent on the Western shore. Then, here also, you need to cross first a field of unstable big granite boulders. Unkike what you can expect as seen as from Bystré Sedlo, the whole West face of Štrbský Štít is made of gentle slopes on which you only need to walk (steeply althrough), until the point it connects to route A near the top. The only feature is a vertical hollow on the middle of the West slope, often filled with late snow. You need to find the beginning of the trail, marked with cairns, on the left of this line. Later in the middle of the ascent, you need to switch on the opposite side of this hollow, in the point it is the most narrow (at approximately 1/3 of the ascent). If there is snow, you might need to be careful at this very place, perhaps crampons can be safer . For the rest of the ascent, you will have no problem to find your way, as there are many routes going between every prominence, which look almost all of them like a trail. Route B to Štrbský Štít
C: Other Marked routes of the area : Strbske Pleso - Mlynická Valley - Skok waterfall - Bystre Sedlo(2314) pass - Furkotska Dolina. You can also consider climbing Solisko. For the return to Štrbské Pleso, choose rather the yellow and red trails than the blue one going under the chairlift pylons. Note: the man of the car park at Štrbské Pleso arrives at 7:am and leaves at 18:pm. If you arrive before this time and have a beer after the hike, you get the beer instead of the price of the car park :) Yellow marks, 3 h Eric Visentin (2008) It is Tatra National Park(TANAP) area, there are no entry fees but you can hike using only marked trails. Watch out for strict rules of wildlife conservation. Stay always respectful to mountain nature! From 1.11 to 15.06 year by year all marked routes in TANAP(the whole Slovak side of Tatras) are being closed for tourist activity (besides the routes leading to mountain chalets).

Lots of accomodation possibilities of different standard and price on Slovak side of Tatra Mountains. The nearest town is Strbske Pleso- Slovakia's one of the greatest mountain resorts, full of hotels and guest houses. Strbske Pleso is definetely the best base when planning climbing Strbsky Stit peak peak, all marked routes of the area starts their run exactly there. Strbske Pleso Hotels Hotel Permon in Podbanske In the mountains: Chata Pod Soliskom mountain chalet Contact: +421 905 652 036, +421 907 949 442 e-mail: info@chatasolisko.sk Chata Pod Soliskom mountain chalet Popradske Pleso Mountain Hotel(1500) This hotel is situated upon beatiful Popradske Lake in neighbouring to Mlynicka Valley - Mengusovska Valley on the main marked route leading to Rysy and at the entry to Zlomiskova Valley (Rumanov, Ganek and Vysoka tourist routes). Great scenery but the area is usually overcrowded in the summer. The cheapest bed - about 450 SK per night. Popradske Pleso Hotel Wild-camping in the Tatra National Park is strictly forbidden! There is a very good campsite in Pribylina. There is a website of the camp and many other camps and with lots of information here in slovak language, but main informations are nearly understandable those who don't speak slovak.