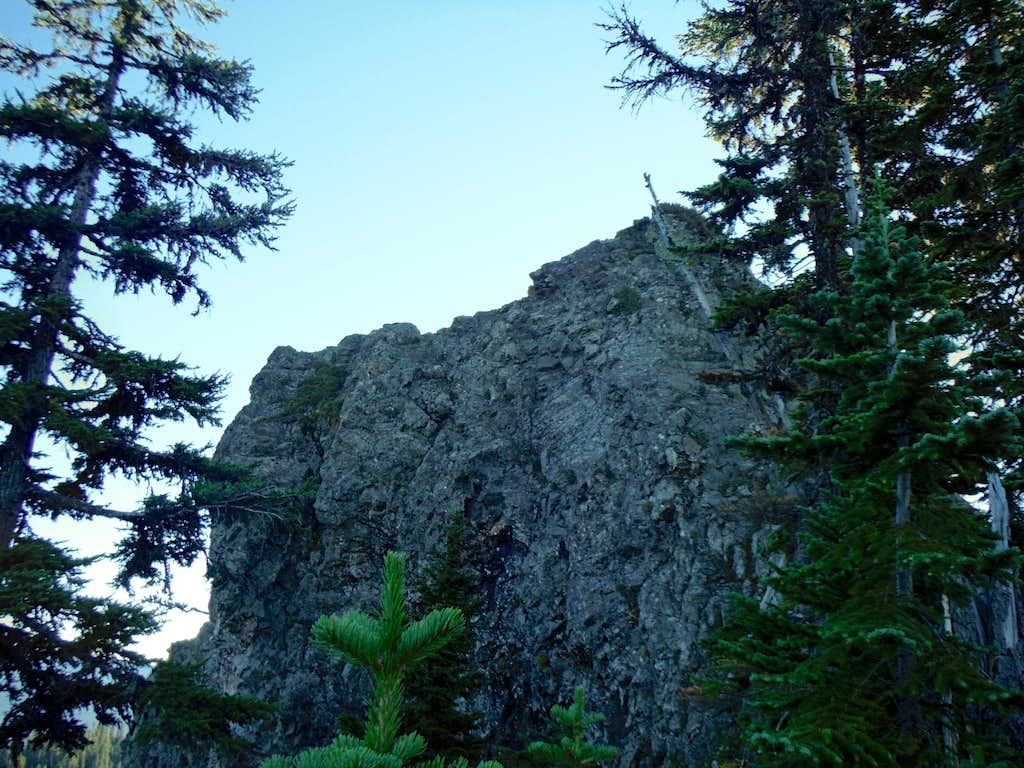 The final summit pinnacle from the west. The scramble is what really makes this peak desirable

Ugly Duckling is not an especially popular summit in the Central Cascade region. In fact only peakbaggers interested in completing the Home Court list really have an interest in it. It is ranked number #89 on that list and it does have over 600 feet of prominence. But due to higher peaks in the I-90 region as well as peaks in the Teanaway Region and the Rachel Lakes area this peak gets overlooked by everyone. It is assumed that the name Ugly Duckling was given due to the fact that is peak was smaller than some of the others in the region. Some peakbaggers with four wheel high clearance vehicles might look at this peak as ugly due the fact there is rough road that come within 475 feet of the summit. Others might think that the lose rock on the final summit rocks scramble is ugly. 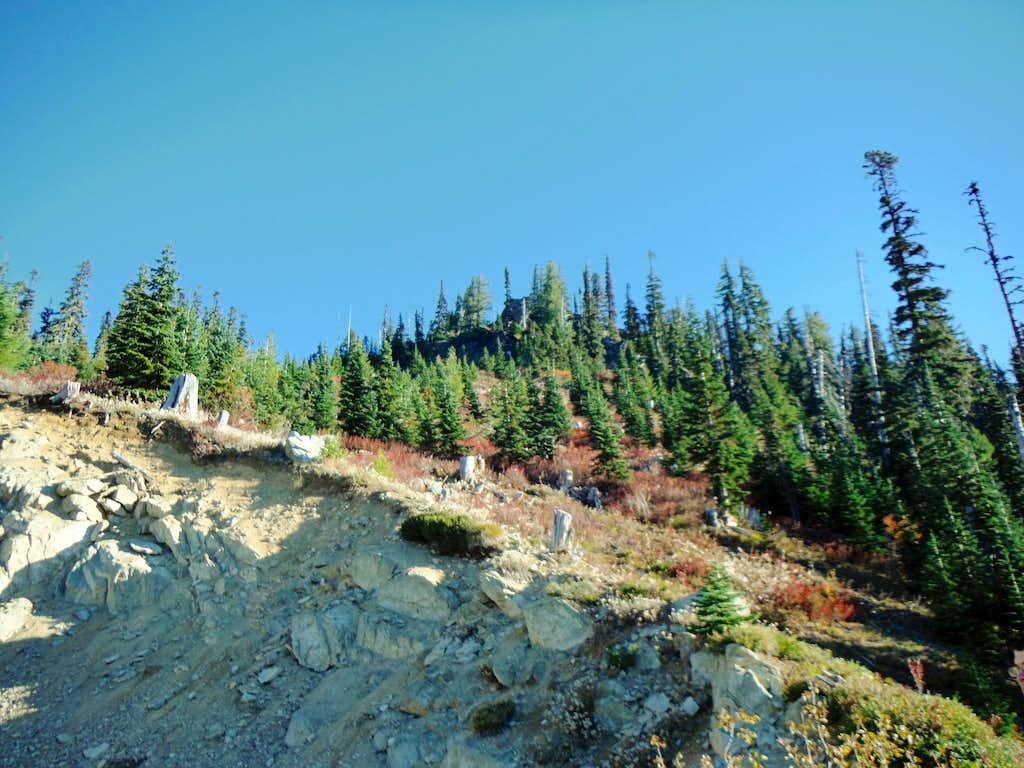 That all being said no one who climbs Ugly Ducking on a clear day will claim the views are ugly. The true summit rock is very open and quiet exposed leading to great views of Lake Kachess, Alta Mountain, Chimney Rock, Mount Thomson, and of course the dominant Mount Rainier to the south. But to get these great views will require a short Class 2+ to Class 3 loss rock scramble by easiest route. Some may laugh at this but I personally would have like to have my helmet on some of the scrambling due to all of the loose rock. And to find that easiest scramble you will have to be on eastern side of the rock because the western side is home to a solid 25 foot low Class 5 rock climb. 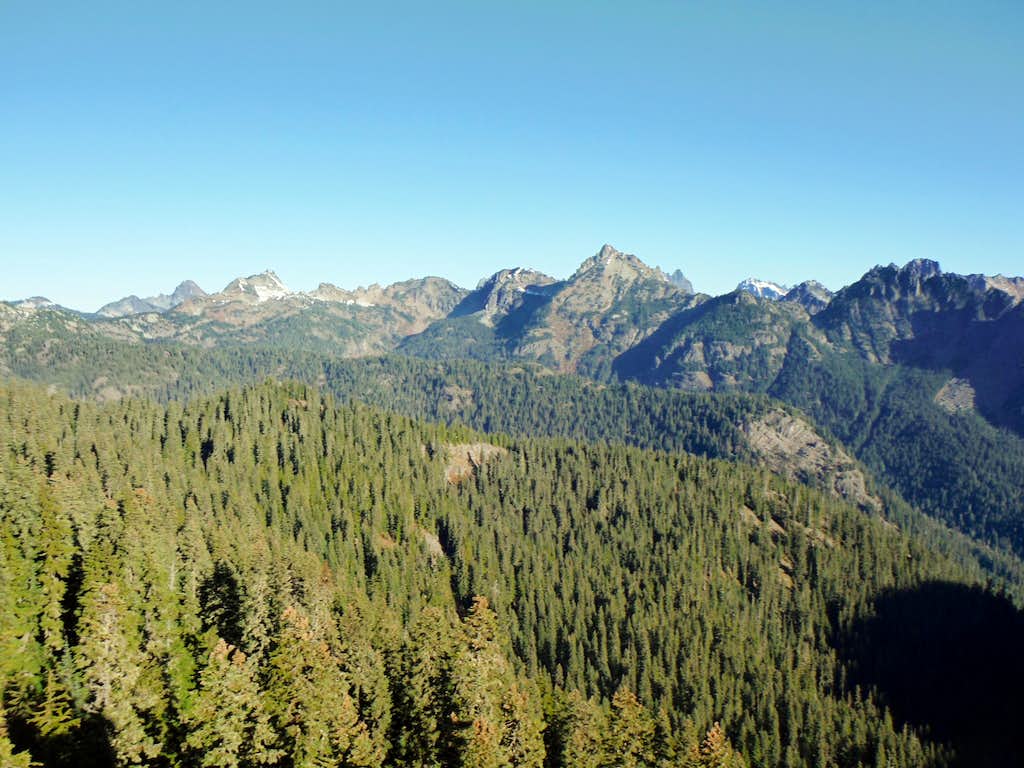 Good view can be seen on Ugly Duckling

It should be noted that Ugly Duckling is at most a two to three hour visit during the summer. Often those who go up Ugly Ducking like to combine it with either Snooze Peak or other peaks in the region. In winter this hike up come to a whole new meaning and often is a very long day. The scramble to the summit will have many cornices so if one tries to climb Ugly Duckling in winter they should bring an Ice Axe and be very knowledgable of the weather conditions before they go up. Expect at least 15 miles roundtrip and at least 4000 feet of elevation gain though some of the route up will be on snowmobile path. Because of the effort needed to summit this mountain I would not recommend it as a winter destination. 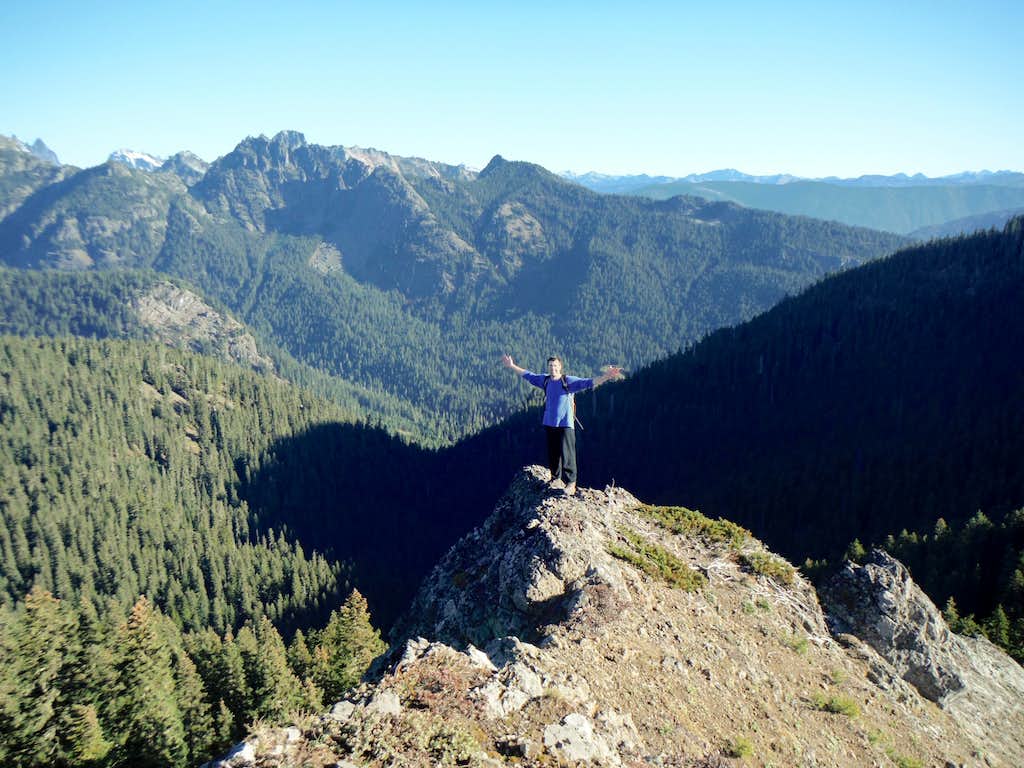 TO THE UGLY DUCKLING SCRAMBLE ROUTE: Get off on Exit 62 toward Kachess Lake Rd and head north on it for 1.5 miles continue it continues as NF-49. At the 3 way stop stay to the left on NF-4930 and not to the right (The right will take you to Rachel Lake where you do not want to go. Stay on that for a half mile and than merge left on to National Forest Road 4948. Stay on the road for 3.5 miles until another gravel road (NF-120) will be on your right. Many people with passenger cars will stop and walk up NF-120 to the hairpin turn where Ugly Ducking can be viewed (2 miles). Others with high clearance vehicles will continue all the way to the hairpin turn. 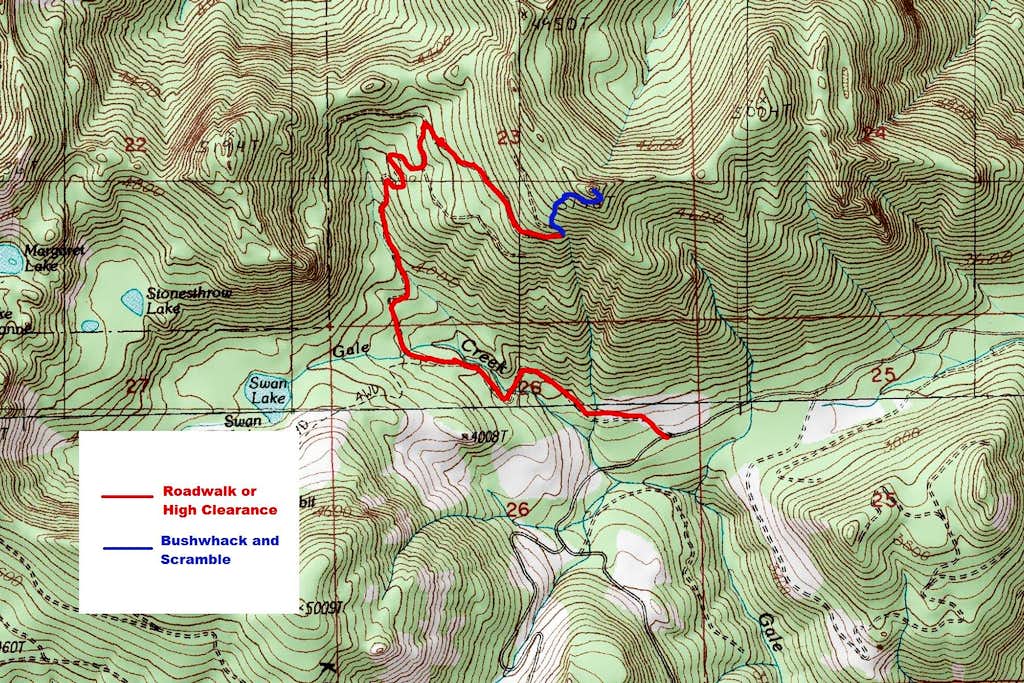 Map of the route up Ugly Duckling

Ugly Duckling's summit rocks can be seen from the hairpin turn on Forest Road 120 for which you have either walked up or drove up with your high clearance vehicle. From there just bushwhack up the to the rock. Once up around the scramble area head to the eastern part of the rock where the rock is very loose (kitty litter) but it only Class 2+. If you are interested in making a technical climb of it head to the western side of the rock or even the northern side of the rock. There you will find Class 4 and 5 moves on more stable rock.

Provided you are going from May to October there is no red tape. If you go in winter you will be required to have a SNO-PARK Pass.

Ugly Duckling is recommended is the spring summer and fall mostly after the snow has considerably melted and the gated are off most of the forest road (May to October). If you do attempt Ugly Duckling in May be prepared for snow to still be around on the mountain. Bring an ice axe in case the last scramble area is covered in snow.

In winter you will be a SNO-PARK in order to park your vehicle. One is also looking at least a 15 mile, 4000 foot elevation up to Ugly Duckling. You are likely going to be the only person on the mountain. You will be on a snowmobile path for a good percentage of your trip. For all those reason I would not advise going up Ugly Duckling in the winter.

From what I saw there were some okay camping spots along Forest Road 120 about 0.5 miles from the junction. Past there good camping spots were minimal. The summit is exposed and very small leave barely any room to even sit. Personally I would not have any desire to bivy on Ugly Duckling.