Having been to a number of these volcanoes while serving in the Peace Corps in El Salvador, I thought it appropriate to gather them together in one place for a one-stop-shop list of the major volcanic peaks in El Salvador. This country has an incredibly active volcanic system, with numerous large peaks, a very active tectonic setting, and a large amount of natural beauty to go along with it all.

The geologic setting of El Salvador puts it along the "Ring of Fire" that we are all familiar with from gradeschool geology. The small country's situation along a subduction zone on the Pacific means that all of that molten rock being dragged underwater ~90 miles out at sea makes its way back to the surface through a line of volcanoes almost perfectly situated 20 miles (+/-) inland from the ocean. Look at a satellite image, or Google Maps terrain view, and one can easily make out the distinct line of peaks rising many hundreds, or thousands as it may be, of meters above the surrounding terrain.

This area has been volcanically active for a long time, between the Caribbean and Cocos Plates, and there are many old craters that blew their tops thousands of years ago (Lago Ilopango, for example). This fascinating area is surely due to the respect of a page grouping the major peaks to make for easier browsing! This list goes from west to east, hitting the major ones, even those without Summitpost pages. There were a few peaks already on SP, and I made a couple of pages for volcanoes I climbed and was familiar enough with to do so, but there are others that I do not know enough to complete a page on.

1775m
Straddling the border of Guatemala, Chingo is best climbed from that side but it is accessible from the El Salvador side as well. A brief page on SP gives more detail...

2036m
A group of old and new volcanoes, this is the highest terrain in El Salvador. There are no major peaks, per se, but with Apaneca and Ataco, as well as the famous Ruta de las Flores, this is one of the prettiest and most traveled areas in El Salvador.

2381m
The tallest volcano in El Salvador, Santa Ana is near the Volcanoes National Park. A guided tour leaves Cerro Verde daily to climb, given the weather is nice enough to do so. Fantastic views and a good trail await those who climb Santa Ana! SP page for more info. 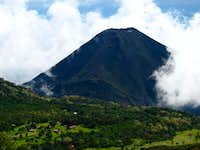 2030m
The Volcanoes National Park is based on this extinct volcano. There are hiking trails, with great vistas to both Santa Ana and Izalco, and the hikes to both peaks leave from here. SP page 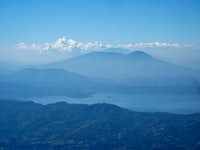 1893m
The San Salvador volcano lords over the sprawling metropolis of San Salvador, the capital city of El Salvador. The hulking dome is due west of the city, and there is a road leading right up to the crater, called "El Boqueron" No SP page for this one, since it is not really even a hike, but it is quite impressive and if anybody has pictures please feel free to add them to spice it up.

2182m
This is the second-highest volcano in the country, and has the largest vertical gain from the surrounding terrain. Supposedly the toughest of all to climb due to terrain and accessibility. From the top, it is possible to see almost the entire country. SP page

1600m
This is another hot spot of volcanic peaks, similar to the Apaneca Range. The best-known peak is Tecapa. There are numerous peaks here, as well as the touristy and beautiful Alegria area. Not enough info on my part for an SP page, but a beautiful area! 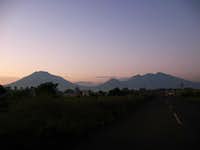 1449m
Probably the least-known major volcano, this one has almost no information out there on it. It is similar to the San Vicente volcano, in that it is not really presently active and forested to the top, but it is not extinct and it is an impressive sight from the coastal plains in the area. 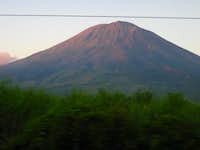 2130m
The most active of Salvadoran volcanoes, San Miguel is climbed via a grueling scramble up the steep sides. This volcano has an incredible double crater, of which you can walk in the outer and peer into the inner. SP page with more info.

1225m
The easternmost major peak, this volcano lords over the Golfo de Fonseca, shooting almost straight out of the water. I have not climbed it, but it is climbable. No SP page, sorry 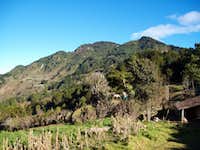 2730m
While not actually a volcano, it is the highest point in El Salvador and I thought it deserved a place on this page nonetheless. There is an SP page with more information on this Honduran border peak.

If you have any more information you would like to add, please let me know. Photos, peak pages, etc. are all welcome!