The Cascade Volcanos are some of the most sought after summits in the USA. The main reason being that many of them are solitary giants visible from metropolitan areas. But there are many other, lesser known and hidden peaks that await the intrepid climber. The singular grandeur, deep green forests, and stupendous amounts of snowfall make for a climbing experience that is unique to the world. There is one huge caveat to climbing the Cascade Volcanoes: the quality of the rock. Seldom is heard a climber raving about the high quality rock found, and nary a traveling climber wishes to visit this range to sample the 'bullet' 'bombproof' 'solid' stone. This page is organized from a climbers point of view, not that of a geologist. However, the geology affects the types of climbing found, so they have been grouped semi-arbitrarily into 3 categories based on the primary types of volcanoes, and the types of climbing found as a result. Glaciated Composite Peaks Shields and Plugs Buttes and Cones

These are the monsters. They were created from multiple eruptions, interrupted by collapses, explosions, and periods of rebuilding. The ensuing layered mountain often appears large and lumpy, with glaciers continuing to alter and sculpure the form. Elevation: 9,000 to 14,000 feet. 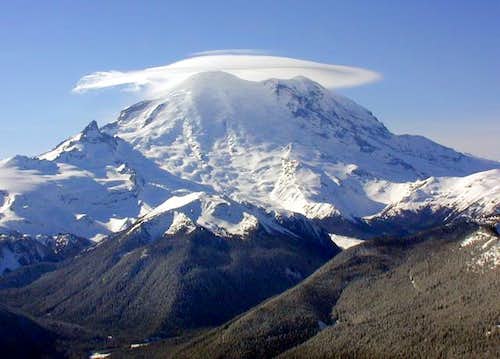 Climbing: Mostly on snow and crevassed glaciers. Most rock climbing is on ridges and cleavers, of a low technical standard and loose nature. Examples of easier climbs: Mount Adams South Spur South Sister, South Spur Examples of more difficult climbs: Liberty Ridge, Mount Rainier Weather: These big peaks often create their own weather, with white-outs and snowstorms, while surrounding areas are clear. Conversely, the summits can often be in sunshine, while the surrounding lowlands are under low clouds and rain. Because of the close proximity to the Pacific Ocean and the jet stream, these peaks continue to break world snowfall records, with Mount Baker and Mount Rainier contending for first place. The Emmons glacier on Mt. Rainier is thicker than that of the Khumbu on Everest. List from North to South: Mount Baker Glacier Peak Mount Rainier Mount Adams Mt. Saint Helens Mount Hood Mount Jefferson North Sister Middle Sister South Sister Mt. McLoughlin Mount Shasta Shastina Lassen Peak

These mountains tend to be older than the big composite peaks, and are usually extinct. Shield volcanoes are formed from more runny lava, and are broad and lower than composites. Plugs can be shield volcanoes, but what sets them apart is the erosion of the surrounding layers. Over the eons, weathering (especially glaciation) has exposed a harder plug of basalt, or harder rock that withstands time while the other layers are stripped away. The resulting formation is a spire of rock surrounded by more gentle slopes. Elevation: 7,000 to 10,000 feet. 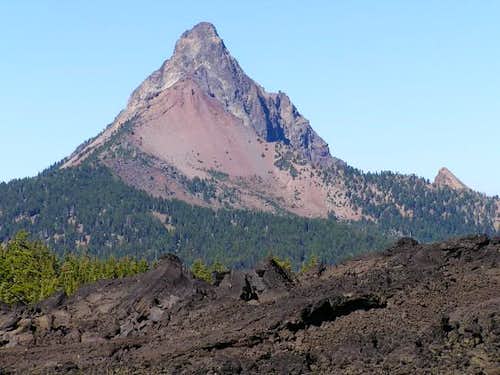 Climbing: The Shield volcanoes make for more gentle hikes than the bigger composites, and often make ideal ski trips. The plugs are an attraction, as their form appeals to the climber, and the quality of rock is better than elsewhere. Weather: The lower elevation, and often (in Oregon esp.) being on or east of the Pacific Crest makes for more gentle weather conditions. Count on heavy snowfall in the winter, and beware of the plugs in Thunderstorms, as the spires attract lightning. Three Fingered Jack Mt. Washington Broken Top Paulina Peak Diamond Peak Mt. Yoran Mt. Thielsen Yamsay Mountain Maiden Peak Ash Creek Butte

These mountains appear more simple than the composites or plug formations. Lower elevations mean less glaciation, and therefore less deformation. This also limits the variety of climbs, as the gradient is more uniform from all aspects. While some mountains on this page are actually composite, because of their lack of heavy glaciation, they are included here. Elevation: 5,000 to 9,000 feet. 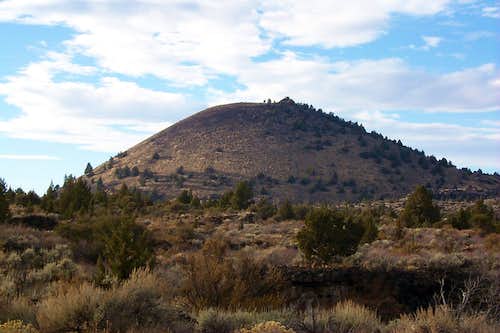 Climbing: Lower elevation peaks can be brutal slogs through endless talus, or there may be a road\trail\ski-lift to the summit. Higher elevation peaks are famous for their skiing routes. The main draw of these peaks is their ease of access, and that they 'stand out' from the surrounding landscape. Weather: Summers ascents can be baking hot, especially for peaks well east of the Pacific Crest. Ski season generally runs from January to May. Mt. Bachelor Schonchin Butte Grizzly Peak Black Butte CA Black Butte OR Belknap Crater Crater Peak