Zabi Szczyt Wyzni from Niznie Rysy
Though it is central part of High Tatras, Zabi Szczyt Wyzni peak is located quite remotely from popular marked trails, so despite relatively easy access both from East and West and famous summit panorama with especially interesting view towards close and dominating Niznie Rysy massif, the peak has never attracted big attention of climbers and hikers.
Thanks to that the surrounding area is a real temple of high mountain nature.

Zabi Stit (first on the right) from Mlynar
The peak rises above 3 valleys. Rybiego Potoku valley spreads below its western face on Polish side with nearby Morskie Oko and Czarny Staw lake cirques. The northern face falls to Zabia Bielovodska valley, the lateral branch of main Bielovodska valley and its eastern slopes descend to small rocky valley of Spadova falling steep slabs of its threshold down
to Tazka valley. The importance of Zabi Szczyt Wyzni’s location lays mostly in fact that the most convenient connection path between Rybiego Potoku and Tazka valleys(via Spadova valley) crosses small saddle just below its summit. One must remember that Zabi Szczyt Wyzni peak was a witness of some tragic events in the past to mention at first dramatic history of the first winter ascent from 1930 after which the peak gained its bad fame.
It was 14th April 1930 when four, young Polish climbers were descending from the peak after first successfull winter ascent. Since the morning the weather was good, but while they were traversing the ridge towards Mlynarovo Sedlo pass it suddenly broke down with a huge storm. Their ropes got iced soon and rappelling straight down the valley became a neverending torment and finally they were trapped in deep snow above high cliffs where they were forced to survive whole night in hellish conditions. Next day morning each of them began to save life on its own not taking care for the rest of companions.
Deadly exhausted and seriously freezed they evacuated themselves down via Zabia Bielovodska valley.
Zbigniew Gieysztor, 27 year old student from Warsaw claiming he feels quite well decided to descend as the last one.
A few hours after three climbers reached Roztoka chalet in Bielovodska valley and fourth companion still wasn’t there, people got worried about him and Andrzej Krzeptowski – the chaletkeeper in these days went up the valley to meet him. Unfortunately there was nobody coming down and Krzeptowski finally reached Zabia Bielovodska valley finding Gieysztor body on the stream just below the lower lake... Gieysztor tragedy caused a spirited discussion among mountain climbers in Poland and three climbers were made responsible for the drama leaving their rope-partner on the way, alone in the mountains. On 29th December 1959 huge avalanche fallen from Zabi Szczyt Wyzni killed three climbers from Wroclaw, their bodies were found down in Zabia Bielovodska valley in June next year... The name of the peak alike to the name of the whole ridge and area comes from folk name of Zabie, which may be directly translated as “froggy”. The name is considered as the oldest one in the area and its origins as Paryskis’ Great Tatra Encyclopedia states are related with... frogs, so common around lakes in surrounding valleys. First ascent: 26.VII.1905 – Janusz Chmielowski with companions and guides First winter ascent: 1930 – Stefan Bernadzikiewicz, Zbigniew Gieysztor, Antoni Kenar and Wieslaw Stanislawski

Zabi Szczyt Wyzni peak is one of two most important “branching points” in the lateral ridge leading from Rysy peak to
Niznie Rysy and further North via Zabie peaks. Along the whole length of the ridge leads borderline between Poland and Slovakia. The peak rising above 3 valleys of Rybiego Potoku(West), Zabia Bielovodska(North) and Spadova(East) is located between Niznie Rysy in the South(separated by Ciezka Przelaczka pass) and Zabi Mnich crag in the North(separated by Bialczanska Wyznia pass) in the point where another ridge branches east culminating in nearby Mlynar peak on Slovak side
(both peaks are separated by Mlynarovo Sedlo pass). To be topographically precise, the point in which that ridge going towards Mlynar begins is not the Zabi Wyzni main summit, but a small saddle in its closest neighbourhood(NW) known as Wyznia Spadowa pass(2235) what makes it a real geological curiosity in Tatra range conditions. Morning Tatras
You can visit the area both from Slovak and Polish side of the mountains and it is usually visted from North while hiking or staying in one of neighbouring valleys of:
Rybiego Potoku or Bielovodska. Both trailheads are easily accessible by public and private transport from Polish and Slovak side of the border. By car or you must get to Lysa Polana or Palenica Bialczanska(car parks). There are numerous bus connections to these places from Zakopane, Poprad and Stary Smokovec. Slovak bus and train connection search PKS Cracow – Zakopane bus departures PKP - Polish Railways connection search PKS Zakopane - buses The nearest airports to Tatra mountains are located in Cracow(100 km)
in Poland and in Poprad nearby in Slovakia. Cracow Airport Poprad-Tatry Airport

There are no marked trails to Zabi Szczyt Wyzni summit. The nearest marked paths are the popular road leading down along Rybiego Potoku valley on Polish side to Morskie Oko chalet and further up to Rysy peak and the blue trail in Bielovodska valley on Slovak side.

Zabi Wyzni peak above Spadova valley
The most convenient summit routes are not technically difficult, but demand good orientation in local topography. The more often used one leads from South-West from Czarny Staw pod Rysami lake and the second one reaches the summit from Spadova valley in the East accessible via Kamzicia Strbina pass - small saddle in Niznie Rysy eastern ridge, just below Tazka Veza summit crag. Alpine climbing in the area can be practiced in compliance with National Park rules. The real climbing challenge is 500 m high north face above Zabia Bielovodska valley offering some great routes of serious difficulty level in solid granite rock. The diretissima of the wall was successfully climbed in 1946 by Wanda Kaminska and Tadeusz Orlowski. 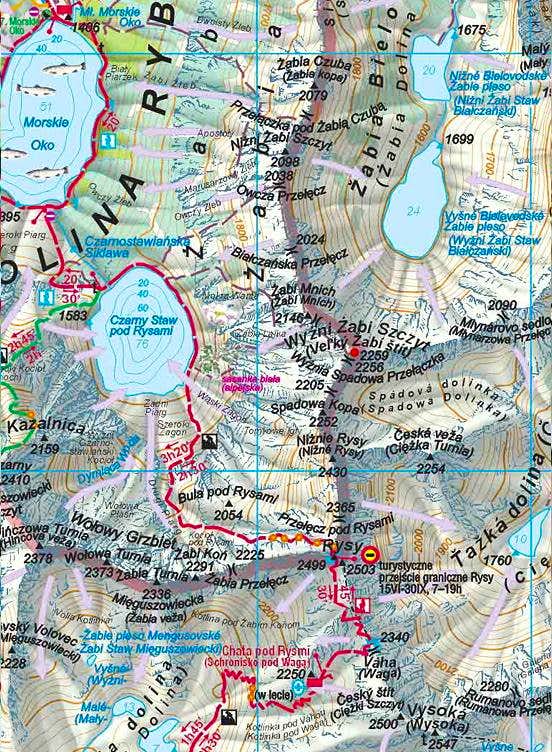 It is Tatra National Park area and You are allowed to hike using only marked trails. Watch out for strict rules of wildlife conservation. Stay always respectful to mountain nature ! From 1.11 to 15.06 year by year all marked routes in TANAP(the whole Slovak side of Tatras) are being closed for tourists (besides the routes leading to mountain chalets). On 21.12.2007 Slovakia along with Poland signed Schengen Agreement and accessed to "open borders" Schengen Area,
however one must remember that National Park regulations prohibiting crossing the border beside marked trails in the whole area remain in force.

Lots of accomodation possibilities of different standard and price on both sides of Tatra Mountains.