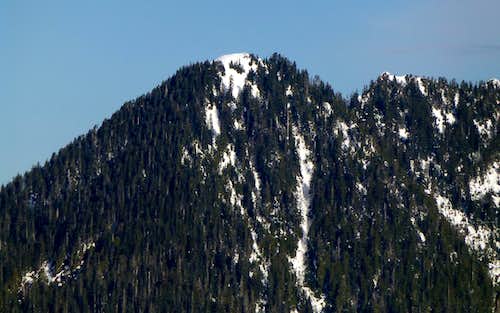 Anaconda Peak summit from Everett Peak
Anaconda Peak? Most people have never heard of it, and neither had I until a few years ago. Anaconda is the unofficial name given to the 5050' summit of Gordon Ridge, located about 16 miles east of Granite Falls, WA. I really have no idea where the name comes from, but my theory is that it has something to do with a mining claim or mining company. I have been up there several times, and I promise there are no Anaconda snakes to be seen anywhere. Because Anaconda is so short compared to its neighbors, it often gets overlooked as a viewpoint. Unless you look at it closely, it appears to be a wooded ridge. Conveniently, however, the top few feet of the mountain is free of trees. This makes Anaconda particularly attractive as a winter or spring climb - the avalanche danger is minimal compared to the more alpine peaks surrounding it.
Update (5-18-15): I tried out 'option 3' today, which is shorter and simpler than option 1 or 2. I would now recommend this approach as the primary, due to the poor condition of FR4039.

To get to Anaconda, park at the gated road across the Mountain Loop Highway from Red Bridge Campground (FR4037). After passing the gate, walk the road .3 miles until reaching a logging spur turning off to the right (FR4038). Walk this spur for about 2.0 miles until the road forks again (elev.2095) - this portion is in fairly good shape for walking. Now for the hard part: Take the right fork (FR4039), which will deteriorate quickly with washouts and alders. You have two options: 1.Walk this spur for .5 miles, then turn left straight uphill, or 2.Walk the spur to its end in 1.8 miles. Which option you choose will likely depend on snow cover. As you ascend upwards, you are aiming for a point about .3 miles south of the summit at about 4100' (if you chose option 2 you will see flagging guiding the way). In the picture below, look at the ridge coming in from the left. The point at which it abruptly goes from a 10 degree slope to a 45 degree slope is the point you are heading towards.

Update (Option 3): From Red Bridge, continue east on the Mountain Loop Highway for 2.5 miles to the Marten Creek Trail. The 'trailhead' is little more than a wide shoulder, which is fine, since the trail receives very little use. Follow the Marten Creek Trail north - it will start out fairly steep, and will follow an old road bed for the first mile. After the first mile, the trail will abruptly flatten out. From this point, continue another one-quarter mile, to a point where the trail is fairly close to Marten Creek. Turn left off the trail (west), and ford the creek (should be easy under most conditions). Head straight uphill (due west) for approximately 0.3 miles, until intersecting FR4039. Despite the fact that this area is second growth, the terrain is surprisingly brush-free. From this point, continue on route as described above. 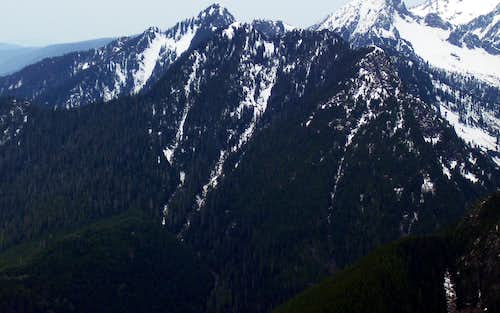 
From this point, things get steep. Time for the ice axe if snow covered, possibly crampons if icy. Follow the south ridge up too the summit, staying to the left of the crest to avoid any rock steps if necessary. When you reach the summit, please keep a safe distance from the edge until evaluating the cornice condition. The cornices on this mountain can be enormous. 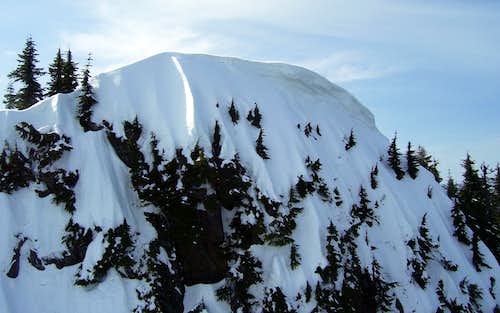 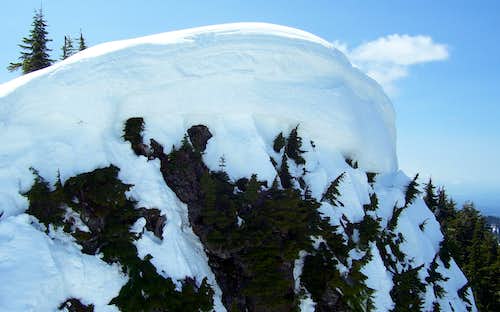 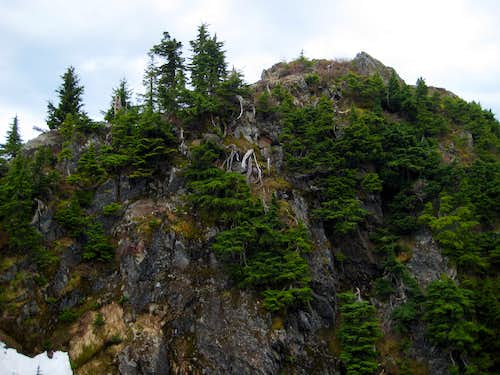 Anaconda Peak summit - May 2015. This photo is taken in an extremely low snow year, and provides an interesting contrast to the previous photo from 2011.

If you happen to be climbing Anaconda Peak in the summer, or in low snow conditions, you will be pleased to find a large, meadowy, and inviting summit area.

Anaconda Peak summit from the south
Once at the top, you will be amazed at just how good the views are from this often overlooked peak. 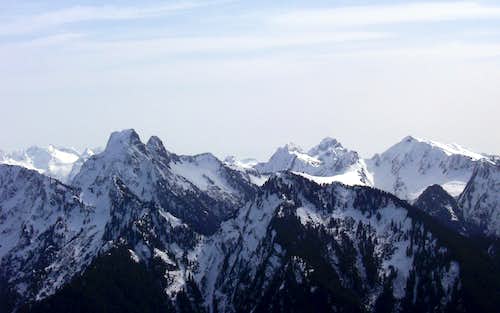 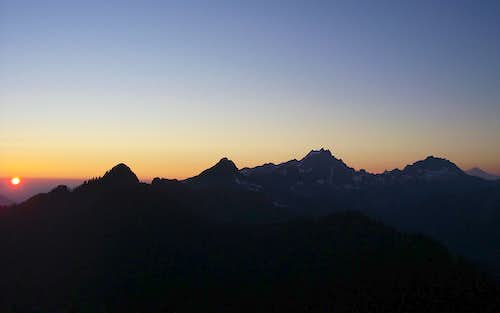 Follow the Mountain Loop Highway about 18 miles east from Granite Falls. The parking area is across from the Red Bridge Campground, which you will see after crossing (appropriately enough) a red bridge. Please park in such a way that you do not block the gate. 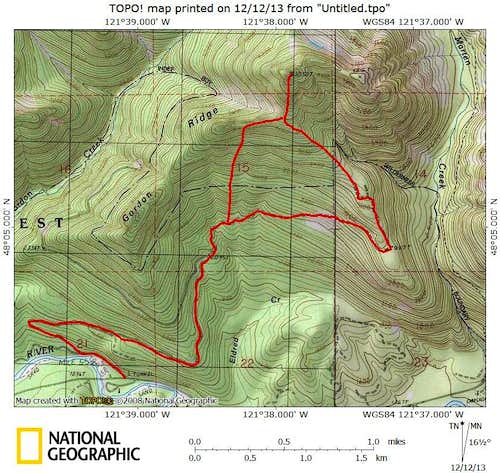 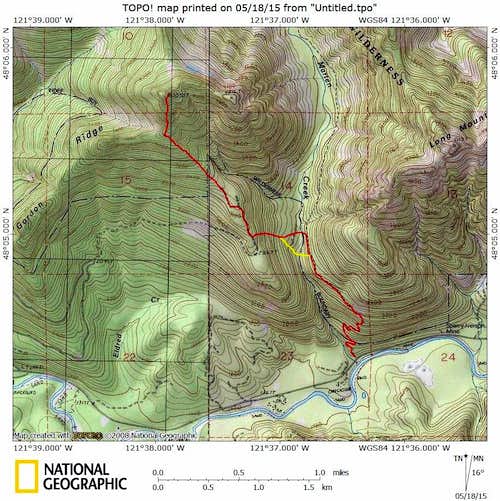 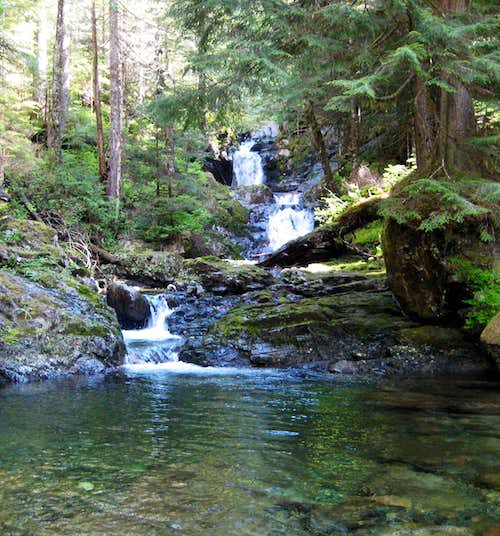 Marten Creek waterfall on Anaconda Peak route. I quite accidentally came upon this beautiful, multi-tiered waterfall when taking a slightly different route on the descent (shown in yellow above). It appears as though it would make a nice swimming hole in the summer. (N48 04.887 W121 36.872) 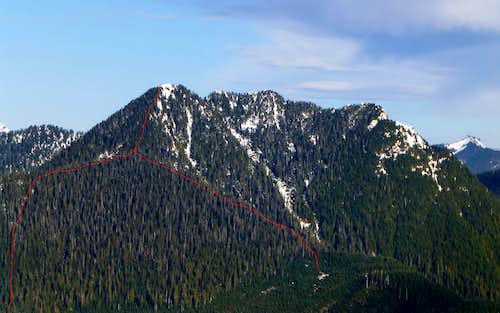 Parking permits are not required for the Marten Creek Trailhead, or the start of FR4037.

The nearest official campground is the Red Bridge Campground, right across the street from the start of FR4037. There are numerous 'unofficial' campsites along the Mountain Loop Highway if picnic tables and outhouses are too civilized for you. If you would like to camp on the route, the end of FR4039 has a large, flat, open area with a nice view. My own personal preference, however, is overnighting on the summit itself. When snow-covered, Anaconda has a large, flat summit. In the summer months, there is a flat spot about 100' west of the summit suitable for a two-man tent.