Update (5-14-14): The new/old road to Monte Cristo has been punched through - Sheep Mountain is now a bit easier to climb. From Barlow Pass, continue northeast on the gravel section of the Mountain Loop Highway for 0.6 miles, and park on the east side of the Sauk River bridge. This location is shown as 'Mowich Camp' on the route map below. (N48 01.944 W121 26.194). Walk the new/old road for about 1.5 miles, at which point you will arrive at the creek in the route description (N48 00.766 W121 26.203). Begin the route by starting uphill on the left (north) side of the creek.
Sheep Mountain is a 6166' peak located about three miles N/NW of Monte Cristo, and immediately east of Barlow Pass. It is actually one of the shorter peaks on the six mile long ridgeline extending NW from the Monte Cristo peaks - interestingly, it has the most prominence (1146'). Climbing Sheep Mountain is fairly straightforward, and no harder than class 3, but it is steep from start to finish. The route I chose is by no means the only way up this peak, but it did work well for me, and is probably the simplest route. Note: The Forest Service plans to restrict access to Monte Cristo for three years, beginning in 2013. What effect this will have on accessing this mountain, I do not know. A new road will be built on the east side of the river towards Monte Cristo. When this road is open to the public, it will actually make this climb a bit easier. Follow the Mountain Loop Highway east from Granite Falls 30.5 miles to Barlow Pass. Park here, and follow the gated gravel road towards the old ghost town of Monte Cristo. After about one mile, the road is washed out by the Sauk River. Cross the log "bridge" to the other side of the river. After crossing the river, travel downstream about 1000', where you will see a creek bed entering the river from the right. You can follow this creek bed uphill if it is dry (It will become a slot canyon after about 0.4 miles and force you into the woods to the left). If not, enter the woods on the left (north) side of the stream, and start uphill. Refer to the photo below: The gully/creek below Sloan Peak, is what you will initially follow. The climb will finish in the gully that extends down from the summit area (the leftmost of the major gullies in the photo). I will refer to this gully as the "summit gully" in the route description. 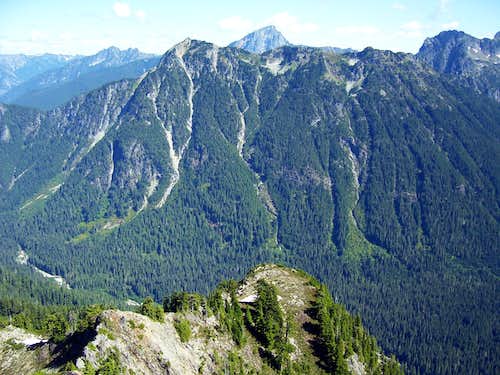 Sheep Mountain from Lewis Peak
Continue up the hill, which will become steep in a hurry. Fortunately, the woods are quite open at this point. The duff on the ground is very slick - the one piece of gear I wished I had brought with me is my instep crampons (sounds weird, but it would have made life much easier). I was able to find game trails for much of the route up the ridge, which did help a bit. At one point, I ran into a large goat - he was probably wondering what I was doing on "his" trail. The small cliff bands on the ridge are easily negotiated (usually to the left). As you ascend to about 5000', you will come to a large continuous cliff band (it appeared to me to be at least class 4 to continue straight up). Make a short traverse to the left (north) to intersect with the summit gully (ignore the two or three smaller gullies you might cross, the "summit gully" is large and obvious). I entered the gully at 5200' (N48 01.379 W121 25.312). As luck would have it, this was the highest point I could have entered the gully without cliffing out. 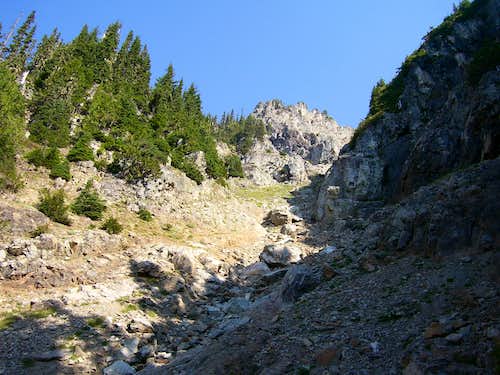 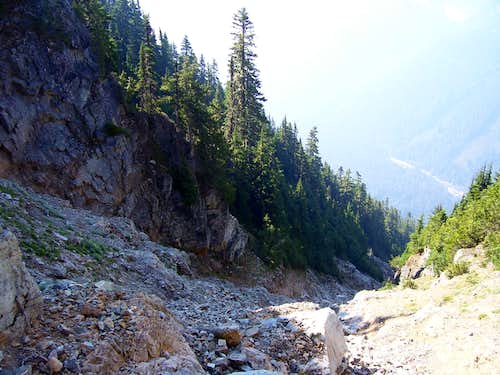 Looking down Sheep Mountain summit gully from 5300'
There is a lot of loose rock in the gully - use caution so you don't kick rocks at your climbing buddies. As you ascend to about 5500', the gully will neck down, and you will have a view of the false summit (200' west of main summit). 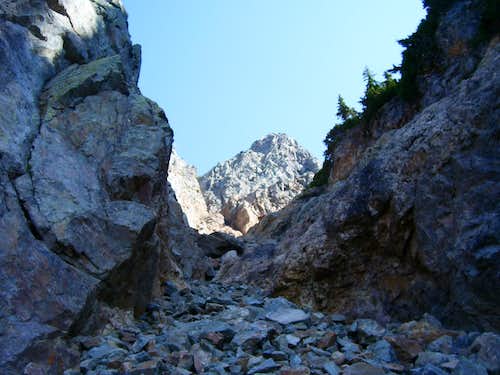 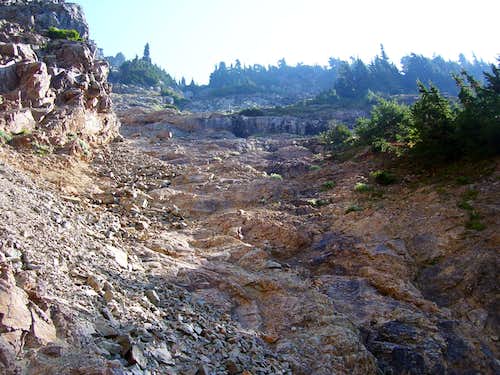 Looking up towards Sheep Mountain summit from 5700' 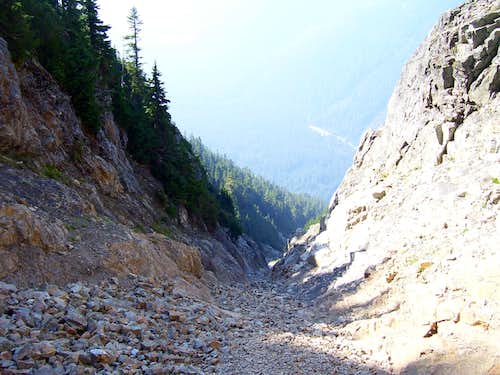 Looking down Sheep Mountain summit gully from 5700'
The final scramble to the summit is fairly simple, with minimal exposure, and a couple of class 3 moves. The final climb to the summit begins at the small tree in the photo below. 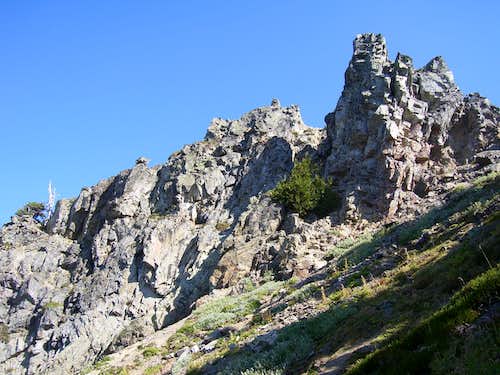 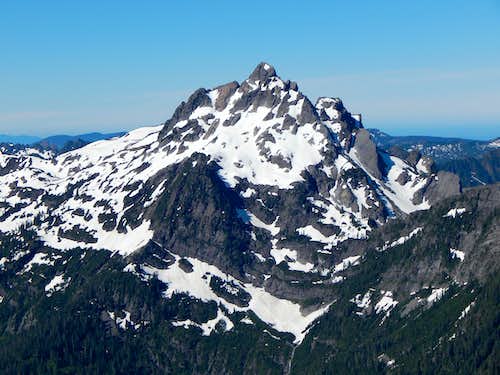 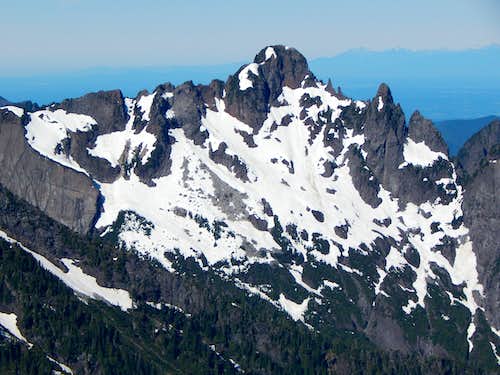 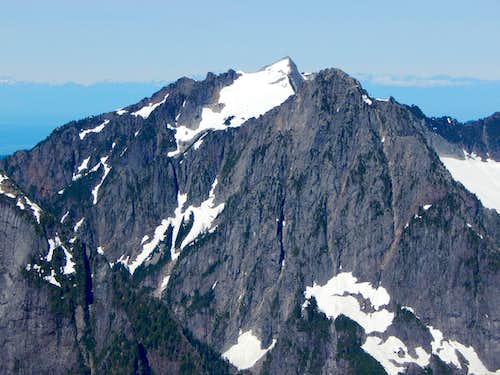 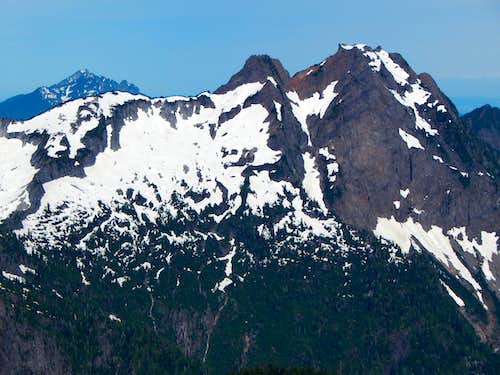 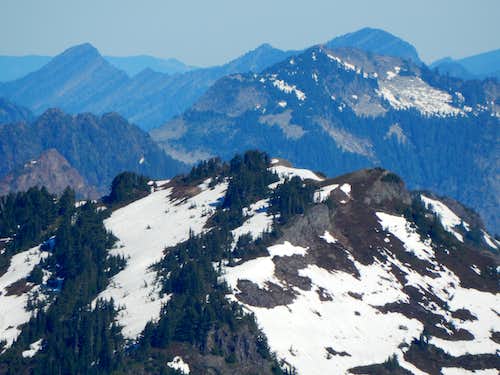 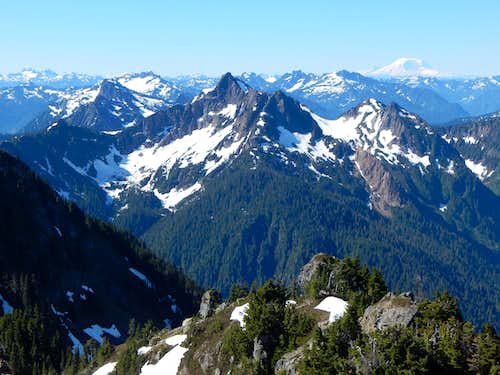 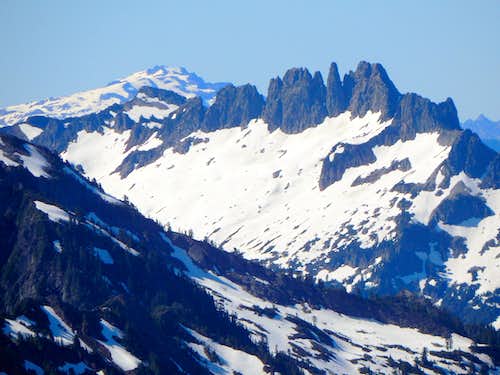 Spire Mountain from Sheep Mountain
Sheep Mountain appears as though it would be a fantastic viewpoint. Unfortunately, the Eastern Washington fires made my views very hazy. 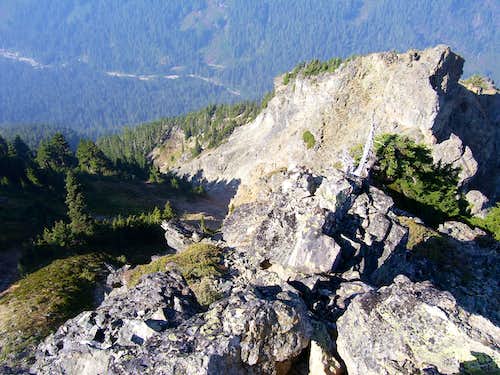 Follow the Mountain Loop Highway east from Granite Falls for 30.5 miles to Barlow Pass Trailhead. The route will start on the gated gravel road leading towards Monte Cristo. If you have a moutain bike, it will shave about ten minutes off each way. 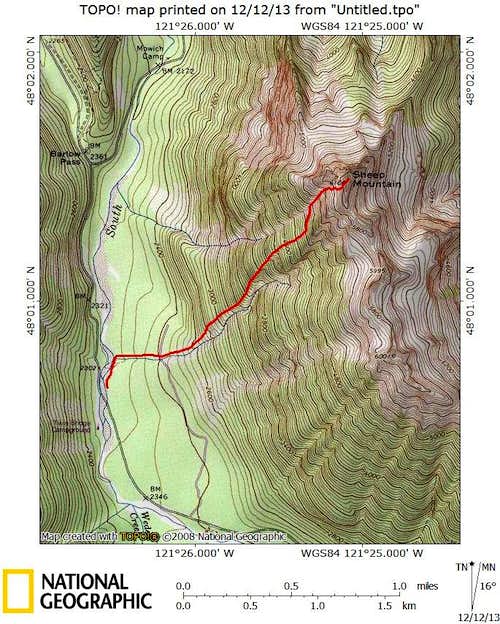 Sheep Mountain route map. When the new road to Monte Cristo is built (originating near "Mowich Camp" on the map), access to Sheep Mountain will probably be simplified.

There really is no good place to camp on Sheep Mountain itself. One could camp on the Sauk River at the base of the climb, or at any of the established campgrounds on the Mountain Loop Highway.