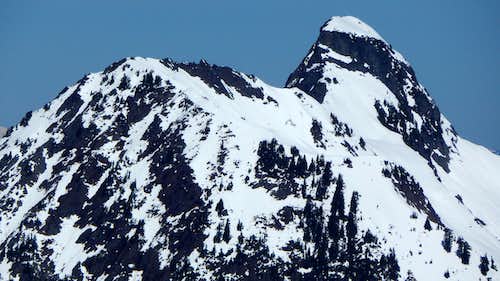 Silvertip Peak from Hubbart Peak
My climbing partner and I will sometimes refer to a particularly nasty climb as a "one-n-done". Silvertip Peak, 1.5 miles southwest of Monte Cristo, is the polar opposite of a "one-n-done". With a ghost town to explore, pleasant approach hike, good camping lake, easy and brush-free route finding, and outstanding views, this is a peak you will want to come back to. Theoretically, the peak should be called Silver Tip (after the Silver Tip mining claim), and the Cascade Alpine Guide refers to it as such. On the USGS map, however, it is labeled as Silvertip, which is probably the more "official" of the two names.
To access Silvertip Peak, follow the Mountain Loop Highway east from Granite Falls to the parking area at Barlow Pass (30 miles, elev. 2361'). Follow a gated road 4.0 miles to the old mining town of Monte Cristo (elev. 2756'). The road seems to get a little more run down each year, but a mountain bike will still save you some time. There is a bike rack in Monte Cristo near the trailhead for locking up bikes. From Monte Cristo, find Forest Service trail #708, and follow it 2.5 miles to Poodle Dog Pass and Silver Lake. Arriving at Silver Lake, you will have your first good view of Silvertip and the climbing route. For those planning to stay overnight, this is a logical place to camp.

Update: For those who intend to mountain bike to Monte Cristo, the 'new' road may be an equal, if not better option. From Barlow Pass, continue on the unpaved portion of the Mountain Loop Highway for 0.6 miles, where a bridge will cross the South Fork Sauk River. Just a short distance past this bridge, locate a gated road on the right (not shown on the USGS map). While this 'new' road to Monte Cristo is slightly longer and has greater elevation gain, it is completely rideable, and does not require a river crossing. 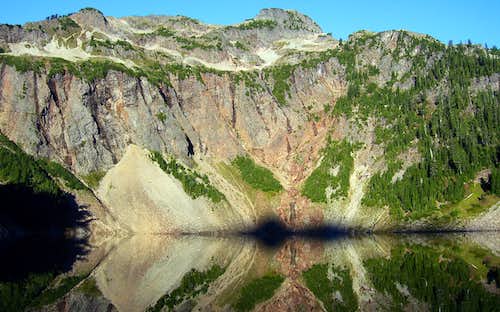 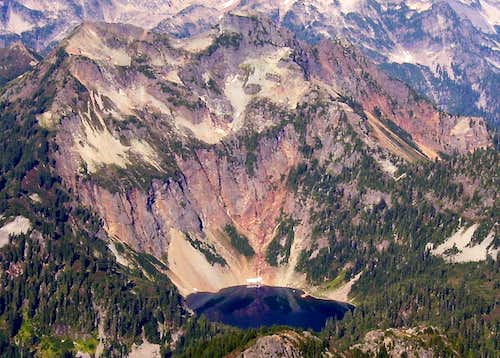 Cross the lake's outlet, and hike southwest to the top of the ridge south of the lake at about 4900'. There are a couple of poorly defined climber's paths that will consolidate into one path at the top of the ridge. Now follow the ridge about .6 miles to the south summit of Silvertip (6000'+, class 2). For those not interested in class 4 climbing, this point will provide generous views without the exposure or need to carry rope. To continue to the summit block, drop down slightly, and follow Silvertip's south ridge on its east side. Travel on the ridge crest or west side is not recommended. 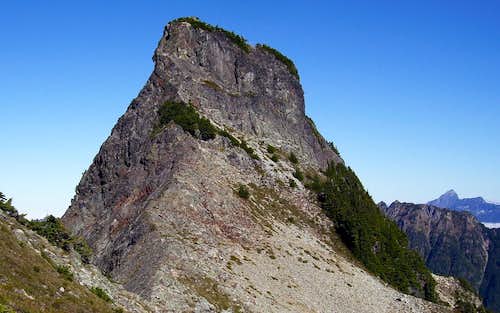 From the 5900' saddle below the summit block, class 3 climbing will bring you up to one bench (marked by small group of trees in picture), then a second bench. From here, turn left to find the class 4 climbing route. It is defined in the photo by a small black shadow on the upper left corner of the summit block. Yes, it is as exposed as it looks. Someone has left a length of rope here that extends down from the rappel point. I have no idea how old it is, so it would be advisable not to trust it. The climbing is not difficult, but watch out for possible loose rock near the very top. The climbing route will also serve as the rappel route. 100' of rope will get you off the mountain, but a 150-200' rope would allow you to skip some class 3 downclimbing on loose rock. For those who don't like so much air under their feet while rappeling, another option is to rappel to the upper bench from the central south face. This is defined in the photo by a vertical shadow in the center of the upper summit block. 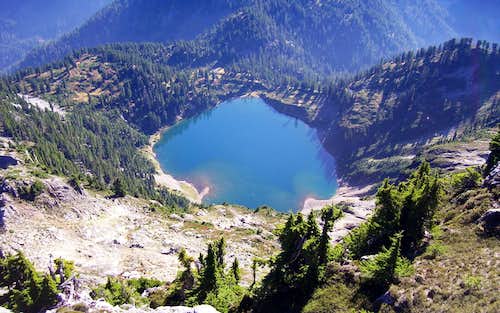 Take the Mountain Loop Highway east from Granite Falls for 30.5 miles. When you get to the end of the pavement, you have found Barlow Pass. Parking can be found on both sides of the highway. The left fork of the road continues to Darrington, while the gated right fork leads to Monte Cristo in four miles. 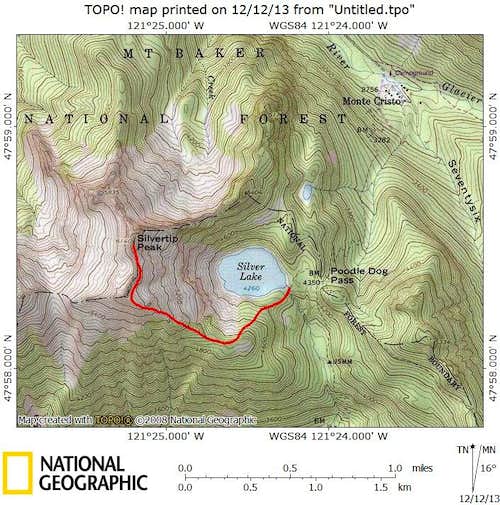 Great camping is available at Silver Lake. Parties with extra energy can combine this trip with a climb of nearby Columbia Peak.

I climbed this on 8/1/2020 and found the rope for the rappel section to be in seriously bad condition. It was frayed in multiple spots, cracked and damaged all over. I removed it along with several very worn nylon runners. I did leave behind my own runner and the rappel rings which were in great shape still and used that to rappel off the summit with a 30m rope.