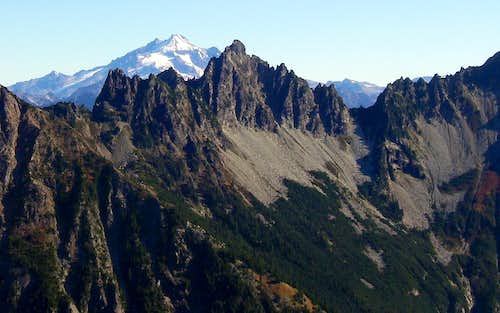 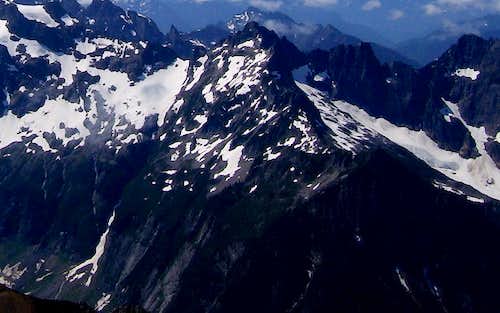 Foggy Peak from Sloan Peak. Hubbart Peak in the background.
Foggy Peak is a mountain located just 1.5 miles northeast of the old ghost town of Monte Cristo. While not particularly prominent (750'), its steep summit block makes it look fairly impressive, particularly when viewed from the north or south. Foggy Peak does not seem to get many visitors (based on its film canister register), and this may be partially to blame on the lack of route information online. Hopefully this page will help revive a little interest in this very worthy objective.

Take the Mountain Loop Highway east from Granite Falls for 30.5 miles. When you get to the end of the pavement, you have found Barlow Pass. Parking can be found on both sides of the highway. The left fork of the road continues to Darrington, while the gated right fork leads to Monte Cristo in four miles. A mountain bike is not a necessity for accessing the Monte Cristo townsite, but it certainly will make your day a little nicer.
Update: For those who intend to mountain bike to Monte Cristo, the 'new' road may be an equal, if not better option. From Barlow Pass, continue on the unpaved portion of the Mountain Loop Highway for 0.6 miles, where a bridge will cross the South Fork Sauk River. Just a short distance past this bridge, locate a gated road on the right (not shown on the USGS map). While this 'new' road to Monte Cristo is slightly longer and has greater elevation gain, it is completely rideable, and does not require a river crossing.

From Monte Cristo, hike the Glacier Basin trail for approximately 1.5 miles, a short distance above Glacier Falls. The point at which you want to leave the trail is at approximately 4200', at which point you should have easy, brush-free access to Glacier Creek. (N47 59.148 W121 22.026) The photo below was taken from this point. 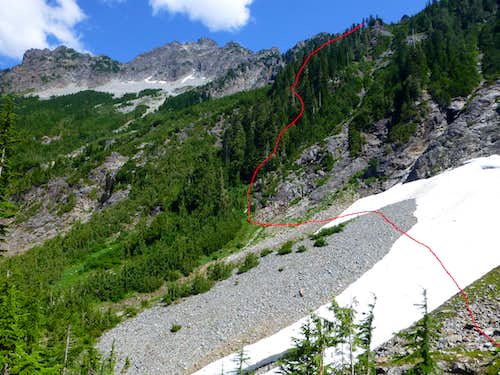 This is the view from the Glacier Basin trail of the timbered ridge used to access Foggy Peak's upper slopes.
Cross Glacier Creek, then begin a near level traverse to the base of a timbered ridge. This ridge should be fairly obvious, as it's the only one in the area with large trees on it. Begin up the timbered ridge, initially staying on the right side (less brush). The going will be steep, but there will be plenty of vegetation to help you up the slope. After several hundred vertical feet, you will want to start transitioning to the left side of the ridge - this will help you avoid some small cliff bands. We found a nice game trail (Starting at N47 59.285 W121 21.949) which helped us do just that. Continue climbing up the ridge until anywhere from 4800' to 5300'. Where you decide to turn left off the ridge to start traversing towards Foggy Peak is really a matter of personal preference. Refer to the photo below.

This photo is taken from the top of the timbered ridge near 5100'. Red line shows our route - yellow lines show optional routes.
Generally speaking, the lower you start your traverse, the more brush you will need to deal with. For a completely brush free experience, you can climb up to 5300' to start the traverse, but you will also add several hundred feet of elevation gain to your trip. We made the traverse at 5100', and found it to be a good compromise. We made a mostly level traverse, to the base of a cliffy ridge located at (N47 59.556 W121 22.002 Elev. 5100'). After getting around this nuisance ridge, we turned right, and started straight up the talus slopes towards Foggy Peak's summit gully. 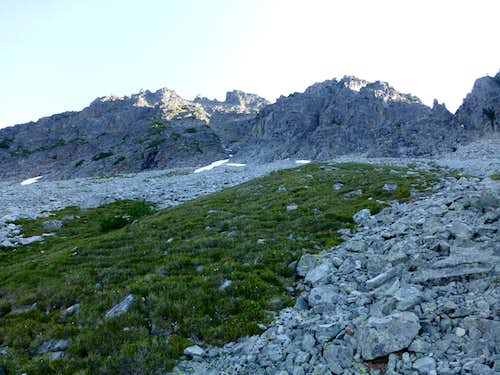 Approaching Foggy Peak's summit gully
The snowfield in the gully entrance should not have been too much of a problem, but for us it was. Had we climbed earlier (July), we probably could have traveled right up the snowfield into the gully. Had we climbed later (September), there probably would not have been any snow to deal with. As it was, the snow was ice-hard, with deep moats on the right side, and huge overhangs on the left. We finally ended up scrambling the rock to the left of the snowfield, and had to do a little class 4 climbing to get to the upper gully. Downclimbing this section was the only time we used our rope on the climb. Continue up the gully, alternating left and right as necessary, aiming for a spot just to the left (west) of the summit block. 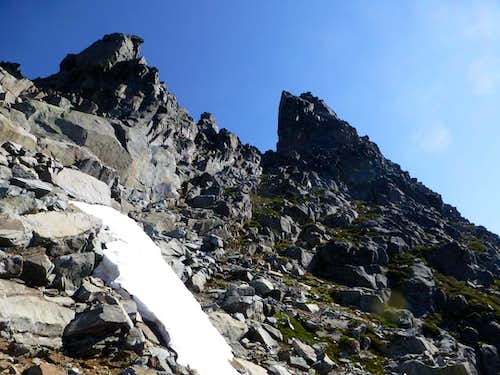 The summit is the point on the right - not nearly as scary as it looks.
The climbing is mostly class 3, but it is steep, and there is plenty of loose rock. I don't wear a helmet that much, but I would consider it a requirement for anyone other than the leader in this gully. The photo below shows the short scramble section from the notch west of the summit. 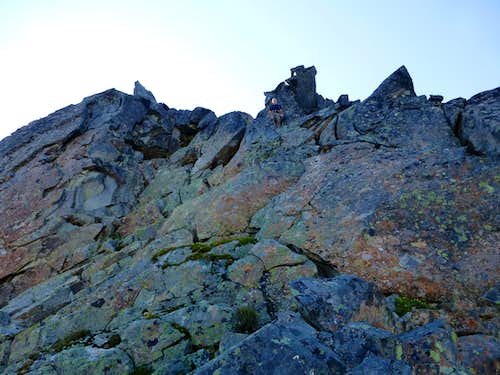 This photo is taken from the notch immediately to the west of Foggy peak's summit. It is described as class 4 in the Beckey guide, but we had no reservations about climbing and downclimbing unroped (felt more class 3ish).
If you choose your route carefully, the final scramble should not be harder than class 3. There is a little exposure, so a short rope might help on the downclimb if you are skittish about such things. Arriving on the summit, you should find yourself very pleased with the views. 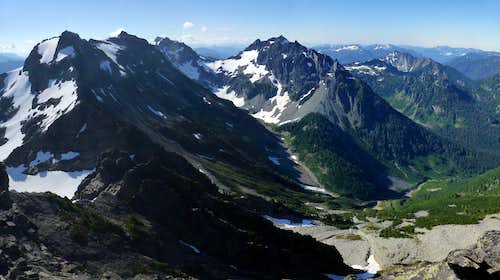 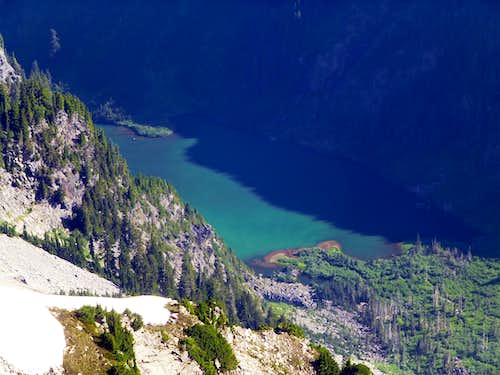 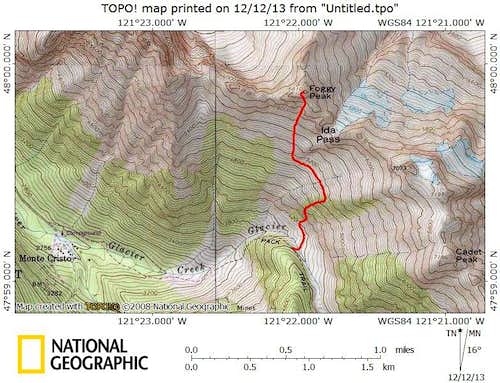 A Northwest Forest Pass is required to park at Barlow Pass.
Note: The Forest Service originally had plans to restrict access to the Monte Cristo area beginning summer 2013 through 2015. At the time of our climb (August 2013), these restrictions had not yet taken effect. Please check Mount Baker Snoqualmie National Forest road and trail conditions online before any trip to Monte Cristo.

Glacier Basin would make a great camp for a climb of Foggy Peak. It can be found just up the trail from the start of the climbing route. From here, one can also make climbs of Cadet Peak and Monte Cristo Peak.