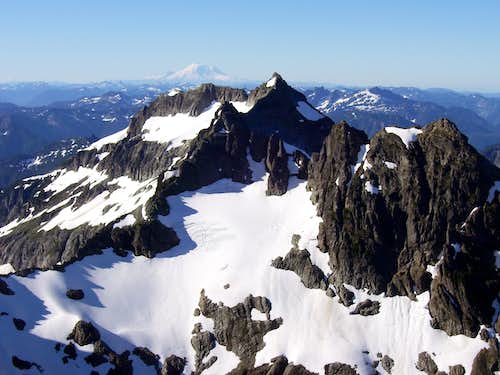 Columbia Peak from Cadet Peak
Columbia Peak is one of the "Big Three" in the Monte Cristo subrange of peaks. While slightly lower in elevation than Kyes or Cadet, it stands alone, and has a respectable 1132' of prominence. Views from the summit are grand, and nearby lakes offer good camping. The approach to Columbia is relatively easy and brush free, and the mountain does not require rope or rock climbing gear to summit. Fred Beckey describes Columbia as "worthy of a summit pilgrimage for the view alone", an assesment I concur with.

To access Columbia peak, follow the Mountain Loop Highway east from Granite Falls to the Barlow Pass parking area (30.5 miles). From here, follow a gated gravel road 4.0 miles to the old mining town of Monte Cristo. A mountain bike is not necessary, but is recommended as a time saver.
Update: For those who intend to mountain bike to Monte Cristo, the 'new' road may be an equal, if not better option. From Barlow Pass, continue on the unpaved portion of the Mountain Loop Highway for 0.6 miles, where a bridge will cross the South Fork Sauk River. Just a short distance past this bridge, locate a gated road on the right (not shown on the USGS map). While this 'new' road to Monte Cristo is slightly longer and has greater elevation gain, it is completely rideable, and does not require a river crossing.

From Monte Cristo, follow Forest Service trail #708 to Poodle Dog Pass, then continue up the trail towards Twin Lakes. Before reaching the Twin Lakes overlook (approximately four miles), turn left off the trail, and traverse east on the north side of the ridge separating Twin Lakes from Seventysix Gulch. After approximately .5 miles, its time to go up. Refer to the picture below. 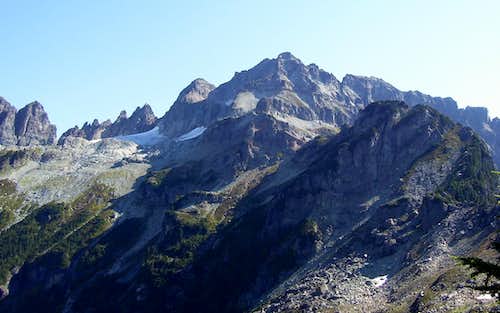 On the far right edge of the picture, notice an obvious rock and heather slope which will allow you to bypass the cliff bands on the 6000' high point in the ridge. After climbing this slope, the route will transition to the south side of the ridge. Now you should have a view that looks something like the photo below. 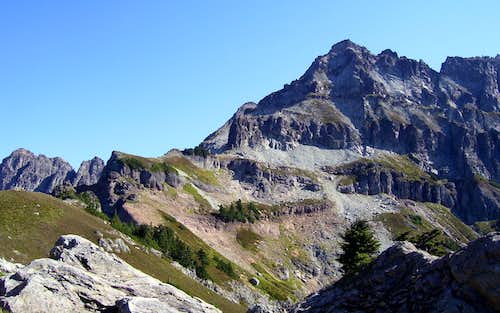 Columbia Peak from 5900' on West Ridge

Notice the cliff band that terminates as a rocky buttress in the center of the photo. The climbing route takes you around the left side of this buttress, then up and right to access the gully on Columbia's SW face (above the aforementioned cliff band). Before getting into the gully proper, there will be one short section that could possibly be described as class 4, but the exposure is quite minimal. As you enter the gully, it will be time to strap on your brain buckets (also known as helmets). The climbing here is not difficult (class 3), but it is steep, and any rocks kicked loose by your climbing buddy will reach skull-splitting velocity in short order. The far left side of the gully seems to offer easier climbing, but with more loose rock than the center of the gully - which you choose is really a matter of personal preference. As you near the summit, traverse left and clockwise around the summit block. The very last part of the climb will finish on the north side of the summit (class 2).

On the summit, views will rival those of Kyes, Cadet, and even Sloan. 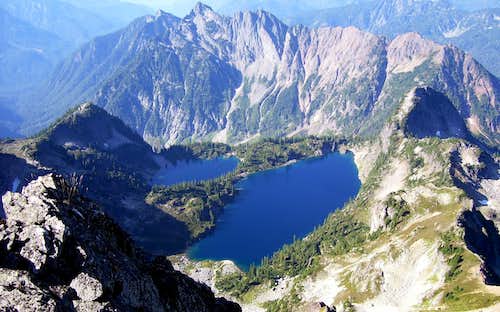 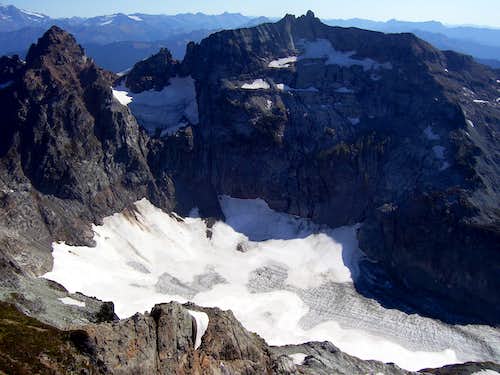 Take the Mountain Loop Highway east from Granite Falls for 30.5 miles. When you get to the end of the pavement, you have found Barlow Pass. Parking can be found on both sides of the highway. The left fork of the road continues to Darrington, while the gated right fork leads to Monte Cristo in four miles.

There are a number of camping possibilities on this route. Silver Lake would be a good camp, particularly if you wish to combine this climb with a Silvertip Peak climb. Twin Lakes are another potential camp, but this would add at least 600' additional elevation gain.