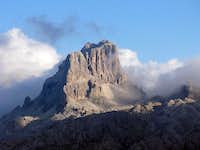 Branko - From above the Falzarego 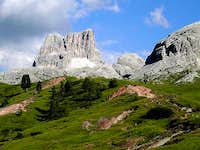 gabriele - From the NW 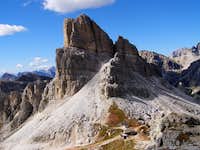 Between the Passo Falzarego, 2105 m, and Passo Giau, 2236 m, there lies a nice and popular mountain group, usually referred as Averau-Nuvolau group. It consists of a handful of lower, but typically dolomitic mountains, which are due to their good accessibility, nice look and great panoramas very popular. This is the playground of the nearby Cortina d'Ampezzo town. In order not to have too many levels of grupation, I shall post separate pages, one for each major mountain of the group. Here is a more extensive list, in the east-west direction:

See the below map-guidebook for also other mountains! 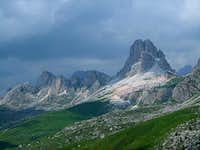 Ejnar Fjerdingstad - Averau from the SE

Averau is the highest mountain in the group. Especially from the south-east it looks like a giant bunch of towers, with almost vertical east and south walls. The northern side is a bit less steep, but a vertical step in the middle also causes that also the normal approach needs some 50 meters of a medium hard ferrata. Towards the west a sharp ridge continues towards Punta Gallina. Due to many neighbouring huts, cableways and marked paths Averau is often ascended. Actually it rises only good 200 meters above the plateau and saddles, over which all the tourist traffic goes. But still, only one route for non-climbers reaches the top itself. This is the Averau ferrata, requiring also some 50 meters of climbing. 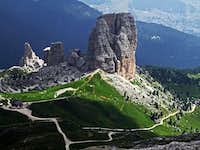 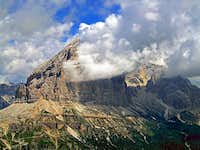 From the summit we have a great view on the Dolomites world. Tofana south face and the Cinque Torri group in front are especially appealing. Left of Tofana the group of Fanes is nicely seen, then towards the west all major, more remote Dolomites giants. On Marmolada we can clearly distinguish ski pistes, broad is also the view towards the south. Very nice is also the eastern horizon - above the more closely standing sharp peaks the giants of the Eastern dolomites are rising: Civetta, Pelmo, Antelao, Sorapiss... 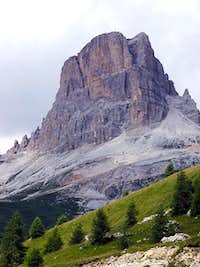 Ejnar Fjerdingstad - Averau from the S 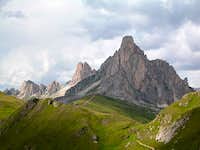 For a broader picture, see the pages: Cortina Dolomites and Dolomites! Falzarego pass, 2105 m, lies on the main Dolomites panoramic road. From this road a mountain road, closed for public traffic, deters up to Rif. Cinque Torri, 2137 m. The nearby Rif. Scoiattoli, 2225 m, is reachable by the cableway, which has its bottom station by the Cortina - Falzarego road. Passo Giau, 2236 m, lies on the road, connecting Pocol just above Cortina and the lower Cordevole valley. By the Cordevole side of Passo Giau road, at Rif. Fedare, 200 m, lies the bottom station of the chair-lift, which goes up to Rif. Averau, 2413 m, on Forcella Nuvolau. In winter in this mountain group also many ski devices operate. 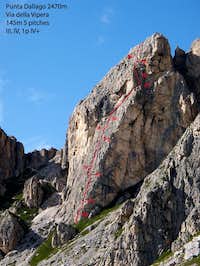 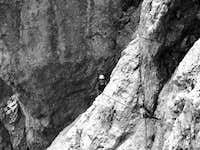 From Forcella Nuvolau 2413 m, 45 min, trail marked, in the middle part a medium hard ferrata. Enough iron, all reliable. Around the eastern side of Averau we cross the screes slightly up, then soon turn left and in a few turns reach the ferrata entry (15 min). The first part of ferrata is the hardest. An almost vertical part brings us soon on a tiny ledge, from where two options continue. This is welcomed, because also all the traffic down goes by this ferrata. Going up the left variant enters a narrow chimney, where we find some 5 meters high ladder. On top, the chimney is closed with a rock, so we must climb through a natural window. Above the window we cross again towards the right, where both variants join. The direct variant is a bit harder than the ladder. It requires some power in hands, but as it is well secured, there are no bigger problems. We ascend some 10 meters high vertical wall and soon the main troubles are over. The continuation is easier, but we are still in the middle of a very steep rock face. Climbing up we soon reach a narrow ledge, which leads towards the right. This is very welcomed, since it minimises the chance of stone falls, caused by climbers. Finally we enter the exit ravine, where we climb over the rocks of its right side. On top the ferrata is over. The last 100 meters to the summit we scramble over steep slopes, following the trail. A secure step and some care is needed, but the trail is no more iron-protected. Gear: for less confident a ferrata set recommended.