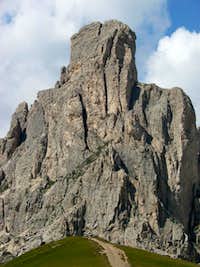 Between Passo Falzarego, 2105 m, and Passo Giau, 2236 m, there lies a nice and popular mountain group, usually referred as Averau-Nuvolau group. It consists of a handful of lower, but typically dolomitic mountains, which are due to their good accessibility, nice look and great panoramas very popular. This is the playground of the nearby Cortina d'Ampezzo town. In order not to have too many levels of grupation, I shall post separate pages, one for each major mountain of the group. Here is a more extensive list, in the east-west direction:

From the summit we have a striking view down on Passo Giau and all around on the giants of Dolomites. The view on Nuvolau with the hut on top is probably most interesting from Ra Gusela side.

And finally, east of the summit there's another, lower tower. It's called Torre Luisa and has an elevation of 2428 m. The eastern wall is almost vertical, hosting a popular Via Ghedina route (UIAA V+)

For a broader picture, see the pages: Cortina Dolomites and Dolomites!

Falzarego pass, 2105 m, lies on the main Dolomites panoramic road. From this road a mountain road, closed for public traffic, deters up to Rif. Cinque Torri, 2137 m. The nearby Rif. Scoiattoli, 2225 m, is reachable by the cableway, which has its bottom station by the Cortina - Falzarego road.

Passo Giau, 2236 m, lies on the road, connecting Pocol just above Cortina and the lower Cordevole valley. By the Cordevole side of Passo Giau road, at Rif. Fedare, 200 m, lies the bottom station of the chair-lift, which goes up to Rif. Averau, 2413 m, on Forcella Nuvolau. In winter in this mountain group also many ski devices operate. 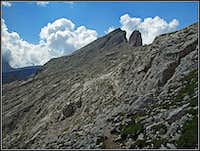 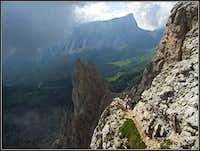 1. Ferrata from Passo Giau. Around the eastern and northern side of Ra Gusela the trail No. 443 goes. Easy walk. On the map, the trail to the ferrata entry is drawn closer to Passo Giau, but as that path is much deteriorated it is better to continue around the mountain till the well marked crossroad, where we deter left. Now we ascend over moderately steep slopes in many turns, finally reaching the Gusela walls. Through a ravine we ascend on a small notch, where the ferrata starts. It is very short and fairly easy. Over the first rocks we go up towards the right, cross by a ledge shortly horizontally towards the right and through a short, again steeper ravine exit on the upper plateau. A nice view on Nuvolau and right behind it on Averau opens. The summit of Ra Gusela rises towards the left above the karst plateau, but we must first cross the plateau almost to the point, where the trail starts ascending on Nuvolau. There we leave the marked path, deterring left and ascend the summit of Ra Gusela by a still clearly seen trail. Only in the upper part the trail requires some care and a safe step. 1 h 15 min from Passo Giau.

2. From Rif. Nuvolau. By the summit ferrata of Nuvolau we descend 10 minutes and on the first occasion take the trail, which crosses the slopes below the connecting ridge. Below the summit of Ra Gusela this trail hits the trail, coming up from the left. Some 20 minutes. 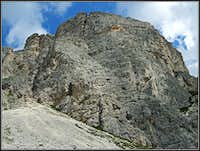 If you have more data about Ra Gusela climbs, please post!