A Mountain of Contradictions 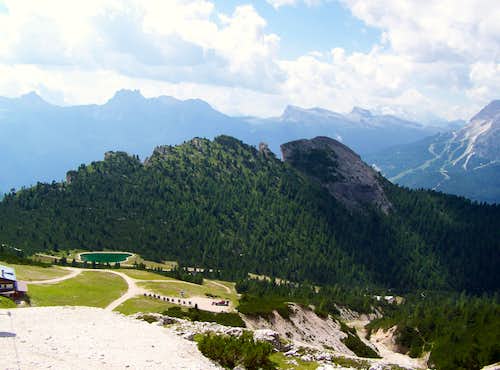 The gentle side
It's almost 1000 m lower than its big neighbour: the massive of Cristallo. When descending from Cristallo using the cable-cabin, you can enjoy the panoramic view, and in the depth you can see a small green hill: it is Garòles. But looking at Garòles from the other side, from the city of Cortina it seems to be a giant, towering 1000 m above the city.

The NNE side of the mountain is a modest green hillside, with an approximate 35 degree green slope mainly covered by forest. The opposite, SSW side is an almost vertical bare rock wall.

Route no.205 along the north hillside of the mountain is crowded by hikers. But the peak itself is lonely. I found a log-box on the summit, with a notebook in it. The total number of the logs was not more than 30-40 signs in the last 3 years. I visited the peak in August 2011, and the previous log was from 2010!

The silent, lonely and beautiful mountain is in contrast with the remains of the trench of World War I cut into the rock some hundred meters south of the peak. This trench is reinforced by stone masonry. You can also see a smoky cave here that was used by the poor soldiers as a refuge. 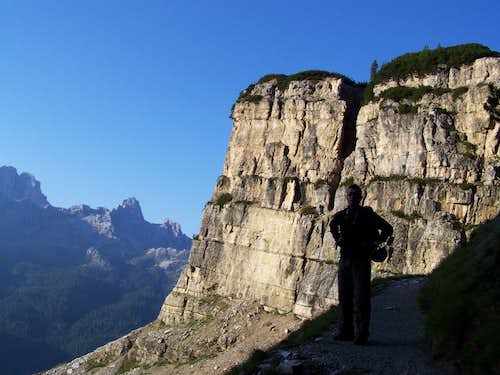 At Passo San Fórcia
Though the indicative col for the prominence of Garòles is Passo Són Fórcia (2130 m) that links this mountain to the massive of Cristallo, in reality Garòles is part of the long structure formed by the bigger Pomagagnon and by the mountain of our subject. Pomagagnon and Garòles are separated by the saddle called Forcella de Zumeles (2072 m).

North of the long ridge of Pomagagnon and Garòles you can find the valley called Gran Valle (with the routes no. 201, 202, 203, 204 and 205 in it). The stream of this valley is Rio Bosco. South of the mountain chain you can see the famous resort Cortina d'Ampezzo in the valley called Valle d'Ampezzo.

On this page I call this mountain consequently as Garòles. This is how it is indicated on my map. Gabriele found another map with the same name. But this name doesn't appear in internet sources, and other printed maps indicate the mountain with different names. For the ridge the term Crepe de Zumèles is used - between Punta Erbing and Passo Són Fórcia. The main peak is called also Pala Peròsego. And the smaller but impressive rock tower east to the big crack is called Campanile Peròsego. 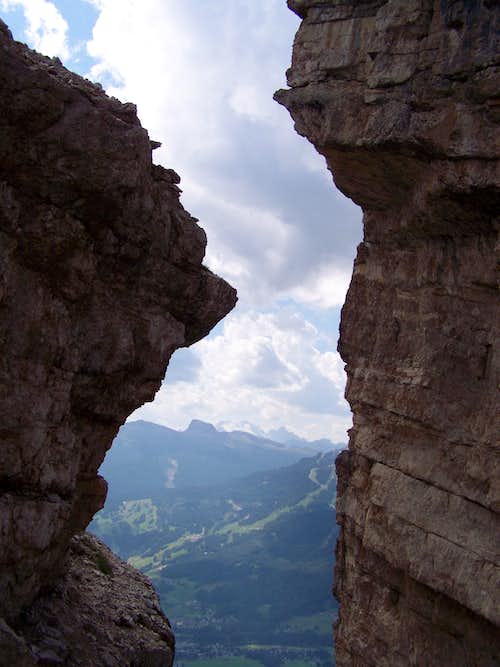 The big crack
I don't describe where Cortina d'Ampezzo is. You can find it on all relating maps. But here you can find information how you can get there by public traffic

How to get from Cortina to Garòles? The easiest approach is either from Passo Tre Croci or from Ristorante Rio Gere. Passo Tre Croci is approximately a 7 km car drive from Cortina, in eastern direction. You can leave your car at the pass. This pass is in 1808 m altituide. Ristorante Rio Gere is on the same road, but 2 km nearer to Cortina. 1698 m altitude, huge parking place.

As no marked trail leads to the summit, you are obliged to find your way yourself. There are 2 hardly visible paths going up on the slope south to route no.205. One path a fewhundred meters east to the peak, another one (the better one) west to the summit. But as route no.205 leads in forest, you can not easily identify where exactly the summit is. Here the most intresting character of Garòles can help you. There is a huge V shaped crack near the peak, just on its east side. This crack can help you in orientation.

If you find one of the poor paths up to the summit, then you can easily get up - almost to the top of the peak. But the last 10 vertical meters are not so easy: exposed scrambling, loose and falling rocks. Take care or stay down!

The view of Pomagagnon
Excellent panoramic view with some of the most important mountains of the Dolomites:

You can find a log box with a notebook a few meters northwest to the summit, fixed by some stones. 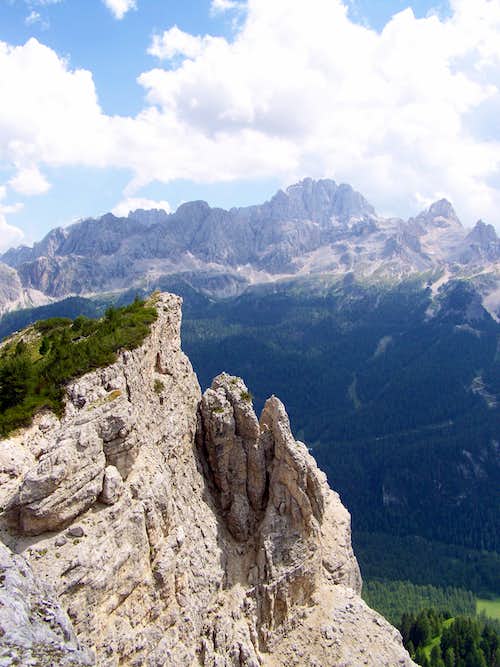 The view of Sorapiss (3205 m)
No special restrictions in the area. 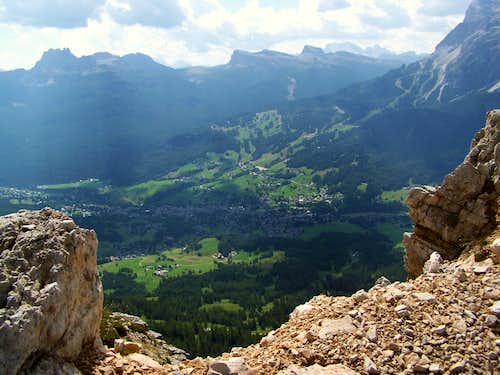